Multiple media outlets confirmed on Wednesday and Thursday the growing presence of impromptu vendors this week in and around Kabul’s international airport, selling basics like food and water for outrageous prices and refusing to accept payment not in U.S. dollars.

Kabul’s airport attracted a mob estimated to be of thousands of people in the immediate aftermath of the Taliban jihadist organization’s conquest of Afghanistan, completed on August 15. While multiple Western countries have evacuated tens of thousands of people from the airport, the large crowds have persisted, even as the Taliban warned it would not allow Afghan nationals to leave the country on rescue flights.

The Taliban announced the ban on letting Afghans leave on Tuesday. By Wednesday, harrowing scenes of large crowds of people attempting to enter the airport through the sewage system surfaced. Many have spent days at the airport with no food or water, enduring extreme summer temperatures. 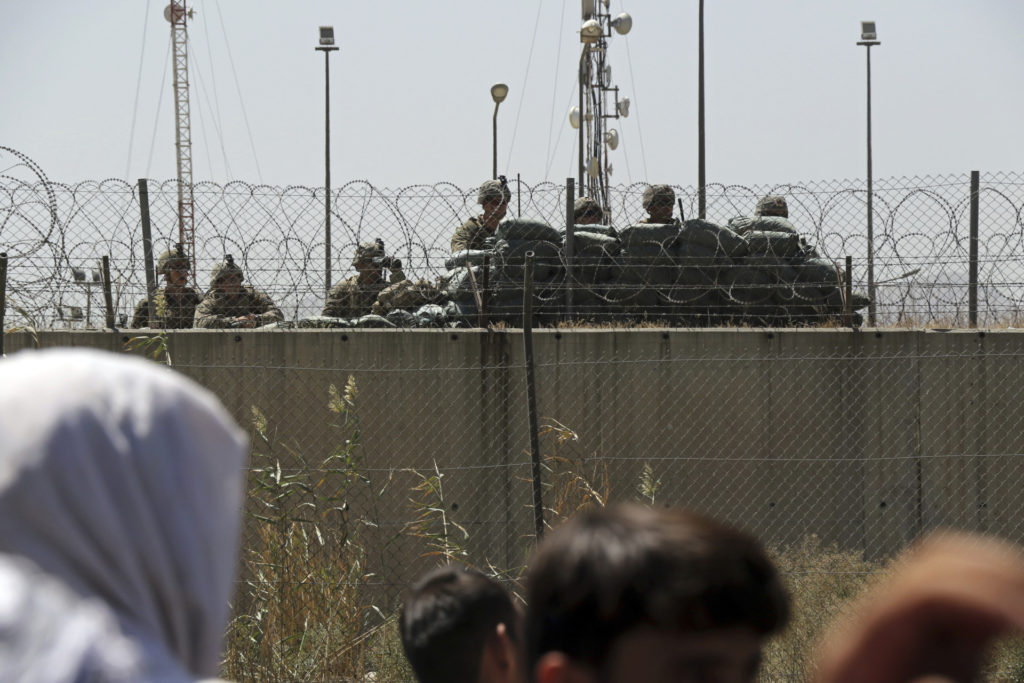 U.S. soldiers stand guard inside the airport walls as hundreds of people gather near an evacuation control checkpoint on the perimeter of the Hamid Karzai International Airport, in Kabul, Afghanistan, Thursday, Aug. 26, 2021.  (AP Photo/Wali Sabawoon)

In an exclusive report from Kabul’s international airport airing on Wednesday, India’s Zee News reported that the large crowds had created a dangerous, unsanitary situation and that many who had spent days at the airport were facing significant health repercussions from the lack of food and water.

“There are many people who do not have money left for buying water or food. The water that is available outside the airport is so expensive that most people cannot even think of buying it,” the outlet reported. “The cost of a bottle of water outside the Kabul airport is up to 40 US Dollars i.e. about 3 thousand rupees, whereas for a plate of rice people have to pay 100 US Dollars i.e. over seven thousand rupees.”

“To make things worse, only those people who have the US currency can get this water and food,” Zee News noted. The outlet’s reporter also found that many Afghans had spent the “last several days” in a sewage drain outside the airport, looking for a way in, adding, “it is difficult for any person to stand even for 10 minutes in this part of the airport.”

Zee News estimated that 50,000 people were surrounding the airport.

Reuters reported the same prices for the same food products at the airport, again adding that the vendors are refusing to accept Afghan currency. The reports do not give any indication of who the vendors are, where they are getting their rice, or how they have persisted in attempting to price gouge the populace given that the Taliban claimed to have banned Afghans from the airport and area immediately outside of it.

The demand for U.S. dollars appears to be a response to the fact that the currency has been nearly completely unobtainable since the Taliban seized control of the country this month. Most of Kabul’s ATMs appear not to be working and banks do not have the assets to tend to their customers, Deutsche Welle reported on Wednesday.

“The situation with the banks is very bad. People queue up in front of banks, but they remain closed. No one has access to banks, especially in Kabul,” a Kabul resident identified as Said Imam told the German outlet. “Some people haven’t been paid for more than a month. Government servants and teachers didn’t receive their salaries. People are running out of cash with their savings locked up in banks.”

Even outside the airport, Imam said, finding basic food items for reasonable prices has become difficult due to shortages of both the food itself and the money to buy it.

“You can find food items in the market, but the prices are high,” Imam explained. “For example, a month ago the price of a bag of flour was 1800 afghanis, now you have to pay 2180 afghanis. The price of 16-liter oil can jumped to 2150 afghanis from 1700 afghanis.” 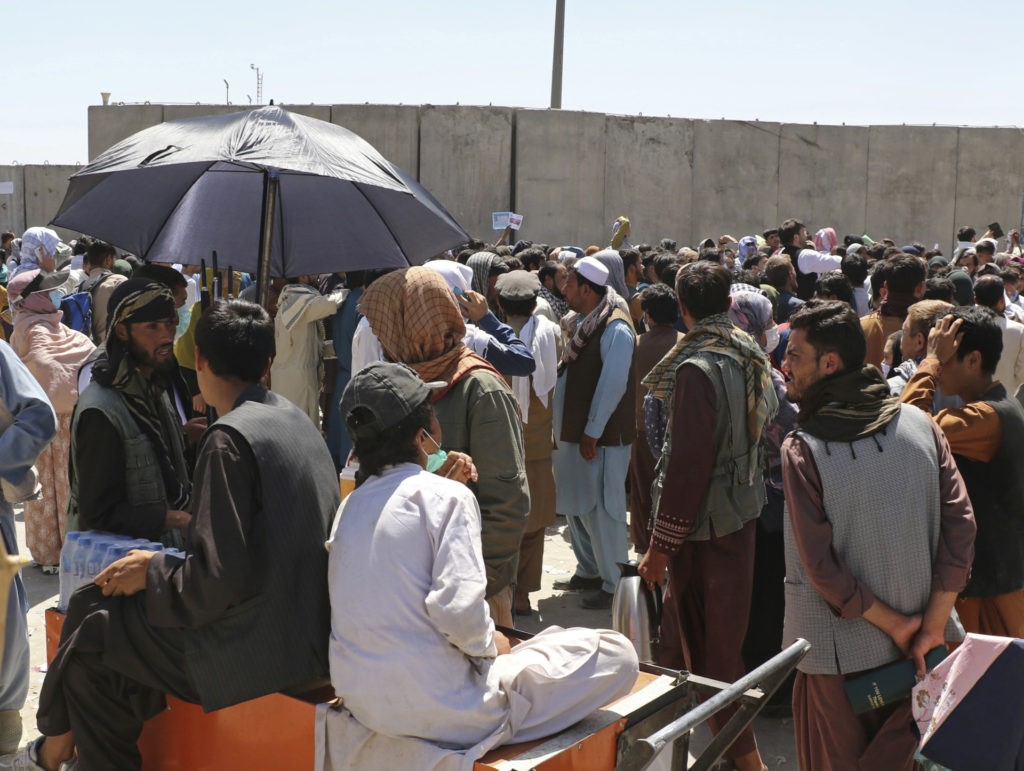 Hundreds of people near an evacuation control checkpoint and food vendor on the perimeter of the Hamid Karzai International Airport, in Kabul, Afghanistan, Thursday, Aug. 26, 2021.  (AP Photo/Wali Sabawoon)

In a press conference on Tuesday, Taliban spokesman Zabihullah Mujahid told reporters that the terrorist group had banned all Afghan nationals from the airport for their own safety – and to protect the Afghan economy by preventing skilled workers from taking their talents elsewhere.

“The crowd gathered at the airport can go home. The Taliban guarantees their security,” Mujahid said.

“The way to the airport has been closed now. Afghans are not allowed to go there now, foreigners are allowed to go but we have stopped Afghan nationals to go because the crowd is more,” he added, “there is danger that people will lose their lives, there might be a stampede.”

At least one explosion of an unknown nature occurred at one of the airport gates on Thursday, in addition to reports of gunfire. Local outlets have reported extensive casualties, though the exact details of the incident remain unclear at press time. Reuters journalist Steve Holland reported a preliminary death count of 13 people, including women and children.