Congressional staff and members working to help U.S. citizens and others leave Afghanistan have apparently received reports of the situation in the days before and after the military’s exit, according to the Washington Examiner.

An Afghan American citizen who worked with Nebraska Rep. Don Bacon’s office reportedly claimed the Taliban “were creating as much problem as they could,” according to the outlet.

“After the State Department told him to go to the Interior Ministry, he encountered a Taliban guard and explained he was told to go there,” the report alleged:

“He told me, ‘Go and tell the State Department to f*** themselves.’” He eventually got into the Kabul airport after taking a big risk outside the gate during a firefight, in which guards shot at peoples’ feet to disperse the crowd.

“Everybody run away,” he said. It was the day after the ISIS-K bombing at Abbey Gate. “I know it was stupid, but I took just my chance. I ran towards the soldiers. I had my passport in my hand — shouting that I’m an American citizen.” He, his wife, and four small children have since made it to the United States.

During his first address to the nation after pulling out of Afghanistan, President Joe Biden admitted he was leaving ten percent of Americans, who the U.S. intended to evacuate, in the country controlled by the jihadist group. 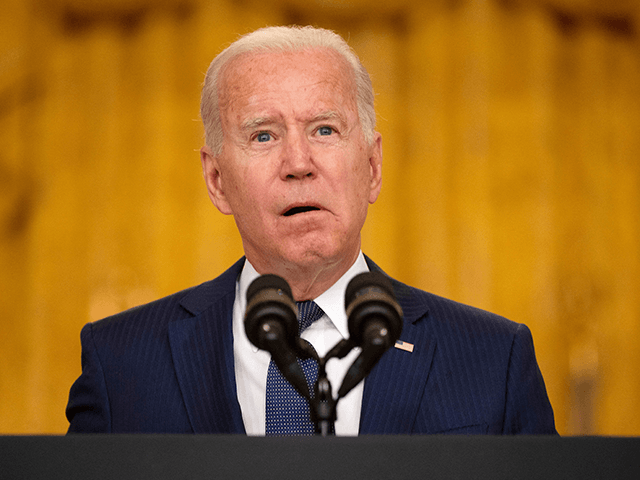 U.S. President Joe Biden delivers remarks on the terror attack at Hamid Karzai International Airport, and the U.S. service members and Afghan victims killed and wounded, in the East Room of the White House, Washington, DC on August 26, 2021. (Photo by JIM WATSON/AFP via Getty Images)

The president during the speech said, “the bottom line” — now that the U.S. evacuations are complete and service members will not be shuttling Americans and high-risk Afghans out of the country — is only “90 percent of Americans in Afghanistan who wanted to leave were able to leave. And for those remaining Americans, there is no deadline. We remain committed to get them out if they want to come out.”

Meanwhile, 29 California students were reportedly stuck in Afghanistan at the hands of Biden’s administration, days after it withdrew the last U.S. troops from the country to meet the Taliban’s deadline.

“We can confirm that we currently have 29 students, from 19 families, in Afghanistan,” Rai said. “We stand ready to support these students and families in whatever way that we can.”