A laboratory at the Nanjing University of Aeronautics and Astronautics exploded on Sunday, killing two and injuring nine. The explosion, Chinese state media noted, was the second of its kind at a research institute this year.

Images surfacing on social media, some of them verified through distribution in Chinese Communist Party outlets, appear to show an ongoing fire before a large blast on a higher floor of a building at the institution’s Jiangjun Road campus. Nanjing University published a message on its Weibo – a Chinese government-controlled social media outlet – page confirming the explosion, death count, and that authorities had completed “rescue” operations, but offered few other details. The identities of the victims remain private at press time.

#explosion in a university laboratory in #Nanjing, capital of east #China's Jiangsu Province, has left two dead and nine others injured. pic.twitter.com/1uESiMMybs

Two people died and nine were injured in a lab explosion at the #Nanjing University of Aeronautics and Astronautics on Sunday afternoon. An investigation into the incident is underway: Nanjing fire control authorities. pic.twitter.com/M38qTnJe2k

China’s Global Times, a government propaganda newspaper, confirmed that the incident occurred on Sunday afternoon at the College of Material Science and Technology, suggesting that undergraduate students may have been involved. It noted that such explosions affecting students at Chinese scientific academic institutes are not uncommon.

“On March 31, a graduate student was killed in a laboratory blast at the Institute of Chemistry of the Chinese Academy of Sciences in Beijing,” the Global Times noted. The Chinese Academy of Sciences is the world’s largest research organization. The newspaper recalled two other incidents of laboratory explosions at other universities in the past decade.

Nanjing University of Aeronautics and Astronautics is at the forefront of China’s space, nuclear, and other physics research. Under President Donald Trump, America blacklisted cooperation by U.S. entities with the university on the grounds that Beijing uses it, and other universities, to bolster its military capabilities. Extensive research by human rights groups and China watchdogs has revealed a tremendous expansion on the part of the Communist Party in recent years into control and use of universities for political and national security purposes. 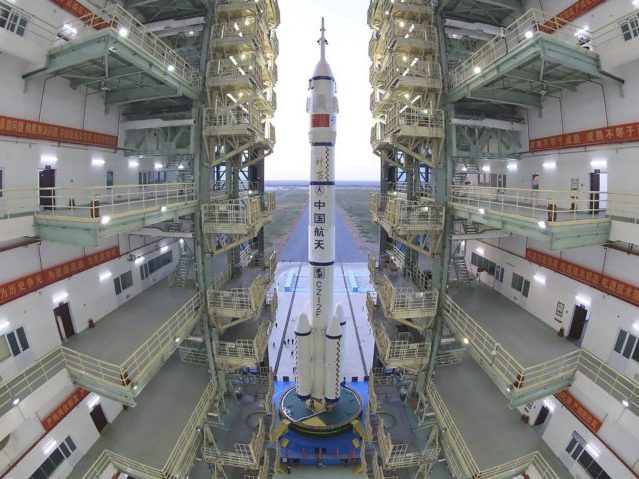 In this photo released by Xinhua News Agency, the Shenzhou-13 manned spaceship prepares to be transferred to the launching area of Jiuquan Satellite Launch Center in northwestern China, October 7, 2021. (Wang Jiangbo/Xinhua via AP)

“Military–civil fusion in China’s university sector has spurred efforts to increase academe’s integration with defence and security,” the Australian Strategic Policy Institute (ASPI) noted in 2019. “In 2017, the Party Secretary of Beijing Institute of Technology, a leading university for defence research, wrote that universities should ‘stand at the front line of military–civil fusion.'”

Chinese laboratory safety became an issue of international speculation in 2020 as the world struggled to contain the ongoing Chinese coronavirus pandemic. The pandemic began in the central Chinese city of Wuhan, home to one of the world’s top virology research facilities. The Wuhan Institute of Virology (WIV) had been studying bat coronaviruses for years, fueling theories that the Chinese coronavirus, which had not infected human beings before late 2019, may have originated there as a result of human engineering.

The U.S. State Department claimed in a fact sheet published last year that it had evidence that “several researchers inside the WIV became sick in autumn 2019, before the first identified case of the outbreak, with symptoms consistent with both COVID-19 [Chinese coronavirus] and common seasonal illnesses.” 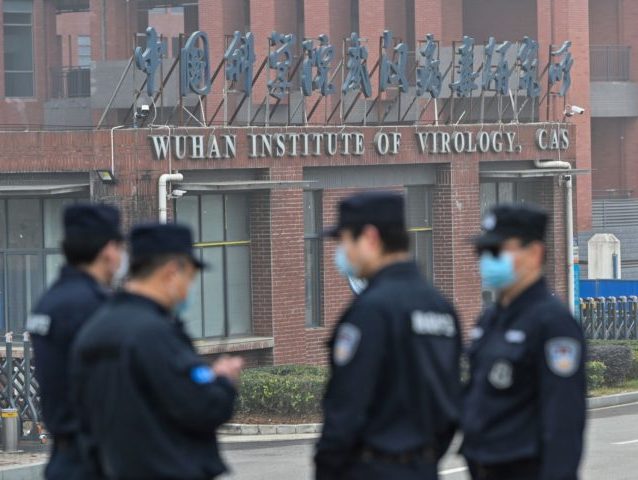 Security personnel stand guard outside the Wuhan Institute of Virology in Wuhan as members of the World Health Organization team investigate the origins of the  coronavirus make a visit to the institute in Wuhan in China’s central Hubei province on February 3, 2021. (HECTOR RETAMAL/AFP via Getty Images)

No concrete evidence has surfaced to conclude the virus did not emerge in nature. A World Health Organization (W.H.O) report published this year asserted that a laboratory leak was highly unlikely to be the cause of the pandemic, instead asserting that the likeliest route of initial transmission was a third-party animal that became infected with the virus by its host. That study did not find a single animal testing positive for Chinese coronavirus in the Wuhan area, however, after processing 80,000 samples.

The Chinese Communist Party vehemently denies that the virus originated in China at all, claiming instead that a laboratory accident at a U.S. Army facility in Maryland caused the pandemic. It has not produced any evidence to support this claim.

Chinese Academy of Sciences (CAS) nominated coronavirus researchers at the WIV for an award recognizing “outstanding science and technology achievement” in June.

In addition to potential threats from scientific institutions, spontaneous explosions have become a semi-regular part of Chinese life as a result of other forms of negligence, including faulty gas pipelines, poor storage of flammable chemicals, and industrial negligence. China Daily, a government newspaper, reported on Monday that the province of Liaoning has launched a campaign to punish negligence gas contractors after two separate deadly explosions in a week. 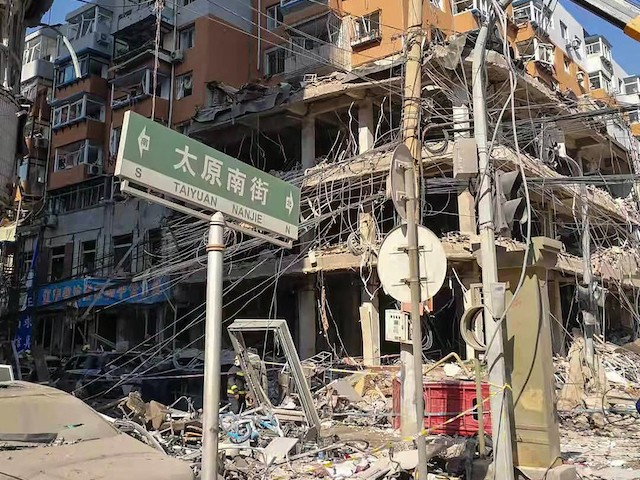 The site of a gas explosion accident at a restaurant is seen after the explosion ripped through a busy street killing at least three and injuring dozens, in Shenyang, China’s northeastern Liaoning province on October 21, 2021. (STR/AFP via Getty Images)

“On Sunday morning, two people were killed and seven others were injured in a gas blast in a residential building in Dalian’s Wafangdian county,” China Daily noted. “On Thursday morning, an explosion rocked a restaurant in Shenyang, the provincial capital. Four people were initially reported to have died and 47 were injured. The death toll then rose to five a day later.”

A 2015 incident in Tianjin, northern China, killed 173 people. On that occasion, investigators concluded that a chemical company, Ruihai Logistics, had improperly stored significant amounts of sodium cyanide, leading to an explosion equivalent to the detonation of 21 tons of TNT. The Chinese Communist Party imprisoned 49 people after evidence surfaced that Ruihai had bribed local Party members to avoid being fined for unsafe chemical storage prior to the accident.