Shanghai Disneyland shut down on short notice Sunday and refused to allow any of the theme park’s 34,000 visitors to leave the facility until they were tested for the Chinese coronavirus, after allegedly detecting just one new case of the disease in a woman who visited the site one day earlier, the Wall Street Journal (WSJ) reported Monday.

“Mass testing a theme park quickly proved a surreal scene: As customers waited to be tested inside Shanghai Disneyland, parks employees tried to keep them entertained,” according to WSJ.

No visitors are allowed to enter Shanghai #Disneyland since it was closed on Monday for coronavirus prevention. Security guards at the entrance were seen checking working staff' health information, and no tourists were seen in the resort Monday. pic.twitter.com/02lYqKA08I

“The fireworks display continued as planned so guests would have something to watch while they waited,” a Shanghai Disneyland spokesman told the newspaper, adding that “park workers helped manage crowd flow to avoid everyone trying to leave at once.”

“Power chargers were handed out so guests could charge their phones, and families with younger children were allowed to leave first,” WSJ relayed.

“Nearly 34,000 people had been tested by Monday morning,” Agence France-Presse (AFP) quoted the Shanghai city government as saying in a statement issued November 1. The press release indicated many of Shanghai Disneyland’s Sunday visitors may have been forced to quarantine at the amusement park overnight.

Despite the municipal government’s admission that no one who visited Shanghai Disneyland on October 31 tested positive for the Chinese coronavirus, it still ordered all affected persons to “stay away from work or school for at least two days and undergo further testing,” according to AFP.

“All tourists who had visited Disneyland and Disneytown during the weekend were required to report to their neighborhood, employer, or school, and conduct a nucleic acid test immediately at a nearby medical institution,” Shanghai’s epidemic prevention and control headquarters said on October 31, according to Xinhua, China’s official state-run press agency.

Shanghai Disneyland officials announced in a statement released late Sunday they would shut down the theme park for at least the next 48 hours.

“Shanghai Disneyland and Disneytown will be temporarily closed from Monday [November 1] to Tuesday [November 2] for the purpose of epidemic prevention and control,” the facility announced on the evening of October 31. 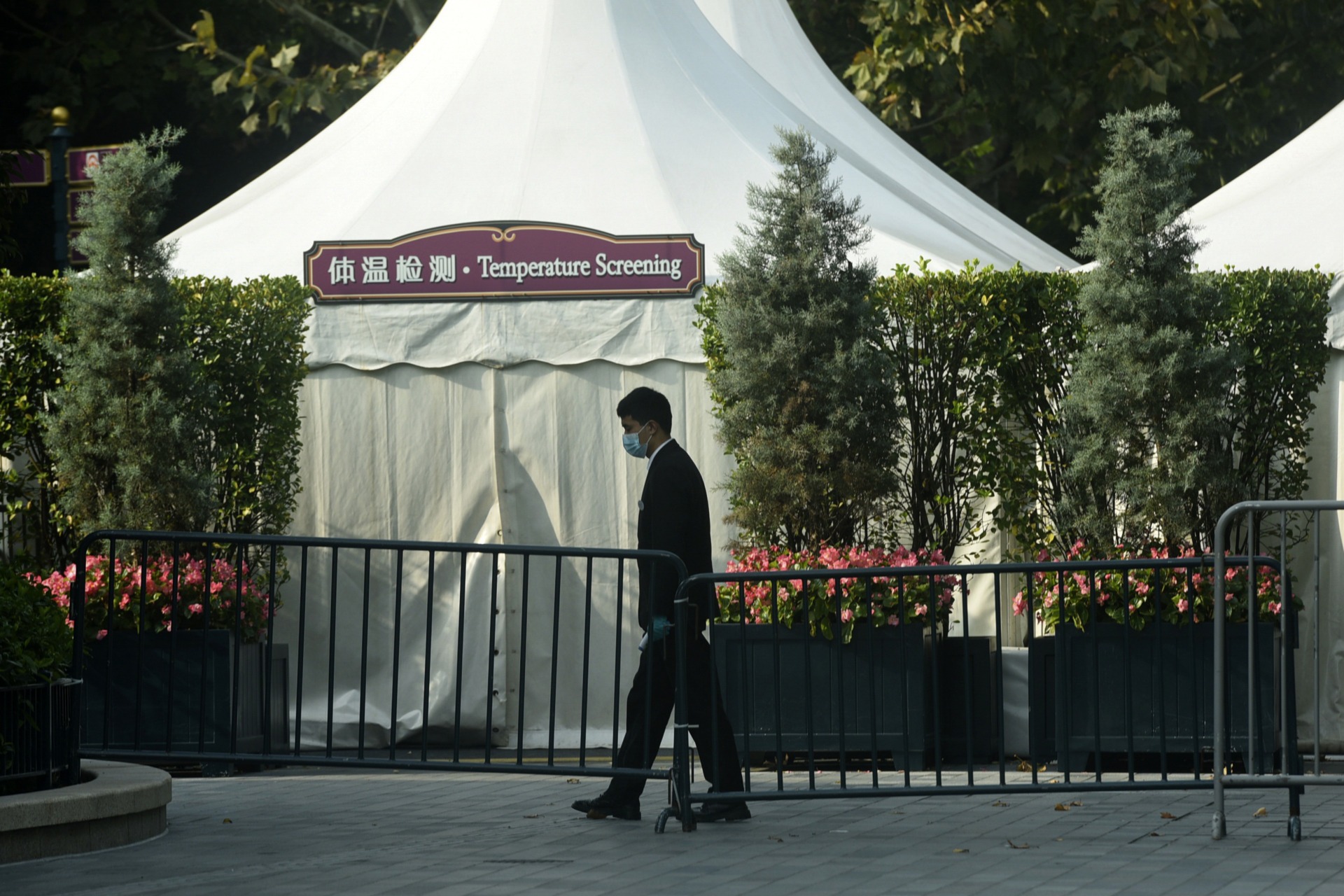 A worker wearing a face mask to help protect from the coronavirus walks by a closed temperature screening booth set up at the entrance gate to the Shanghai Disney Resort in Shanghai, China, Monday, Nov. 1, 2021. The theme park locked down late Sunday after learning a recent visitor had tested positive in another province. The park is shut for Monday and Tuesday as they continue to cooperate with the pandemic prevention efforts, Shanghai Disneyland said in a notice on Monday. (Chinatopix via AP)

“The reopening of the facility will be announced once it is decided,” the notice added, indicating the theme park’s closure may extend beyond November 2.

Shanghai Disneyland’s coronavirus panic comes as China battles a national resurgence of its coronavirus caseload, which first emerged on October 17.

“The current epidemic is still in a rapidly developing phase and remains complicated,” Mi added.

The Chinese Communist Party (CCP) has blamed the country’s latest coronavirus epidemic on a tour group that traveled from Shanghai to China’s Inner Mongolia Autonomous Region in early-to-mid October. CCP officials say members of the group contracted the Chinese coronavirus from a foreign source, likely from Mongolia, during their travels and then spread the disease when dispersing to their home cities nationwide. They have provided no evidence that the origin case of the current outbreak occurred as a result of contact abroad.

An estimated 6 million people are currently under lockdown orders across China — mostly in the country’s northern regions, such as the Russian border province of Heilongjiang — as CCP officials scramble to contain the virus’s spread.