The Chinese government propaganda outlet Global Times quoted regime-approved “experts” on Wednesday dismissing President Joe Biden as incapable of clear speech, suggesting that his comments in apparent support of a sovereign Taiwan were simply the product of his woeful communication skills.

Biden had used the word “independent” in a convoluted statement on America’s policy on Taiwan – an intentionally messy policy known as “strategic ambiguity” – in the aftermath of a conversation on Monday with Chinese dictator Xi Jinping. Some Chinese observers decried Biden’s comments as not acknowledging Beijing’s false assertion that Taiwan is a Chinese province, but Biden rapidly walked back his remark and insisted “nothing” would change in America’s approach to the island nation.

Taiwan has been a sovereign state for decades, and the island has never been ruled by any government in Beijing. The Taiwanese government is democratic, anti-communist, and eager to establish ties with the United States. Since the presidency of Jimmy Carter, however, Washington has refused to acknowledge the reality of Taiwan’s existence, as doing so would automatically sever all diplomatic ties to the Chinese Communist Party.

Chinese media outlets asserted shortly before the three-hour “virtual meeting” between Biden and Xi that “suppressing” Taiwan was high on Xi’s list of priorities for the event.

“There is no need to analyze Biden’s meaning word for word,” Lü Xiang, a regime-approved Chinese “expert,” told the Global Times on Wednesday.

“It is known that Biden is not articulate. Since taking office, he has uttered all sorts of strange words and expressions,” Lü observed. “Another confusing and unclear statement is not surprising.”

Another communist-approved “expert” told the propaganda newspaper China should celebrate that Biden “did not even try to speak from the position of strength” when he met with Xi. Yet other Chinese observers celebrated that China had “the edge” in talks due to a variety of factors, including the deception that China, the origin country of the Chinese coronavirus pandemic, has competently dealt with the matter. (In reality, China is currently suffering what may be one of the world’s biggest outbreaks.) 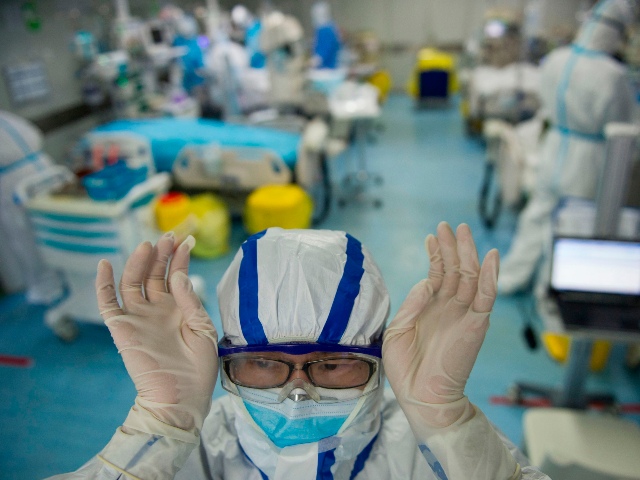 This photo taken on February 22, 2020, shows a nurse adjusting his goggles in an intensive care unit treating COVID-19 coronavirus patients at a hospital in Wuhan, in China’s central Hubei province (STR/AFP via Getty Images).

Biden’s meeting with Xi went on for three and a half hours, according to both the American and Chinese sides, and allegedly addressed a wide variety of issues. Taiwan featured prominently in government reports on the discussion. The Chinese Communist Party’s Xinhua News Agency quoted Xi as having threatened Biden on the matter, warning, “Whoever plays with fire will get burnt.”

China violated Taiwan’s airspace Monday during a similar timeframe as the Xi-Biden call.

Biden remarked on the Taiwan issue during an event in New Hampshire shortly thereafter, appearing to defy Xi’s threat, but rapidly backed down.

“We have made very clear we support the Taiwan Act, and that’s it,” Biden said to reporters. “It’s independent. It makes its own decisions.”

Following coverage of the comments, Biden insisted he was “not encouraging independence” and “nothing happens” to American policy on Taiwan following his statement.

“I want to stress that what the US should abide by is the one-China principle and the three China-US Joint Communiqués, which are important political consensus between China and the US and the political foundation of China-US ties,” Zhao told reporters during a Foreign Ministry briefing. “Both the so-called ‘Taiwan Relations Act’ and the ‘Six Assurances,’ concocted by some forces in the US, contravene the three China-US Joint Communiqués. In essence, they place US domestic law above international obligations and are illegal and invalid.”

The Taiwan Relations Act, passed to diminish the catastrophic consequences of President Jimmy Carter withdrawing recognition of Taiwan as a state, does not identify Taiwan as a state actor but does allow American companies to sell military equipment to the country, protecting it from a Chinese invasion.

Biden has repeatedly made baffling statements regarding Taiwan policy since becoming president this year. In August, the president told ABC News that the United States had a “sacred commitment” to protect both NATO countries and Taiwan, placing the island on part with a military coalition America is treaty-bound to defend. NATO’s Article 5 requires members to treat an attack on one member country as an attack on all member countries; no such document exists regarding Taiwan.

Biden repeated his claim during a CNN town hall event in October that America has made a “commitment” to military intervention in defense of Taiwan.

The White House has repeatedly corrected Biden following these statements.

“The U.S. defense relationship with Taiwan is guided by the Taiwan Relations Act,” an anonymous White House spokesperson said following the CNN remarks. “We will uphold our commitment under the act, we will continue to support Taiwan’s self-defense, and we will continue to oppose any unilateral changes to the status quo.”