President Joe Biden on Thursday night promised the U.S. stands behind Taiwan’s defense and had a commitment to militarily support the island China claims for itself. The White House was forced to hastily issue a different, contradictory statement before the evening was out.

“Yes, we have a commitment to do that,” Biden told a hand-picked CNN town hall audience when asked if the U.S. would come to the defense of Taiwan, which has complained of mounting military and political pressure from Beijing to accept Chinese sovereignty.

The president made a similar pledge in August during an ABC interview, insisting the U.S. would always defend key allies, including Taiwan, despite the hasty withdrawal from Afghanistan.

Biden said then the U.S. made a “sacred commitment” to defend NATO allies in Canada and Europe and it was the “same with Japan, same with South Korea, same with Taiwan.”

The Guardian reports the White House subsequently told reporters later Thursday evening U.S. policy on Taiwan was nothing like that described by the president.

A White House spokesperson said Biden was not announcing any change in U.S. foreign or military policy.

“The U.S. defence relationship with Taiwan is guided by the Taiwan Relations Act. We will uphold our commitment under the act, we will continue to support Taiwan’s self-defence, and we will continue to oppose any unilateral changes to the status quo,” the spokesperson said. 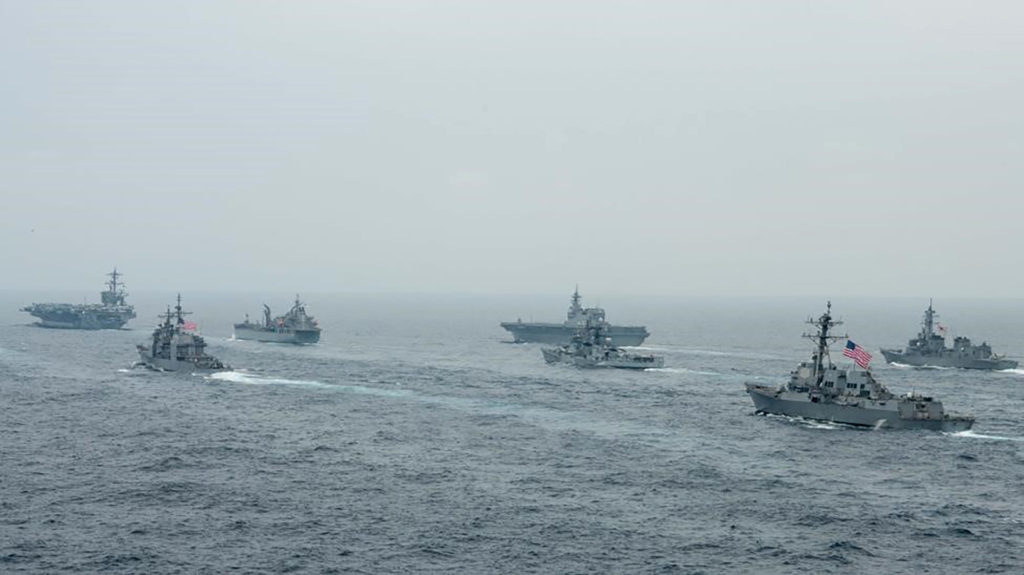 U.S. Navy aircraft carrier USS Carl Vinson (CVN 70) and other U.S. and Allied vessels transit the Bay of Bengal as part of MALABAR 2021, on Oct. 12, 2021. China seeks to bring the strategically and symbolically important island back under its control, and the U.S. sees Taiwan in the context of broader challenges from China. (Russel Lindsey/US Navy via AP)

The “Taiwan agreement” is an unofficial name for a long-standing policy dictating Beijing and Washington’s relationship with Taipei.

Under the agreement, the U.S. officially recognizes China rather than Taiwan for diplomatic purposes. The agreement is supported by the Taiwan Relations Act which was passed by the U.S. Congress in 1979.

The legislation “makes clear that the U.S. decision to establish diplomatic ties with Beijing instead of Taiwan rests upon the expectation that the future of Taiwan will be determined by peaceful means,” Reuters news agency outlined earlier this month, as Breitbart News reported.

Senate Foreign Relations Committee Chairman Robert Menendez (D-NJ) stated that China is abusing Taiwan, and that if this continues, “there’s going to be a miscalculation, and that would be dangerous for the entire region.” https://t.co/YXgFsVjZax

“While that act binds the United States to provide Taiwan with the means to defend itself, Washington only acknowledges China’s stance that the island belongs to it and that there is ‘one China,’ and takes no position on Taiwan’s sovereignty,” the news agency noted.

The Chinese Communist Party (CCP) established the “one-China” policy so that foreign governments could officially recognize Beijing’s stance that only one legitimate Chinese government exists.

The policy stipulates the CCP is the sole ruler of China’s government and must never be challenged on that specific edict.