The Communist Party of China calls the recognition of the reality that Taiwan is a free, democratic state “secession,” despite never in its history having control of the island. Taiwan functions as a fully independent, sovereign country, but Beijing insists it is a rogue “province” and browbeats other countries, including the United States, into failing to respect its status.

Xi and Biden scheduled a video meeting for Tuesday morning Beijing time, or Monday morning Washington time. The White House has not made clear the objective of the discussion.

The Global Times emphasized the importance of pressuring Biden into distancing the United States from Taiwan, a friendly nation. The Communist Party has exhibited increasing distress around the issue of Taiwan after Biden, on multiple occasions, claimed that Washington has a “commitment” to intervene militarily in the event that the Communist Party attacks Taiwan, going as far as to compare America’s ties to Taiwan with those to NATO countries. Unlike Taiwan, America is treaty-bound to respond to any attack on a NATO country as if it were an attack on the U.S. homeland.

The United States does not formally recognize Taiwan’s sovereignty, as doing so would automatically cut all ties to Beijing under the latter’s “One China” policy.

In an editorial titled, “Suppressing ‘Taiwan Secession’ Together Key for China, U.S. to Manage Competition,” the Global Times declared Taiwan to be a top issue for Xi.

“The U.S. should play a constructive role in changing the extreme path of the DPP authority,” the article demanded, referring to Taiwan’s ruling Democratic Progressive Party (DPP). “In order to reduce the risk of a strategic collision between China and the U.S., the latter must take a step back from the Taiwan question and show its restraint. It also needs to see that it is the only one that should take a step back to keep the forces between China and the U.S. at a safe distance.”

The Global Times referred to Taiwan as “the most critical and urgent” issue between the two countries and “the most likely flashpoint to trigger the confrontation between China and the U.S.” It asserted that the Xi regime has lost hope that dialogue will result in the United States agreeing with its false assertion that Taiwan is a Chinese province, leading it to consider a military invasion a viable strategy.

“We increasingly feel that trying to figure out Washington’s logic is a waste of time, and that force seems to work better than reasoning with the U.S. side,” the propaganda newspaper declared. “Yes, the Chinese mainland [communist China] has been stepping up its preparations for a military conflict across the Taiwan Straits in recent years. Apart from making the Taiwan authorities aware that the risk of war is approaching them, is there any language in the world that can help them understand what they are doing is extremely dangerous?”

Elsewhere in its reporting, the Global Times relayed that a conversation between Foreign Minister Wang Yi and American counterpart Antony Blinken on Saturday, intended to prepare for the Biden-Xi meeting, prioritized the Chinese viewpoint on Taiwan.

“‘Taiwan independence’ is the biggest threat to peace and stability in the Taiwan Straits and any connivance and support for separatists forces is a breach of peace in the Straits and it will eventually bear the consequences of its own actions,” the outlet asserted, paraphrasing Wang. 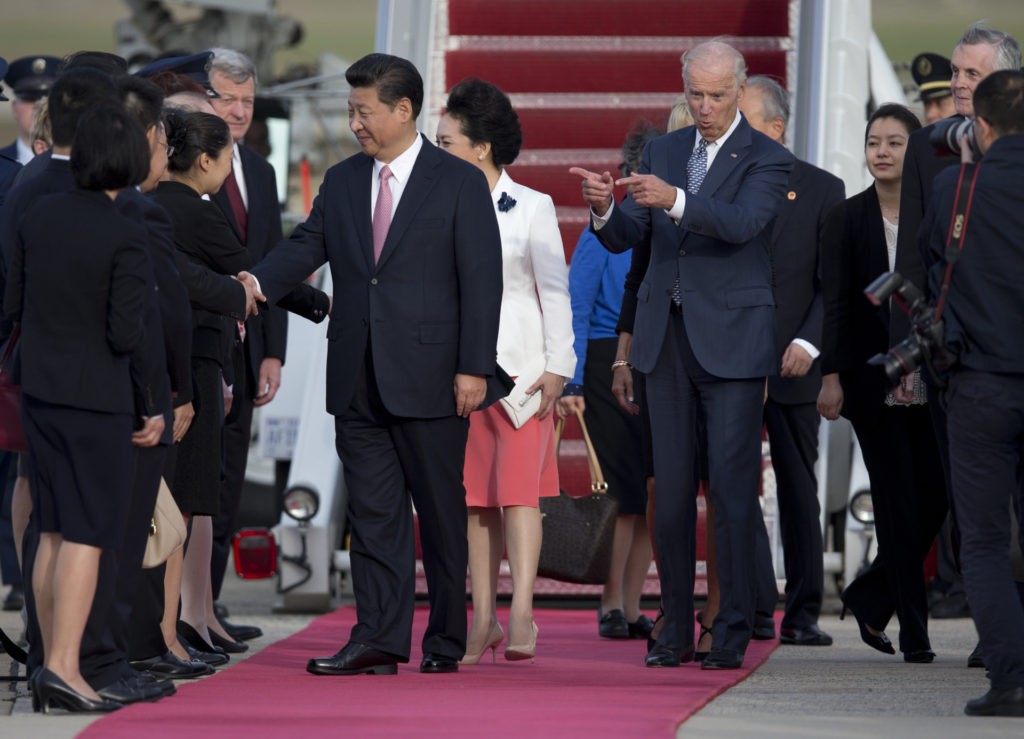 The first Global Times editorial on the matter dismissed Blinken’s statements in the discussion as “hypocritical cliché and nonsense,” indicating no interest on China’s part in having any meaningful conversation about Taiwan. Chinese diplomats regularly scold and disrespect Blinken with little pushback.

“Considering the Biden administration has not taken any concrete action to correct its wrong words and actions on the Taiwan question, China will continue exerting pressure on the U.S. government,” one pro-regime “expert” mused.

Another expert noted that Biden’s approach to China was stuck between “two elite groups” in the United States: pro-freedom advocates that support China and “Wall Street elites” who profit tremendously from business with China.

The Global Times concluded that the meeting between Xi and Biden was “unlikely” to result in any agreement, leaving its purpose unclear.

Biden has spent much of his first year in office sending contradictory messages on China. Biden has repeatedly made the bizarre claim that he has traveled with Xi Jinping more than any other world leader and referred to the alleged friendship between the two during irrelevant events. At the same time, Biden has stated on multiple occasions that he believes the United States has committed to attacking China if it invades Taiwan.

John Kerry’s diplomatic efforts with China on climate change came up empty over the summer, prompting him to call for “direct diplomacy” between Joe Biden and Chinese communist party leader Xi Jinping. https://t.co/Vy55WgdPyW

“Yes, we have a commitment to do that,” Biden said in October when asked by CNN’s Anderson Cooper if America would offer military backing to Taiwan in the event of an invasion.

“We have a wide range of cooperation with the US aiming at increasing our defense capability,” she told CNN.