Serena Williams, considered by many the greatest female tennis player of all time, joined a growing chorus of some of the tennis world’s most prominent players on Thursday demanding an investigation into the disappearance of Wimbledon and French Open doubles champion Peng Shuai.

Peng disappeared in China in early November after publishing a post on Weibo, the Chinese state-controlled social media outlet, accusing a senior Communist Party official 40 years older than her of rape.

The Communist Party added to the increasingly alarm regarding Peng’s wellbeing this week by publishing an alleged “email” from Peng to the president of the Women’s Tennis Association (WTA) head Steve Simon in which “she” retracted all her accusations, claimed to be resting peacefully at home, and urged the world to forget about her. 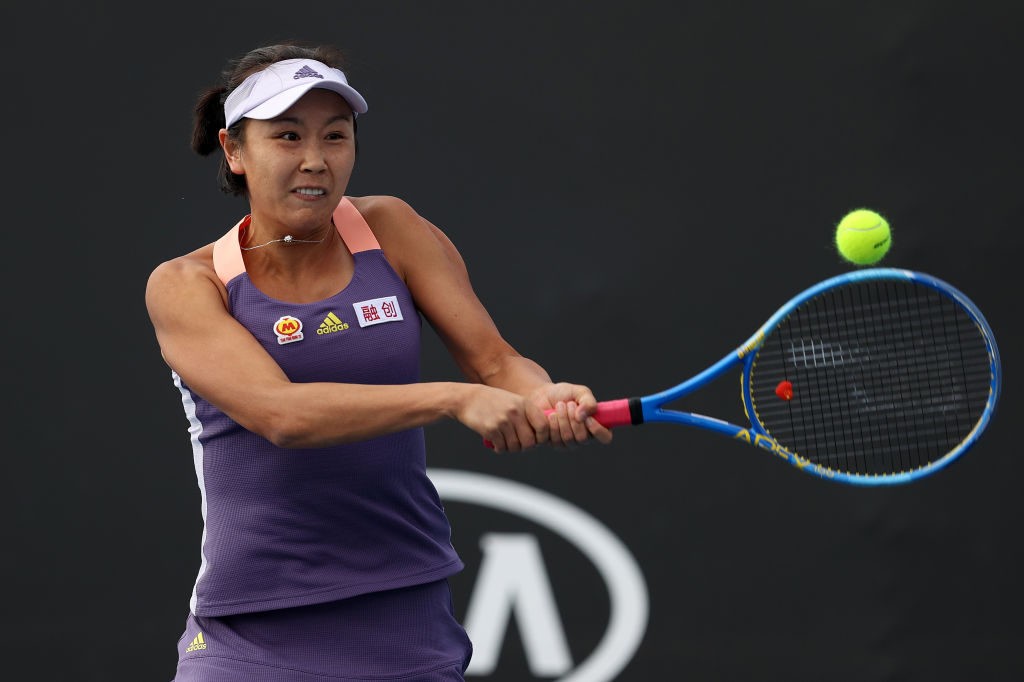 Peng Shuai of China plays a backhand during her Women’s Doubles first round match on day four of the 2020 Australian Open at Melbourne Park on January 23, 2020 in Melbourne, Australia. (Clive Brunskill/Getty Images)

The “email,” observers noted, as published by Chinese government broadcaster CGTN featured a visible writing cursor, suggesting CGTN itself either drafted the email or had access to the person who did. The email lacked basic features common to that medium, such as a box showing who sent and received the email.

Simon has confirmed since that he did receive the text, but that all attempts to independently contact Peng or any of her family or friends in China have failed.

“I am devastated and shocked to hear about the news of my peer, Peng Shuai,” Williams, a 13-time Grand Slam champion, wrote on Thursday in a social media post using the hashtag #whereispengshuai. “This must be investigated and we must not stay silent. Sending love to her and her family during this incredibly difficult time.”

I am devastated and shocked to hear about the news of my peer, Peng Shuai. I hope she is safe and found as soon as possible. This must be investigated and we must not stay silent. Sending love to her and her family during this incredibly difficult time. #whereispengshuai pic.twitter.com/GZG3zLTSC6

Williams’ post follows similar statements from other major tennis stars this week. Japanese champion Naomi Osaka, who has made a name for herself as an advocate for mental health issues, published a post on Tuesday asserting, “censorship is never ok at any cost.”

“I hope Peng Shuai and her family are safe and ok,” Osaka wrote. “I’m in shock of the current situation and I’m sending love and light her way.”

At least one top tennis player, Alizé Cornet, has expressed support for cutting the tennis world’s business ties to China.

“If we have to detach ourselves from China because it no longer adheres to our values, we have to do it even if we are losing a little economically,” Cornet said this week. “There are enormous sums at stake but we cannot remain silent in the face of humanity for the [sake of] the wallet.”

Many stars are using an image of Peng with the #whereispengshuai hashtag created by the manager of a fan account for tennis player Donna Vekic.

Please guys. I created some icon for Twitter, with the #WhereIsPengShuai and also a Banner.

Legendary champions Billie Jean King and Chris Evert have also denounced the disappearance of the Chinese tennis star and applauded the WTA for threatening to pull its entire business – estimated to be worth at least $1 billion – from China.

Yes, these accusations are very disturbing. I’ve known Peng since she was 14; we should all be concerned; this is serious; where is she? Is she safe? Any information would be appreciated.🙏 https://t.co/RH0aYCDqQm

Men’s tennis has also begun weighing in, sharing the #whereispengshuai image and demanding China allow her to speak freely.

We want to know.

We need to know. #WhereIsPengShuai pic.twitter.com/TSlUL4Xst7

The number of tennis players sharing the #WhereIsPengShuai hashtag is growing quickly today, including from the ATP side.

Heartening to see so many in tennis willing to put concern for Peng Shuai’s well being over cynical business interests. A model for other sports re: China. pic.twitter.com/Z3zVACBZyC

Scottish tennis champion Andy Murray weighed in by sharing a speech by Czech tennis player Barbora Krejcikova on the anniversary of the Velvet Revolution, in which the Czech Republic and Slovakia, one country at the time, peacefully ended a communist regime through nationwide protests.

Female tennis player Peng Shuai whereabouts currently unknown after making Sexual abuse allegations against Chinese government official.
This speech gives us a reminder and some hope that things can change in the future 🙏 #WhereIsPengShuai https://t.co/eKnLCHcPLj

French tennis player Nicolas Mahut has repeatedly expressed support for Peng and expanded his remarks on Thursday to note that China will soon host the 2022 Beijing Winter Olympics, questioning allowing a country shamelessly disappearing top athletes to host the most prestigious sports event in the world.

Enough said 👏👏👏
« The voices of women need to be heard and respected, not censored nor dictated to. »
Keep fighting Steve Simon…Thomas Bach, do you not feel involved? @iocmedia @Beijing2022 #whereispengshuai https://t.co/d2mPdS1gIL

The top men’s tennis player in the world, Novak Djokovic, weighed in on Monday, expressing – like many in the community – “shock” at Peng’s disappearance.

Novak #Djokovic: "When I heard the story of Peng Shuai I was shocked. I hope she is well and that we can find her as soon as possible"#NittoATPFinals #WhereIsPengShuai pic.twitter.com/XkWmQFpzEF

Notably absent from the conversation is Roger Federer, often identified as the greatest tennis player in the history of the sport and a still-active player. Forbes ranked Federer number seven on its list of highest-paid athletes in the world for 2021, a position maintained largely through sponsorship deals with multinational companies that do significant business with the Chinese communist regime. At the height of his success, Federer signed a “strategic” deal with Mercedes-Benz focused on China; he is one of the most popular athletes in the country.

WTA chief Steve Simon repeated in an interview with CNN on Thursday that he did not believe the email the communist regime attributed to Peng came from her and that he is prepared to withdraw the WTA’s business from China – which includes an ongoing ten-year deal to host the WTA finals through 2028 – if the regime does not act appropriately regarding Peng’s human rights.

“There’s too many times in our world today where we get into issues like this that we let business, politics, money, dictate what’s right and what wrong,” Simon said. “We have a young person who has the fortitude to step up and make these allegations knowing full well what the results of that could be … we’re definitely willing to pull our business and deal with all the complications that come with it.”

Simon noted that a reply to the mysterious state media email did not result in any communication with Peng, nor had any attempt to email her personal accounts, call her phone numbers, or contact any friends or family in the country.

Simon’s inability to communicate with Peng, as well as everyone else’s, calls into doubt claims in the CGTN email that “Peng” demanded the world verify any news about her life with her personally.

“If the WTA publishes any more news about me, please verify it with me, and release it with my consent,” the email read, not offering any way to do so.

“Peng” also declared in the text, “The news in that release, including the allegation of sexual assault, is not true. I’m not missing, nor am I unsafe. I’ve just been resting at home and everything is fine. Thank you again for caring about me.”

The Chinese Foreign Ministry refused to offer any information on Peng during its regular press briefing on Friday.

“I’m not aware of the situation,” ministry spokesman Zhao Lijian told reporters, adding that Peng’s disappearance was “not a diplomatic question.”

British newspaper The Guardian noted on Friday that China had clearly hampered citizens’ ability to find news about Peng – or the growing outcry from the tennis community – disappearing her from social media as well as real life.