China warned the world Thursday any nations that sought to boycott the 2022 Beijing Winter Olympics would “pay the price” for such intransigence.

Washington announced its boycott earlier in the week, saying it was not be sending any diplomats to the event prompted by widespread rights abuses by China and the well documented genocide against the Muslim Uyghur minority in Xinjiang.

Nonetheless an infuriated Beijing was quick to warn of its response after laughing off the measures started by U.S. President Joe Biden.

“The U.S., Australia, Britain and Canada’s use of the Olympic platform for political manipulation is unpopular and self-isolating, and they will inevitably pay the price for their wrongdoing,” foreign ministry spokesman Wang Wenbin told reporters, according to AFP.

Prime Minister Boris Johnson announced Britain’s boycott in parliament on Wednesday but joined the other three nations in saying athletes should still attend.

“I do not think that sporting boycotts are sensible — that remains the policy of the government,” he added. 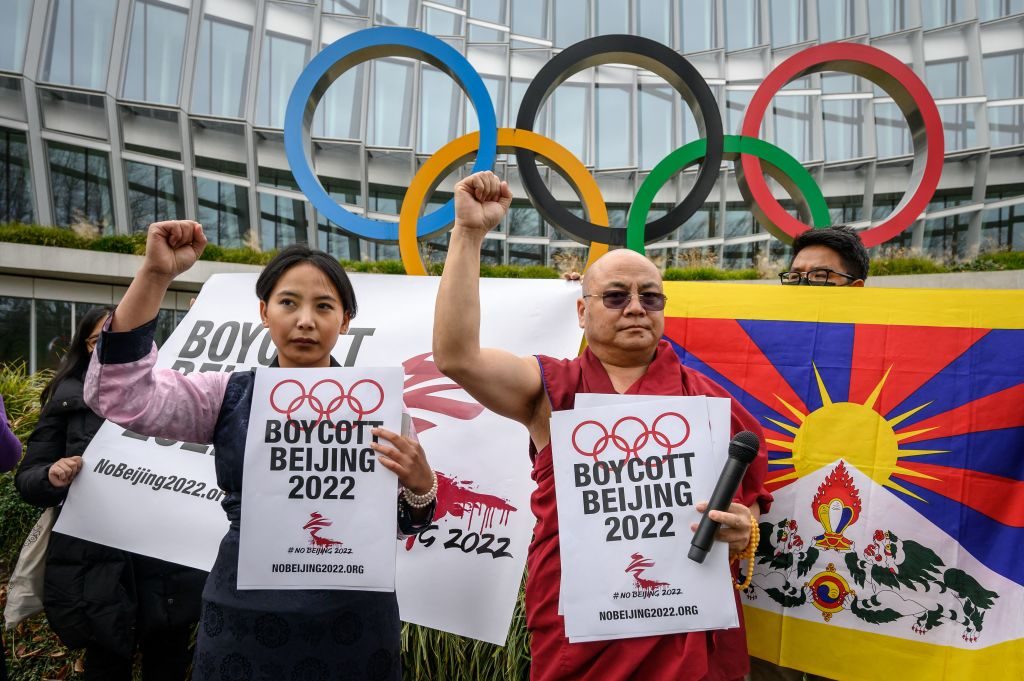 Tibetan activists stand in front of the International Olympic Committee (IOC) headquarters during a protest ahead of the February’s Beijing 2022 Winter Olympics, on November 26, 2021 in Lausanne. (FABRICE COFFRINI/AFP via Getty Images)

In Ottawa, Prime Minister Justin Trudeau announced Canadian officials too would skip the Games, saying his government is “extremely concerned by the repeated human rights violations by the Chinese government”.

Australia’s leader Scott Morrison made a similar announcement earlier in the day.

Other countries are weighing their own moves.

France, which is set to take over the European Council presidency on January 1, said Tuesday it would seek a coordinated E.U. response to the U.S. decision.

The Kremlin, however, criticised the U.S. move, saying the 2022 games should be “free of politics”.

Campaigners have long said at least one million Uyghurs and other Turkic-speaking, mostly Muslim minorities have been forced into concentration camps in China’s northwestern region of Xinjiang.

After initially denying the existence of the Xinjiang camps, China later defended them as family training centres aimed at reducing the appeal of Islamic extremism.

In a new report published Wednesday, the Uyghur Human Rights Project — a U.S.-based advocacy group –- said it had identified more than 300 Uyghur and other Muslim intellectuals believed to be detained in Xinjiang since 2017.

The Beijing Winter Olympics are scheduled to run from Feb. 4-20. No foreign spectators will be allowed to attend due to COVID-19.