China’s state-run Global Times on Wednesday declared the Biden administration has “failed in the first year in office” in the battle against the Wuhan coronavirus, especially the recent omicron variant outbreak.

“You know there’s 330 million Americans right?!?!? Your number of tests seems awfully insufficient. Why wasn’t this sorted MONTHS ago?” a Chinese social media user shrieked at Biden, as quoted approvingly by the Global Times.

The point of the Global Times critique was to frighten the United States back into lockdowns, with subsequent complaints about America’s “dangerous” determination to hold family Christmas celebrations:

Yang Zhanqiu, a deputy director of the pathogen biology department at Wuhan University, told the Global Times that rapid tests can only detect patients. How to quarantine and treat patients, and how to prevent wide transmission, require comprehensive measures, such as the social measure of staying at home, rather than what Biden said regarding Christmas celebrations.

Lü Xiang, an expert of US studies with the Chinese Academy of Social Sciences, told the Global Times on Wednesday that Biden’s plans had no new measures and are just some comforting words.

Controlling an infectious disease requires strict measures in society, but even the president cannot follow the simple step of wearing a mask at public venues, Lü said.

The Global Times mixed in a grab bag of other unhappy facts about Biden’s first year, including his plummeting approval ratings and soaring U.S. inflation rates, to predict he is “likely to conclude his first year in office as the first U.S. president who so failed in the first year.” 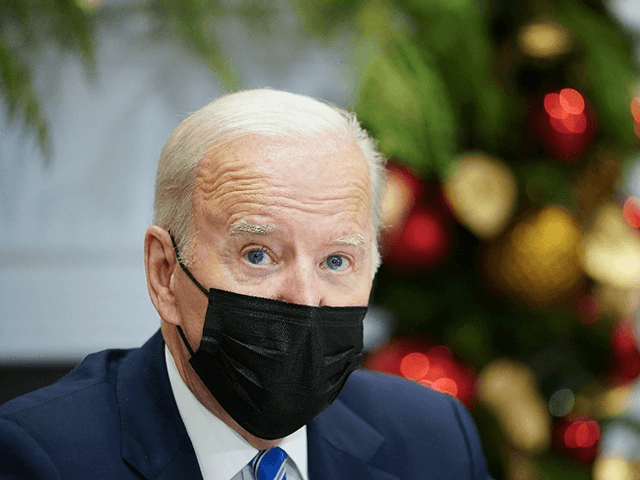 US President Joe Biden speaks during a meeting with the White House COVID-19 Response Team in the Roosevelt Room of the White House in Washington, DC on December 16, 2021. (Photo by MANDEL NGAN / AFP)

China currently has about 13 million people under lockdown in the city of Xi’an to control a coronavirus surge, which is rather dramatic given the Chinese Communist Party claims to have almost completely eradicated the Chinese coronavirus over a year ago.

Supposedly, these immense lockdowns were triggered by a very small number of cases, including just seven omicron infections across the entire country. The Washington Post noted on Thursday that China locked down Dongxing, a city on the Vietnam border with a population of 200,000, because allegedly a single coronavirus infection was reported.

The Chinese Communist Party claims its ability to impose these draconian lockdowns on short notice demonstrates the superiority of its authoritarian system to messy, disobedient Western democracies.

However, the Wall Street Journal (WSJ) posited China’s “zero Covid” lockdown-heavy approach is doing more damage to its economy than the regime wants to admit, as a growing number of factories report delayed shipments, reduced production, and complete shutdowns. Some Chinese border and port cities have reported significant economic contractions as a result.