The Chinese Foreign Ministry confirmed on Monday that an unconfirmed number of American officials have requested Chinese visas to travel to the 2022 Beijing Winter Olympics despite President Joe Biden announcing a “diplomatic boycott” of the event this month.

A “diplomatic boycott” is not a boycott, as politicians do not play in Olympic sports or participate in the event in any meaningful way. The White House nonetheless attempted to garner praise in early December by announcing that Biden administration officials would not attend the event in protest of the Chinese Communist Party’s long list of human rights abuses against its people, including top athletes. Human rights activists have primarily cited the ongoing genocide of the Uyghur people of East Turkistan – fueled by the imprisonment of millions of people in concentration camps where they are subject to extreme torture, gang rape, and forced sterilization – as a reason to relocate, cancel, or boycott the Beijing Olympics.

No country has agreed to boycott the Olympics, including countries facing imminent Chinese invasion, like Taiwan. The White House announcement of an alleged “diplomatic boycott” set off a wave of similar actions, however, from the United Kingdom, Australia, and Japan. Other countries, like New Zealand, announced they would not send politicians to the Games not as a political statement, but out of fear of exposing the officials to China’s currently out-of-control domestic Chinese coronavirus outbreak. New Zealand is nonetheless exposing its athletes to the danger, elevating China by accepting its status as Olympic host country. 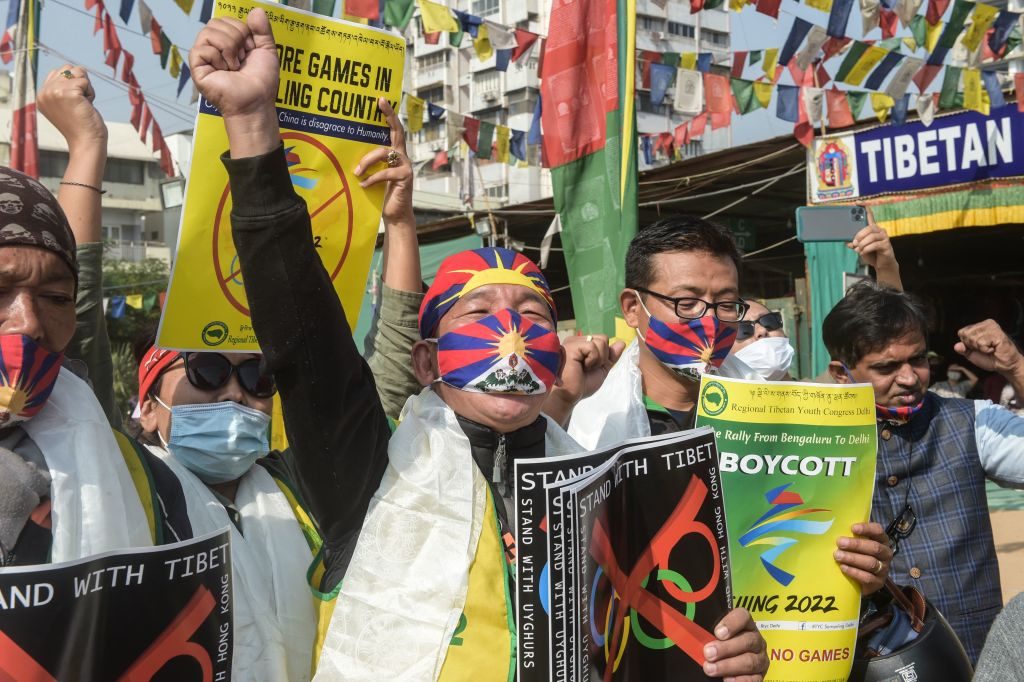 Bikers shout slogan during a bike rally from Bengaluru to Delhi organised by the Regional Tibetan Youth Congress calling for a boycott of the Beijing 2022 Winter Olympics and to support the Tibetan cause, in Ahmedabad on December 26, 2021. (SAM PANTHAKY/AFP via Getty Images)

“The Chinese side has received the visa applications from relevant US personnel,” Zhao told rpeorters. “Earlier, the US side, driven by political manipulation, directed and staged a farce of not sending a diplomatic or official delegation to the Beijing Winter Olympics even though no invitation had been extended.”

“Now with regard to the US request to send a team of government officials to China and their visa applications, the Chinese side will handle them in accordance with international customary practice, relevant regulations and the principle of reciprocity,” Zhao added. “Once again we urge the US to follow the Olympic spirit in practice, refrain from politicizing sports and stop erroneous words and acts that disrupt or undermine the Beijing Winter Olympics.”

Zhao did not offer any details on who the officials were or how many had applied for visas. The reporter asking about the matter, from the Chinese propaganda outlet “Phoenix TV,” claimed to have information that 18 American officials had already applied for visas and another 40 would soon do so. Zhao neither confirmed nor denied the numbers.

The Global Times, another Chinese government media operation, repeated those numbers without elaborating on who the people applying for visas may be.

No evidence indicates that the officials in question are from the White House or the Biden administration; potential candidates could be local city or state officials that the Biden administration has no power over regarding their international travel. Los Angeles, California, won its bid to host the 2028 Summer Olympics, and future host cities often participate in Olympic events to promote their own future Games, so it is possible that local Los Angeles officials are among those violating the spirit of the Biden “diplomatic boycott.”

The White House insisted in early December that it would not send an official American delegation to the Beijing Olympics.

“Not sending a U.S. delegation sends a clear message that we cannot conduct ourselves with business as usual,” White House Press Secretary Jen Psaki told reporters, insisting that American athletes “who have been training, giving up a lot of blood, sweat, and tears preparing for these Olympics should be able to go and compete.”

The position that the privilege of athletes to play games overrides the basic human rights of the victims of Chinese genocide is popular among American elite politicians. Speaking with Breitbart News this month, former President Donald Trump agreed with Biden’s assessment, stating, “I think it’s unfair to the athletes, and I think it’s unfair in many ways to a lot of other countries.”

The Chinese Foreign Ministry effusively welcomed American athletes to Beijing last week for the Games, declaring Biden’s attempt at a “diplomatic boycott” a failure as American athletes had clearly given the Communist Party their blessing by playing the Games.

The Chinese Communist Party had at first laughed off the Biden “diplomatic boycott,” asserting through its Foreign Ministry and propaganda arms that American officials could not boycott the event because the Chinese government never invited them to attend, so they could not choose not to participate.

“China never plans to invite US and Western politicians who hype the ‘boycott’ topic to attend the Games and experts said that their so-called boycott is nothing but self-deception,” the Global Times claimed. “[I]n accordance with the Olympic rules, for politicians to attend the Games they must be invited by their own countries’ Olympic committees first and the final decision relies on the International Olympic Committee (IOC).”

Zhao did not specify on Monday if the officials requesting visas for the Olympics were invited separately from any blanket invite to White House officials.