The Taliban terrorist organization issued a statement on Thursday expressing “concern” over clashes between the government and protesters in Kazakhstan this week that have escalated into a Russian military invasion and officers opening fire on civilians.

The Taliban is the de facto ruling government of Afghanistan after 20 years of fighting to return to power. Taliban jihadists returned to Kabul’s presidential palace on August 15, 2021, after President Joe Biden abruptly withdrew all American security forces from the country, leaving the hapless former Afghan government incapable of preventing what ended up being a relatively bloodless Taliban advance.

Afghanistan has, for the past two decades, been the most volatile and violent country in the region. Its Central Asian neighbors have regularly expressed “concern” about the widespread radical Islamic terrorist, brutal tribal warfare, and Western coalition attacks in the country in the aftermath of the September 11, 2001, terrorist attacks on U.S. soil. 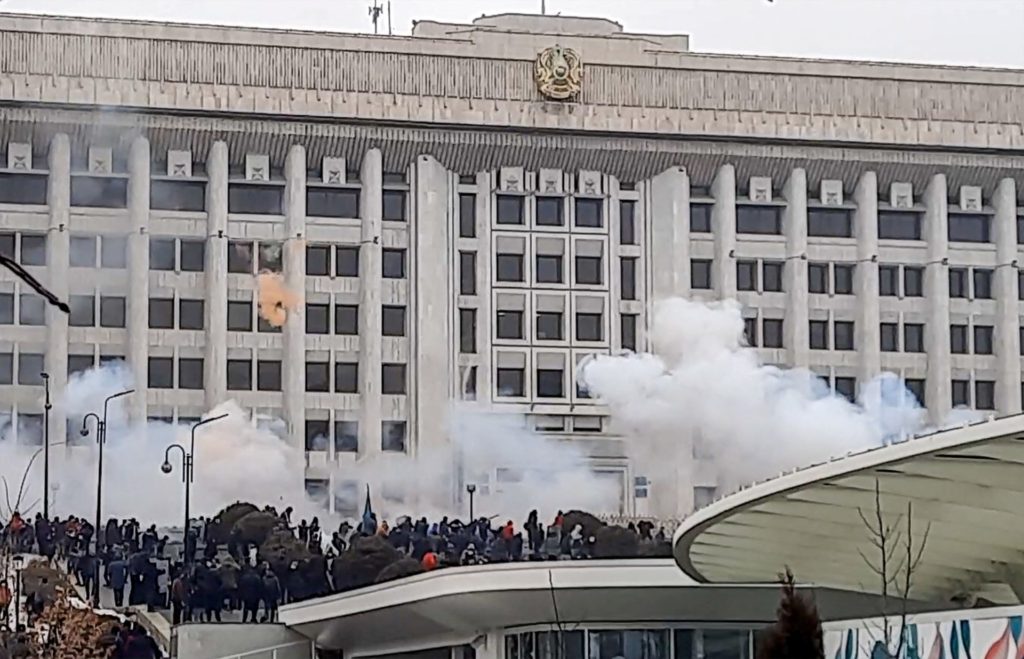 This image grab shows protesters near an administrative building during a rally over a hike in energy prices in Almaty on January 5, 2022. (-/AFP via Getty Images)

A Taliban spokesman – Abdul Qahar Balkhi of the Taliban “ministry of foreign affairs” – issued a statement via Twitter on Thursday noting that the terrorist group was “concerned” that the violence erupting in Almaty, Kazakhstan’s former capital and cultural center, could result in significant regional distress. 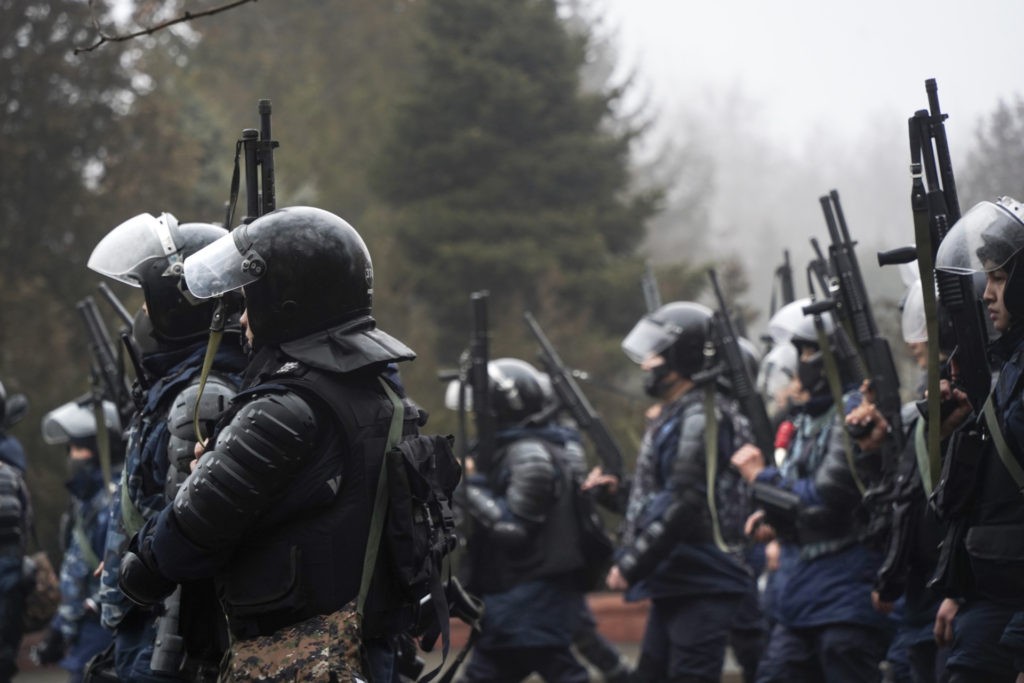 “The Islamic Emirate of Afghanistan [the Taliban] is closely monitoring the current situation in Kazakhstan and, as a close neighbor and trading partner, is concerned about the recent unrest,” Balkhi’s statement read. “It expects the government and the protesters to resolve the current problems through dialogue and peaceful means so that stability and peace can return to that country.”

“The Islamic Emirate considers security and political stability in the region as a precondition for economic growth, trade and a prosperous life of the people,” the Taliban concluded.

The Taliban statement follows months of protests on Afghan soil, many led by women who fear the Taliban’s imposition of violent sharia dictates that essentially strip women and girls of all basic civil rights. In Kabul, the Taliban has tolerated the existence of these protests but completely ignored the demands to allow women to work, girls to go to school, and both to exist peacefully in Afghan society. Outside of the capital, however, incidents of Taliban jihadists opening fire on protesters have been documented.

No country around the world has accepted the Taliban as the legitimate government of Afghanistan, though no other contenders to the position exist. The former president of Afghanistan the Taliban deposed, Ashraf Ghani, fled to the United Arab Emirates (UAE) on August 15 and has not claimed leadership of the country since. In his first interview since fleeing last month, Ghani told the BBC that he did not intend on fleeing and did not understand he would leave the country when hopping aboard a helicopter that day. He also denied claims that he fled the country with upwards of a hundred million dollars. Nowhere in the interview did he claim to be the legitimate president of Afghanistan and described his own government as “erased.” 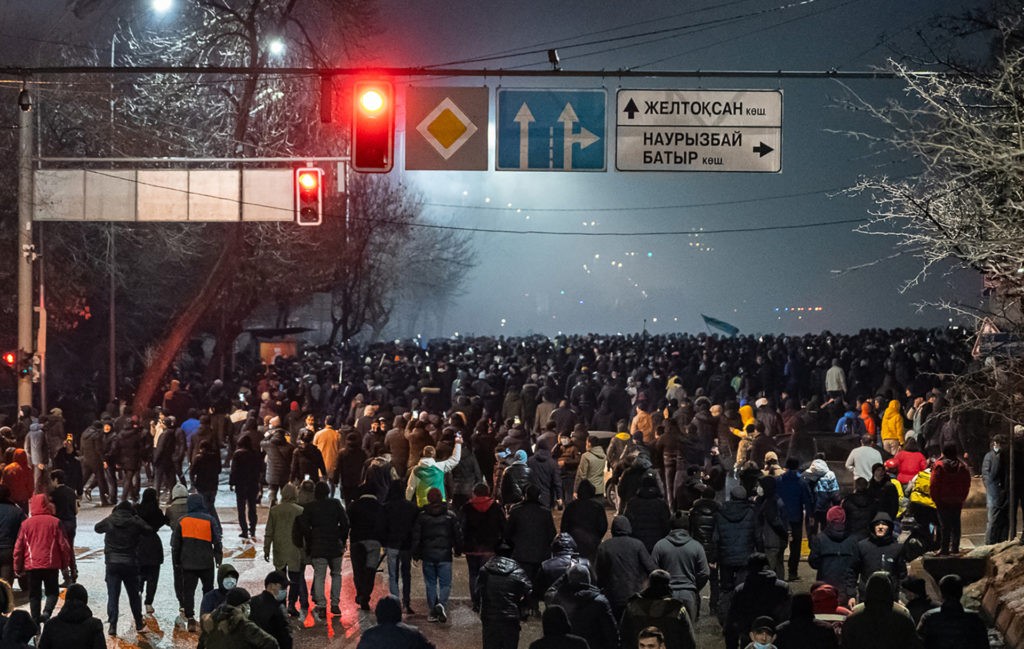 The president of Kazakhstan, Kassym-Jomart Tokayev issued orders on Friday for police and soldiers to “shoot to kill” protesters in Almaty after a violent week that has resulted in reports of dozens of deaths on both sides of the conflict. Protests initially erupted in response to a hike in fuel prices on January 1, but have since morphed into calls to eradicate the Tokayev administration entirely, objecting to evidence of fraud and illegitimacy in the 2019 election that made him president. Protesters also object to the outsized influence in Tokayev’s government that Nursultan Nazarbayev, the prior longtime ruler of the country, continues to have on the nation. 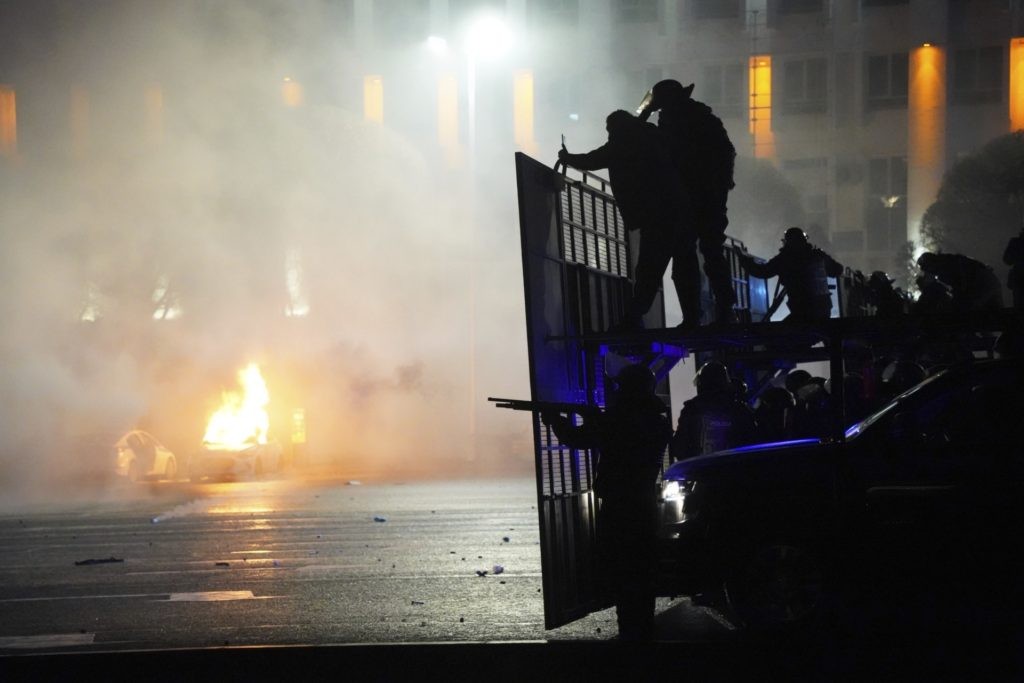 A police car on fire as riot police prepare to stop protesters in the center of Almaty, Kazakhstan, Wednesday, Jan. 5, 2022. (AP Photo/Vladimir Tretyakov)

In addition to violence against protesters on the part of Tokayev’s forces, Kazakhstan called in Russian paratroopers to attack Kazakh civilians. Authorities reported an unspecified dozens of protesters killed by Friday and at least 12 police and law enforcement officials. Reports in Russian media claimed that the protesters had beheaded at least one police officer.

The Kazakh Interior Ministry announced upwards of 3,000 arrests as of Friday and claimed the situation had returned to order. Authorities also claimed to have “liquidated” 26 people, though reports of officers opening fire into large crowds suggest much higher death tolls.

“Though sporadic gunfire could still be heard in the main city of Almaty early on January 7, the unrest over a fuel price hike that has ravaged many cities in recent days appeared muted,” Radio Free Europe/Radio Liberty (RFE/RL) observed on Friday.

In a statement that day, Tokayev declared all protesters “bandits” and “terrorists.” Reports did not indicate that he set any timetable for the removal of Russian troops from the country now that order had “basically” returned.

An eyewitness to the Almaty protests, activist Aigerim Tuleuzhanov, told RFE/RL on Friday that the protesters were not terrorists and mostly consisted of young Kazakhs seeking an exit from the repressive shadow of Nazarbayev. She insisted that the crowd was unarmed.

Confirmation of details on the ground has become even more difficult since the Tokayev government shut down the internet.