The number of women of childbearing age — between 15 and 49 years old — in China decreased in 2021 by 5 million, China’s National Bureau of Statistics (NBS) announced on Monday.

NBS director Ning Jizhe said “2021 saw about 5 million fewer women of childbearing age (between 15 and 49) than in the previous year,” while discussing China’s latest population data at a press conference on January 17.

“Other factors included delaying marriage and births due to the intentions of couples and the pandemic,” he revealed.

These numbers reveal that China’s birth rate for 2021 was the lowest in 61 years. 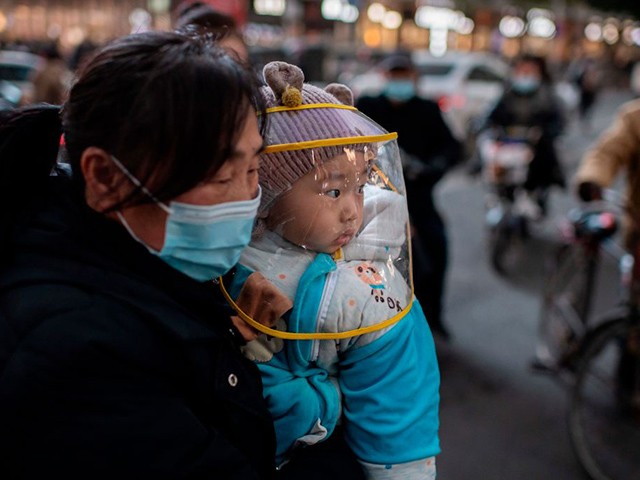 A woman wearing a face mask holds a baby that wears a protective shield during rush hour on a street outside of a shopping mall complex in Wuhan on January 13, 2021. (NICOLAS ASFOURI/AFP via Getty)

Chinese demographers anticipated a “population zero-growth period” for China from 2021 to 2025, according to Du Peng, a sociology and population studies professor at the Renmin University of China. Du told China’s state-run Global Times on Monday demographers based this grim prognostication on China’s waning new births and aging population, which had already become evident in recent years.

“[T]he general trend of zero growth will not be altered,” Du predicted of China’s population prospects on January 17.

China’s ruling Communist Party has long imposed limits on the number of children couples in the country may have. Beijing currently allows families to have up to three children. The Chinese Communist Party raised the child limit to three in May 2020 after previously increasing it to two in 2016. The Chinese Communist Party allowed couples to have no more than one child from about 1980 until 2016. Beijing imposed its infamous “one-child policy” in the late 1970s in an effort to control what was then a booming Chinese population, killing over 400 million people.

China now suffers from not only the prospect of a shrinking population but also demographic warping after the “one-child policy,” coupled with a cultural preference for boys, caused generations of Chinese women to selectively abort their female babies for over four decades. The result is a modern population in which the number of Chinese men aged 20 to 40 years old outnumbers Chinese women in the same age group by 17.5 million.