Chinese state media was not much impressed with President Joe Biden’s press conference on Wednesday afternoon, labeling his first term a failure because his spending agenda crashed and burned, his handling of the Wuhan coronavirus pandemic is “politicized,” and – worst of all in the eyes of Chinese commentators – he is still trying to “contain” Beijing.

China’s state-run Global Times was willing to grant Biden a few points for having “some accomplishments, such as the passage of a $1.9 trillion coronavirus relief package and a $1.2 trillion bipartisan infrastructure deal.”

Those were Biden’s only positive grades in his report card from the Chinese Communist Party. The Global Times theatrically harangued him for doing a poor job of containing the pandemic China unleashed – even as the Chinese government struggles to conceal the extent of its own coronavirus wave and floats absurd conspiracy theories about tainted Canadian mail to explain why a disease it supposedly eradicated has returned with a vengeance. 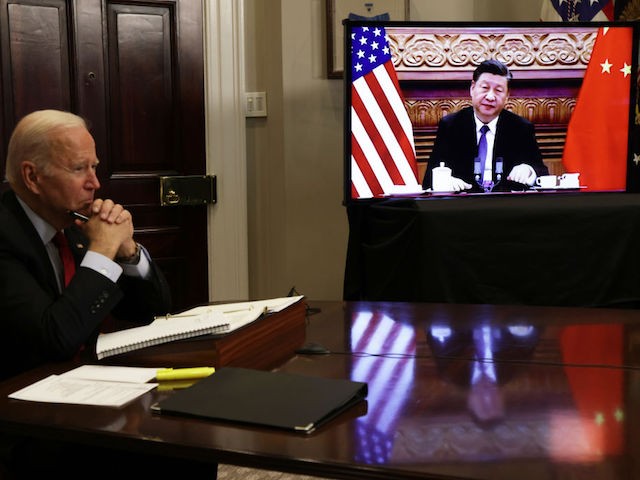 The Chinese paper cited Biden’s open borders as an example of why his “politicized” response to the coronavirus has been ineffective – a criticism no left-wing American newspaper or TV show would dare to level – but did not dwell upon that point.

Instead, the Global Times moved on to a foreign policy critique that mentioned Biden’s disaster in Afghanistan in passing but focused mostly on matters of interest to Beijing, such as the AUKUS submarine deal, “unfair economic sanctions against Chinese firms,” support for Taiwan, and criticism of China’s human rights abuses.

On the latter point, the Global Times recalled Chinese diplomats ambushing Biden’s hapless Secretary of State Antony Blinken at a March bilateral summit in Alaska, portraying it as a sadly necessary beatdown that should have taught the Biden administration the error of its ways.

The Global Times noted Biden is “not a young or energetic leader, and his image is old and slow,” but it cut him some slack for a disastrous year by arguing the American system is so unruly, corrupt, and inefficient compared to China’s glorious authoritarianism that Biden was doomed to fail.

The editorial claimed Republican opponents are ready to tie the president’s hands no matter what he tries to do, the U.S. economy is “too fragile to support Biden’s ambitions” thanks to rampant inflation, and American society is paralyzed by its political and cultural divisions, unlike unified and productive China.

“But other observers believe that Biden would like to have a diplomatic legacy for the rest of his term on climate issue or fighting the pandemic, and he needs China’s support, so the future of China-U.S. ties would be complicated and uncertain,” the Global Times concluded optimistically.