The Kremlin, Russian state media, and local officials on Friday accused Ukrainian forces of conducting a helicopter strike on a fuel depot near the southern Russian city of Belgorod. Ukrainian officials could not confirm their military was responsible for the explosion at press time.

Russian social media channels posted videos of a huge fire burning at the Belgorod facility on Friday morning. The facility is owned by Rosneft, Russia’s national oil company. At least eight of the fuel tanks were reportedly on fire:

Vyacheslav Gladkov, governor of the Belgorod region, said at least two employees of the fuel depot were injured in the explosion, and nearby residents were being evacuated. Rosneft did not report any injuries and provided no explanation for the blaze.

“All emergency services went to the scene. Measures are being taken to eliminate it,” Gladkov said of the fire. 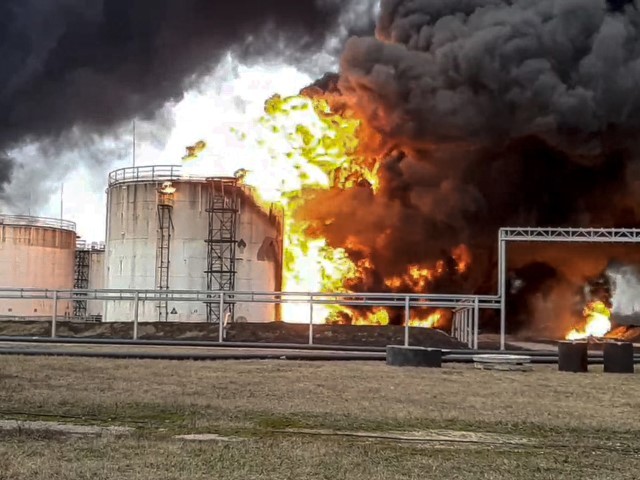 In this handout photo released by Russian Emergency Ministry Press Service on Friday, April 1, 2022, a view of the site of fire at an oil depot in Belgorod region, Russia. The governor of the Russian border region of Belgorod accused Ukraine of flying helicopter gunships into Russian territory and striking an oil depot Friday morning. The depot is run by Russian energy giant Rosneft about 21 miles from the border. The governor says it was set ablaze by the attack that left two people injured. If confirmed, it would be the first attack of its kind by Ukrainian forces inside Russia.(Russian Emergency Ministry Press Service via AP)

Gladkov later claimed two Ukrainian helicopters conducted a low-altitude attack on the facility, which is about 22 miles from the Ukrainian border.

The attack was reported as fact by Russian state media on Friday morning, as in the case of Tass news service quoting a spokeswoman for the Belgorod airport, who said the airport did not sustain any damage.

Kremlin spokesman Dmitry Peskov simultaneously condemned the alleged Ukrainian attack and implied such an assault was impossible because Russian air superiority over Ukraine “is an absolute fact.”

“It’s not for us at the presidential administration to provide assessments, it is professionals and law enforcement agencies that should do that,” Peskov said.

The Kremlin spokesman then accused Ukraine of escalating the conflict by launching an attack on Russian soil.

“Clearly, it’s not what could create conditions for further talks,” he said.

“I can neither confirm nor reject the claim that Ukraine was involved in this simply because I do not possess all the military information,” Ukrainian Foreign Minister Dmytro Kuleba said on Friday.

The Ukrainian Defense Ministry declined to comment on the reported attack, beyond arguing that Ukraine cannot be held responsible for “every catastrophe on Russia’s territory” while it fights to repel the Russian invasion.

The Ukrainian Army General Staff denied responsibility for the attack and suggested it was caused by “careless” Russian workers at the fuel depot. Ukrainian news outlets and social media, however, widely reported the incident as a successful Ukrainian attack on Russian soil, carried out with either helicopter-launched rockets or missiles.