North Korea’s many state news agencies — the only legal form of media in the country — did not mention Biden’s arrival or note to its people that any notable diplomatic activity was happening in South Korea. The North Korean government has not yet publicly condemned Biden or the newly minted government of conservative South Korean President Yoon Suk-yeol for the visit since Biden arrived, even though the visit is scheduled to include an appearance at an Air Force operations center, which would presumably alarm Pyongyang.

America and its ally South Korea are technically still at war with North Korea and its ally, China, as neither side has signed a peace treaty to formally end the Korean War. The Korean War began in 1950 and active hostilities ended with an armistice agreement in 1953. America’s military presence in South Korea is largely a result of the fact that the war remains ongoing, at least in theory.

Friday’s review included an obituary for 87-year-old military leader Hyon Chol Hae, multiple articles on North Korea’s ongoing Chinese coronavirus crisis, and “an article … about the ardent reverence for the leader and the patriotic feelings and efforts shown by all the Korean people after the 8th Politburo meeting of the 8th Party Central Committee.”

On Thursday, North Korean state outlets published “a political essay and an article say that the Korean people are sure to triumph in the epidemic prevention campaign as they are guided by the respected Comrade Kim Jong-un,” an article claiming that mobile service in the country has improved, an update on “the campaign for transplanting rice seedlings,” and the news that dictator Kim had sent yet another birthday spread to a North Korean centenarian. Biden did not make the cut.

North Korea admitted to its first outbreak of Chinese coronavirus in history last week after claiming for over two years that it had not documented a single case of the disease in the country. In less than a week, the communist regime went from reporting zero to upwards of 1 million cases of Chinese coronavirus; North Korea is believed to have a population of about 26 million people. Yoon’s government in Seoul has offered any humanitarian aid needed, but Pyongyang has not responded. 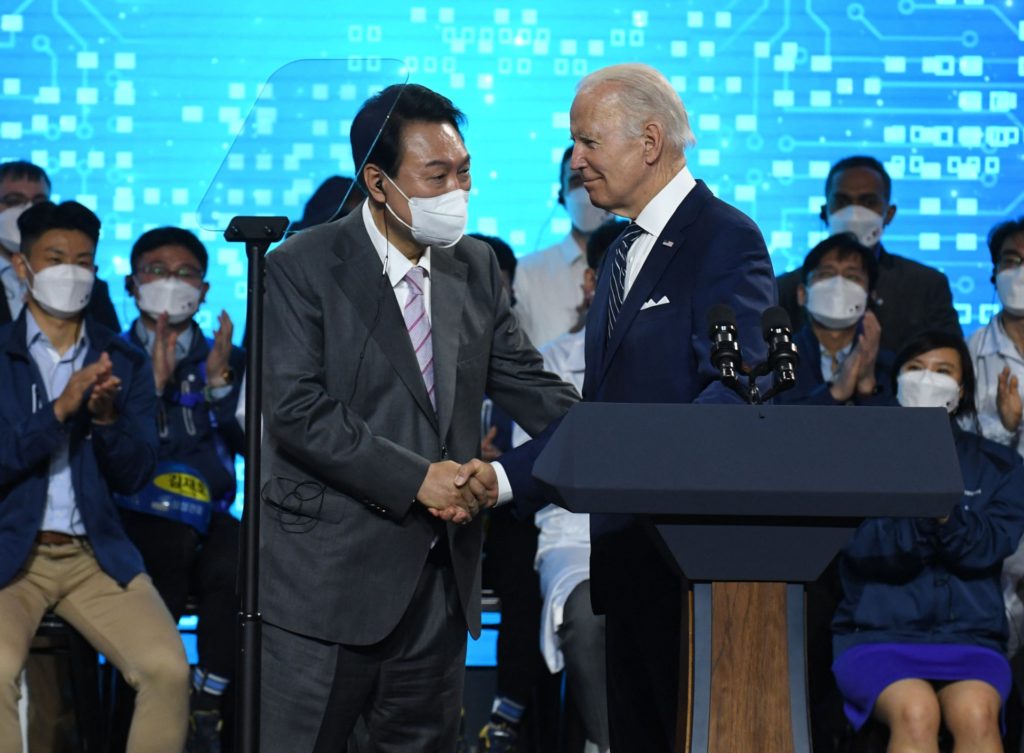 President Joe Biden shakes hands with South Korean President Yoon Suk-youl after a press conference at the Samsung Electronic Pyeongtaek Campus in Pyeongtaek on May 20, 2022. (MIN-HEE/POOL/AFP via Getty Images)

Biden met with Yoon on Friday and the two immediately turned to a visit to a computer chip plant in the city of Pyeongtaek run by Samsung. This is Biden’s first trip to South Korea since Yoon was inaugurated, which occurred only ten days ago. 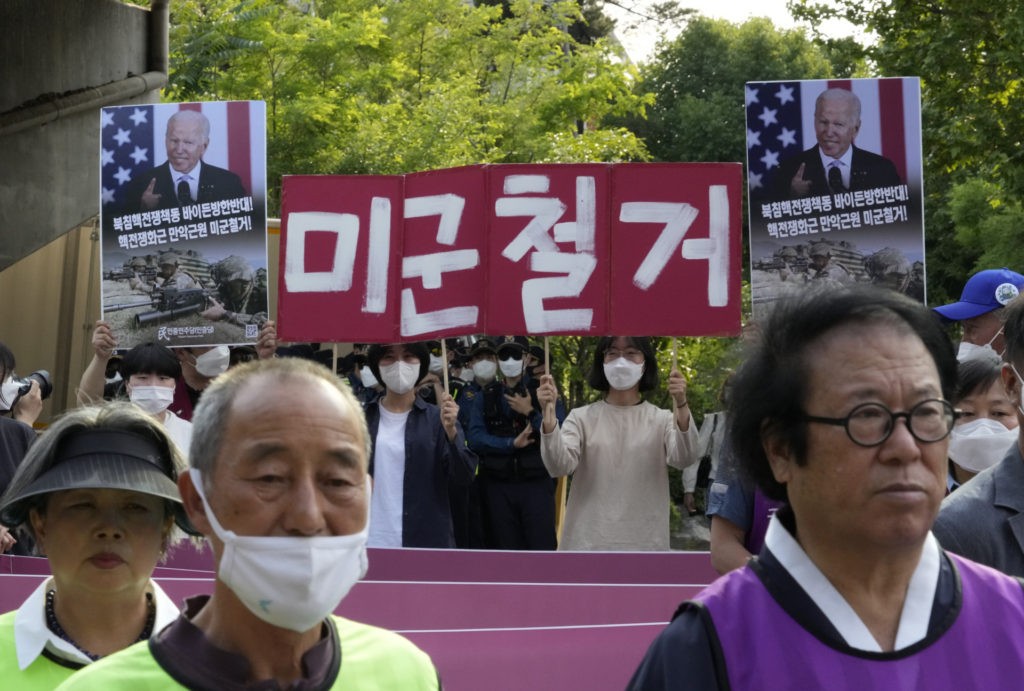 Protesters march during a rally to oppose a visit by U.S. President Joe Biden near the presidential office in Seoul, South Korea, Friday, May 20, 2022. The signs read “Withdrawal of the U.S. troops.” (AP Photo/Ahn Young-joon)

“(The summit) will be an opportunity for the relationship between South Korea and the United States to become more solid and transition to an alliance covering a broader range,” Yoon said of his meeting with Biden. 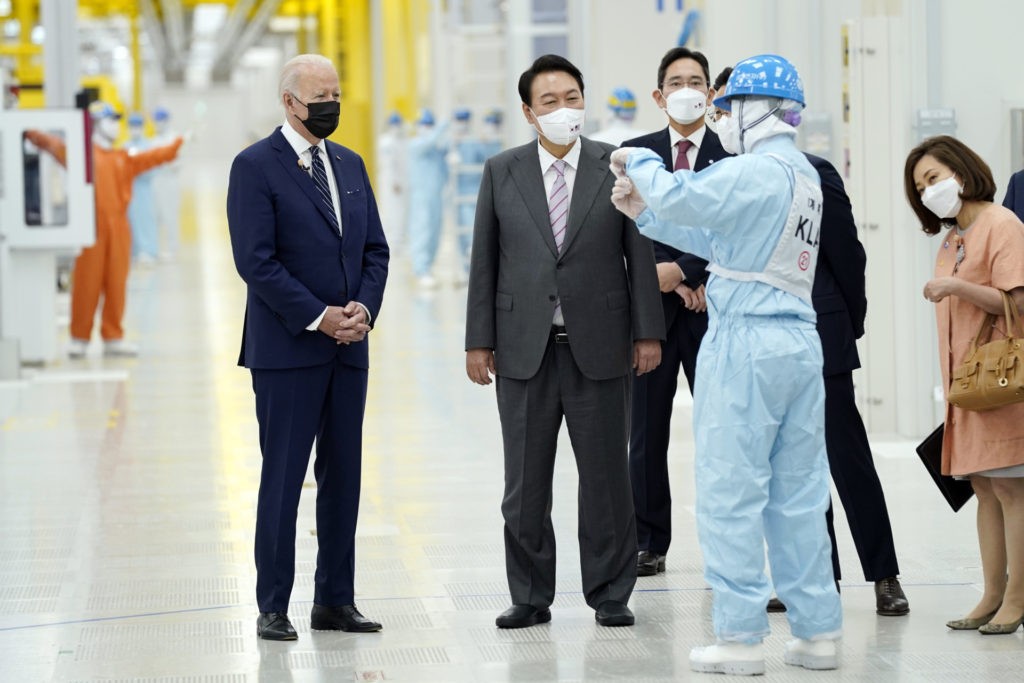 At the Samsung plant, Biden took the opportunity to condemn the Russian invasion of Ukraine, apparently claiming that importing computer chips from South Korea could help safeguard American supply chains from being “dependent on countries that don’t share our values.”

“A critical component of how we’ll do that [remain independent] is by working with close partners, who do share our values, like the Republic of Korea, to secure more of what we need from our allies and partners, and bolster our supply chain resilience,” Biden said, according to the South Korean news agency Yonhap.

Biden did not reportedly remark on America’s much more significant supply chain and import dependence on China, a brutal communist regime currently engaging in genocide.

Yonhap noted that the Samsung plant is the largest of its kind in the world and South Korea is responsible for producing 59 percent of the world’s memory chips and 19.9 percent of computer chips in the world generally, the second-most after America.

Prior to Biden’s arrival, the South Korean National Intelligence Service (NIS) warned that North Korea appears to be preparing an “imminent” nuclear weapons test. North Korea has tested six nuclear weapons in its history, four of them when Biden was vice president, and has not tested a nuclear bomb since 2017.

“We were told that there are signs of a missile launch even though the country is in the midst of the coronavirus pandemic, and with regard to a nuclear test, all preparations have been completed and they’re gauging the timing,” South Korean Rep. Ha Tae-keung said after a briefing with NIS officials on Thursday.

“Our intelligence does reflect the genuine possibility that there will be either a further missile test, including long-range missile test, or a nuclear test, or frankly both in the days leading into, on or after the president’s trip to the region,” Sullivan said.

Kim Jong-un told citizens during a massive military parade in April to prepare for nuclear war.

“The fundamental mission of our nuclear forces is to deter a war, but our nukes can never be confined to the single mission of war deterrent even at a time when a situation we are not desirous of at all is created on this land,” Kim said in a speech at the parade, meant to honor the North Korean armed forces. “The nuclear forces of our Republic should be fully prepared to fulfil[l] their responsible mission and put their unique deterrent in motion at any time.”