The government of North Korea announced that it had documented 1,213,550 cases of “fever” in the country, referring to Chinese coronavirus, between “late April” and Monday, an astonishing number given that the communist regime had claimed not to identify a single case of the disease before last week.

The state-run newspaper Rodong Sinmun claimed that 50 people had died in North Korea from Chinese coronavirus so far.

The government of dictator Kim Jong-un announced on May 12 that a “break” had occurred in the country’s attempts to keep the disease out of the country and that, for the first time since scientists identified the Chinese coronavirus as a novel pathogen in late 2019, Pyongyang had identified confirmed coronavirus cases. Many international observers loudly questioned the communist Workers’ Party of Korea (WPK) claims that it had kept the disease entirely out of its borders for two year, particularly given rumors circulating in dissident media of infectious disease and a bizarre speech a crying Kim Jong-un issued in October 2020 apologizing for a particularly difficult year for his citizens.

Rodong Sinmun reported that Kim has held at least two high-level WPK meetings since last Thursday to personally oversee the situation, one on Saturday and one on Monday. During the more recent meeting, Kim appeared to scold his officials for failing to provide sufficient access to necessary medication or organize the health response to the reported outbreak properly.

“The Political Bureau of the Party Central Committee issued an emergency order to immediately release and timely supply the state reserve medicines to swiftly contain and control the spread of the epidemic and an order for all pharmacies to switch over to the 24-hour operation system,” the state newspaper observed, “but the orders have not yet been carried out properly and medicines have not been properly supplied to pharmacies.”

“Pointing out that the medicines provided by the state have not been supplied to inhabitants through pharmacies correctly in time,” it continued, “he [Kim Jong-un] said it is because officials of the Cabinet and public health sector in charge of the supply have not rolled up their sleeves, not properly recognizing the present crisis but only talking about the spirit of devotedly serving the people.”

“He [Kim] strongly criticized the Cabinet and public health sector for their irresponsible work attitude and organizing and executing ability,” according to Rodong Sinmun. “Saying that most of pharmacies have not been arranged so as to successfully fulfill their function and they are in such a poor situation as they don’t have medicine store houses except showcases, he referred to the situation in which salespersons offer service without proper white gowns and hygienic environment does not reach the standard.”

The government newspaper seemed to nonetheless blame the documented coronavirus deaths on popular ignorance in a separate article, claiming that some North Koreans had been “careless” in medicating themselves properly.

“As regards the fact that those, careless in taking drugs due to the lack of knowledge and understanding of stealth Omicron variant virus infection disease and its correct treatment method, assumes a large proportion of the dead,” Rodong Sinmun alleged, “since the outbreak of the present anti-epidemic crisis, various undertakings are being conducted urgently to remedy it.”

In announcing the outbreak last week, the North Korean government, through its popular media arms, called it “a most serious emergency case of the state” and claimed that Kim had ordered a lockdown on “the entire country.”

“Emergency measures are being taken to block all provinces, cities and counties across the country, isolate working units, production units and living unions,” Rodong Sinmun reiterated on Saturday, “make a more strict concentrated medical checkup of all inhabitants to find out all persons with fever and abnormal symptoms and thoroughly isolate them and actively treat them.”

North Korea’s communist regime claimed to have documented zero coronavirus cases before the vague timeline of “late April” prior to last Thursday. It had reported only one “inconclusive” test to the World Health Organization (W.H.O.) in August 2020. North Korea shares borders with China, the origin nation of the Chinese coronavirus, and two of the countries most severely affected by the pandemic, Russia and South Korea, leaving many unconvinced that it had successfully kept the virus out.

The announcement of a “total” lockdown last week makes North Korea one of the few countries left in the world still implementing mass house arrest to attempt to keep case numbers low. Other than the Pyongyang regime, China is the only major country on the world stage to adhere to the policy, continuing to keep 26 million residents of Shanghai, its largest city, locked down as of press time. The Shanghai lockdown has devastated China’s economy and triggered significant civil unrest and global condemnation.

“Most of the ones who tested positive are officers and soldiers who took part in the military parade … on April 25,” the anonymous guard claimed. “The health authorities reported the incident to the national emergency quarantine command, who in turn sent it in as a No. 1 [top importance] report.” 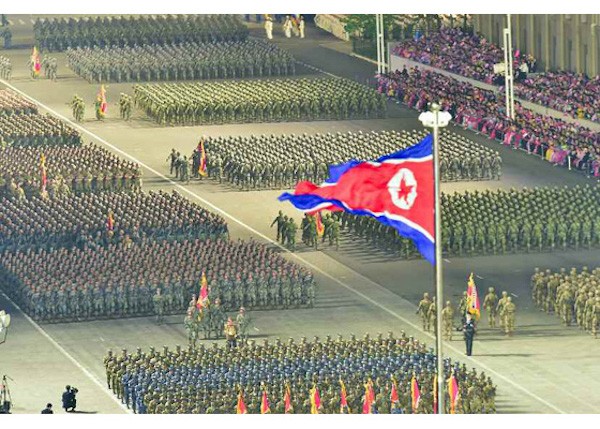 Another guard told RFA that the regime had ordered soldiers to wear gas masks to prevent the disease from spreading.

The South Korean newspaper JoongAng Ilbo reported on Monday that sources familiar with Pyongyang-Beijing relations have evidence that North Korea reached out to China for help procuring basic supplies like coronavirus testing kits.

“According to the sources, the items specifically requested by North Korea include polymerase chain reaction (PCR) test kits and medicines to treat [Chinese coronavirus],” JoongAng Ilbo reported. “Talks on the delivery methods and amount of equipment are currently underway between the two countries, the sources said.”

“We must not hold back on providing necessary assistance to the North Korean people, who are exposed to the threat of the coronavirus,” Yoon said on Monday, speaking to the National Assembly for the first time since his inauguration on May 10. “If the North Korean authorities accept, we will not spare any necessary support, such as medicine, including [Chinese coronavirus] vaccines, medical equipment and health care personnel.”

North Korean officials have repotedly not responded to the offer at press time.