If a week is a long time in politics, 24-hours can seem like an eternity, especially when a White House administration is confused by basic historical facts.

U.S. Vice President Kamala Harris amply illustrated this Thursday when she ended her four-day trip to Asia with a journey to the Demilitarized Zone (DMZ) dividing the Korean Peninsula.

During the stop she confused onlooks by asserting the United States has a “strong alliance” with “the Republic of North Korea.”

KAMALA HARRIS: "The United States shares a very important relationship, which is an alliance with the Republic of North Korea." pic.twitter.com/H2dI5UYOlo

“It is an alliance that is strong and enduring,” she added, intending to refer to the Republic of Korea, which is South Korea’s official name.

Her gaffe came barely 24-hours after President Joe Biden was himself confounded by events when he mistakenly gave a White House shoutout to Rep. Jackie Walorski (R-IN), as Breitbart News reported.

“Jackie are you here? Where’s Jackie?” Biden asked after thanking several bipartisan members of congress. “I didn’t think she was going to be here,” he added.

Fox News noticed the Harris error, reporting the vice president then continued her remarks by professing the U.S.’s support for South Korea’s defense against the increasingly-aggressive North Korean government.

“I cannot state enough that the commitment of the United States to the defense of the Republic of Korea is iron-clad, and that we will do everything in our power to ensure that it has meaning in every way that the words suggest,” Harris said.

At the DMZ, Harris went to the top of a ridge, near guard towers and security cameras. She looked through bulky binoculars as a South Korean officer pointed out military installations on the southern side, AP reports. 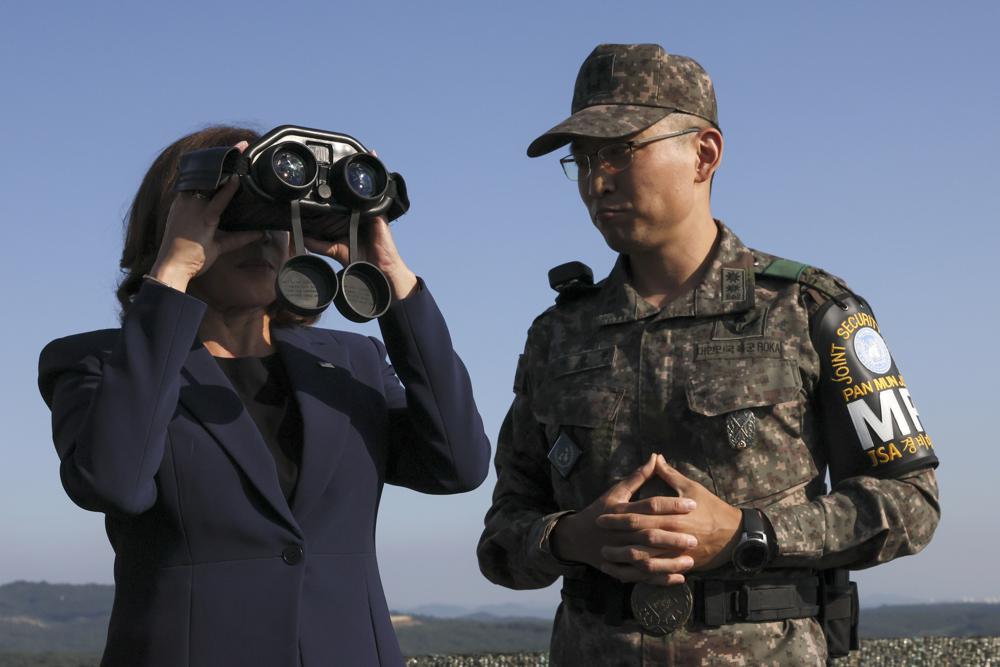 Then an American officer pointed out some of the defenses along the military demarcation line, including barbed-wire fences and claymore mines. He said American soldiers regularly walk patrols along a path.

Harris departed from Osan Air Base to fly back to Joint Base Andrews in Maryland at the conclusion of the DMZ visit.