China’s repressive “zero-Covid” policy — which imposes brutal lockdowns, stays in dirty quarantine camps, police brutality, starvation, and lack of access to health care on citizens to allegedly protect them from Chinese coronavirus infections — has made protests and riots part of a new, post-pandemic new normal in the country.

While many countries around the world, including some parts of America, violated the civil rights of their citizens through much of the past two years in attempts to contain the Chinese coronavirus pandemic, communist China currently remains the only nation to insist on house arrest as a form of epidemic management, resulting in criticism even from its allies at the World Health Organization (W.H.O.). At home, years of iron-fisted rule resulting in minimal public dissent against the Communist Party began cracking in the early months of 2020, when residents of Hubei province, where the pandemic began, rioted and attacked police.

As lockdowns have persisted, so too have reports of protest signs surfacing with insults against dictator Xi Jinping, Chinese citizens marching in the streets against their regime, and imprisoned citizens brawling with “health workers,” breaking out of quarantine prisons, and flipping police cars. 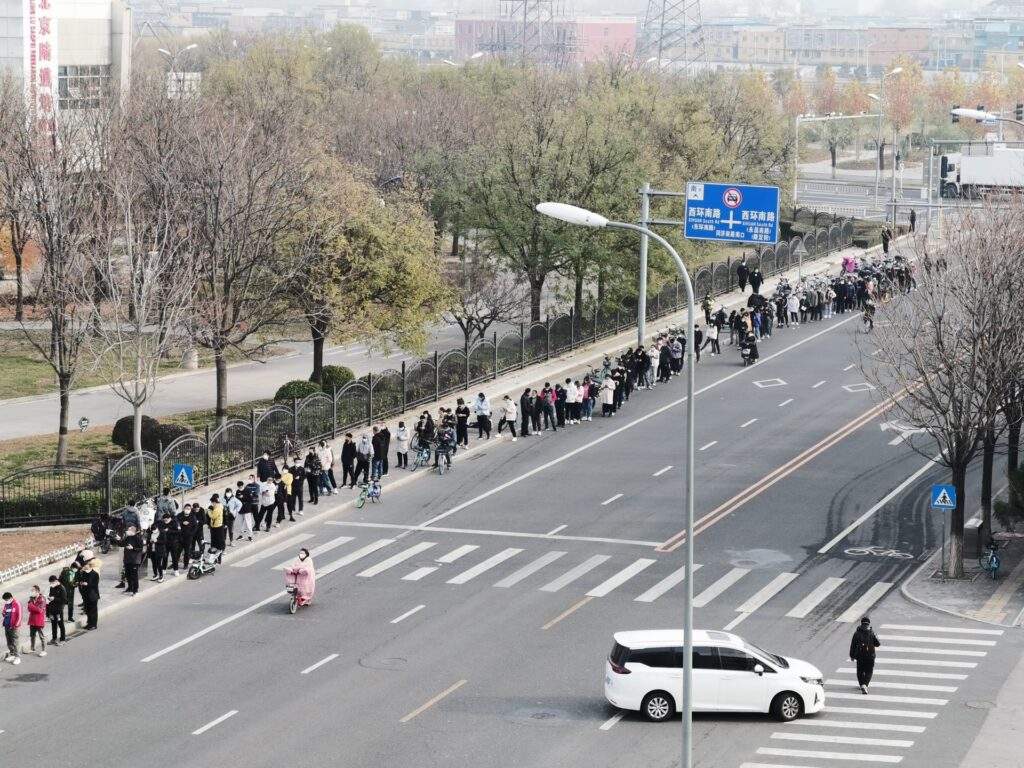 Prior to the pandemic, public displays against the regime were rare and often prompted by government incompetence, not necessarily ideological differences. In recent memory, the largest anti-government outbursts occurred following the Changsheng Biotechnology vaccine scandal of 2018, in which that company watered down vaccine doses for profit, resulting in as many as 1 million children going effectively unvaccinated from potentially lethal diseases such as rabies.

The Changsheng scandal prompted an unprecedented scene in Jiangsu province in 2019: angry parents surrounding and assaulting a health worker, shouting “Beat him! Beat him!” 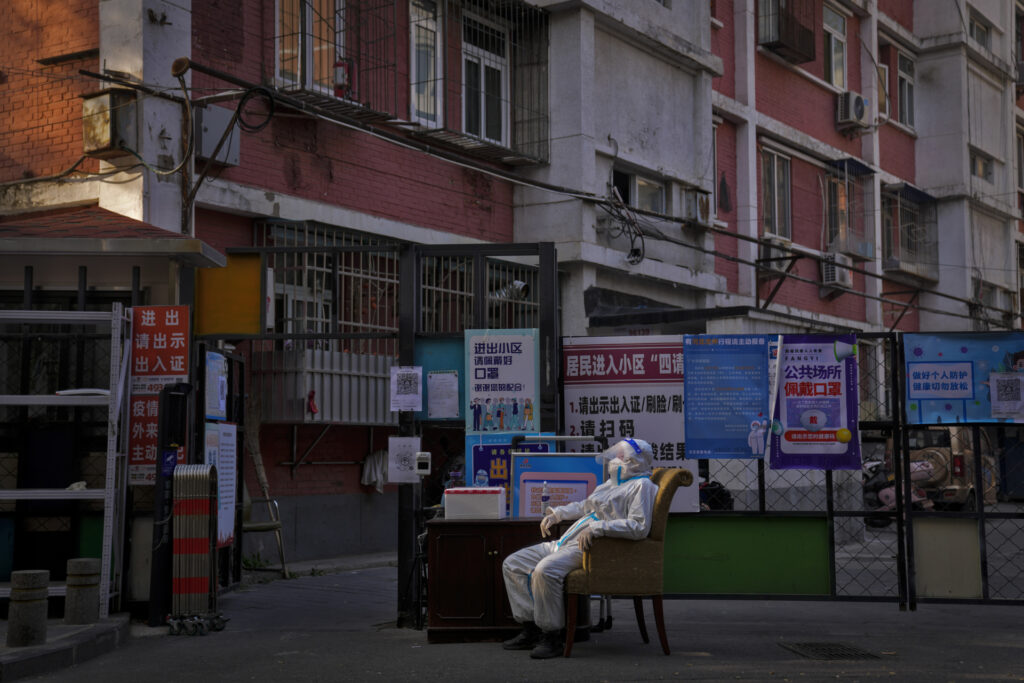 A security guard in protective suit keeps watch at an entrance gate to a neighborhood in Beijing, Wednesday, November 23, 2022. The ruling Communist Party promised earlier this month to reduce disruptions from its “zero- COVID” strategy by making controls more flexible. But the latest wave of outbreaks is challenging that, prompting major cities including Beijing to close off populous districts, shut stores and offices and ordered factories to isolate their workforces from outside contact. (AP Photo/Andy Wong)

Such scenes have become increasingly common against coronavirus lockdowns. Now, the NGO Freedom House revealed in a report published last week, anti-communist protests are “a daily occurrence in China.”

“Not only is dissent in China frequent, it’s also widespread. Since June, people have protested in nearly every province and directly administered city,” Freedom House detailed. “Moreover, even as authorities make every effort to prevent protestors from connecting, we found many instances where people manage to form decentralized movements that increase the impact of their dissent.” 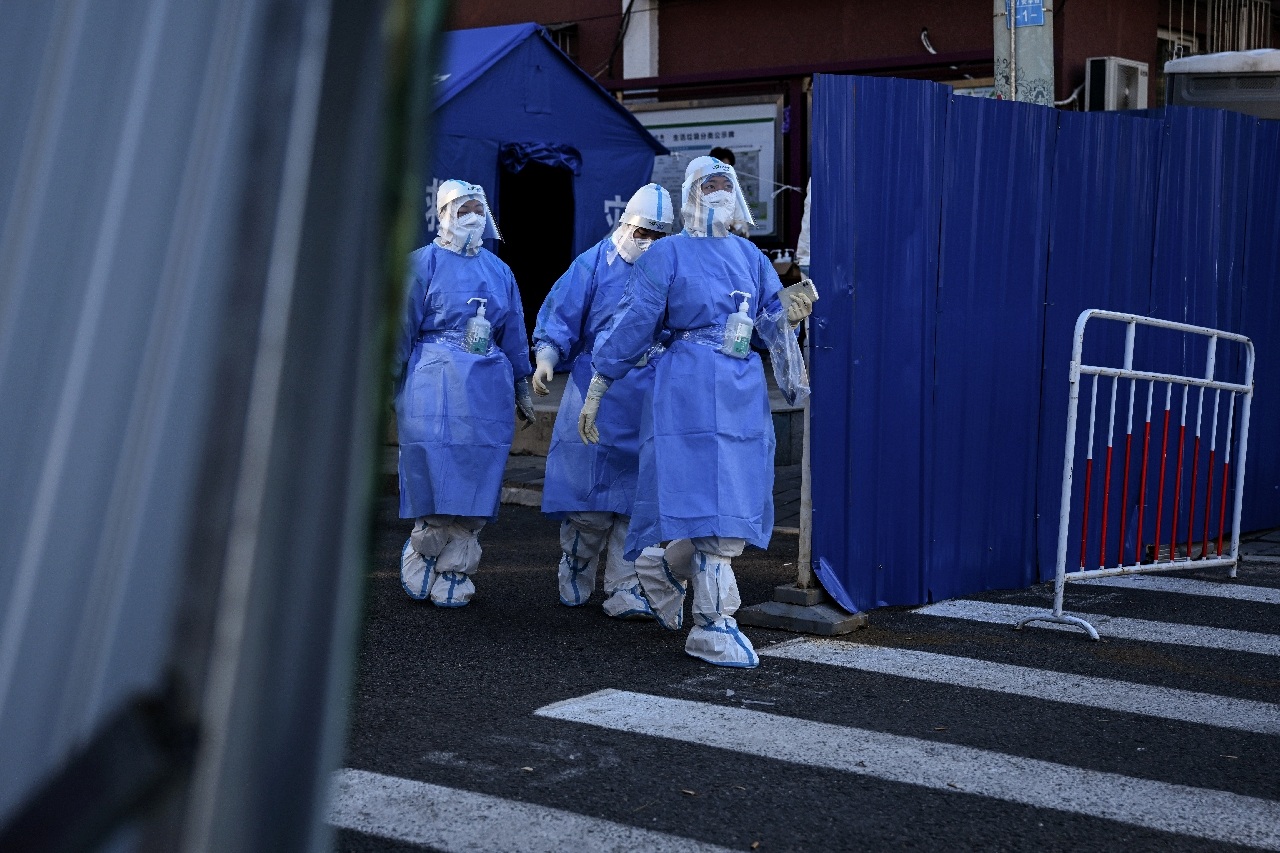 Struggling to document every instance of anti-regime protest, Freedom House launched a project, the China Dissent Monitor (CDM), specifically designed to do so. As part of its first report, the CDM confirmed 668 protest or acts of dissent in China between June and September of this year. The initiative defined acts of dissent as protests, “occupations, strikes, protest banners and graffiti, and notable online dissent such as large-scale hashtag campaigns and viral posts.” 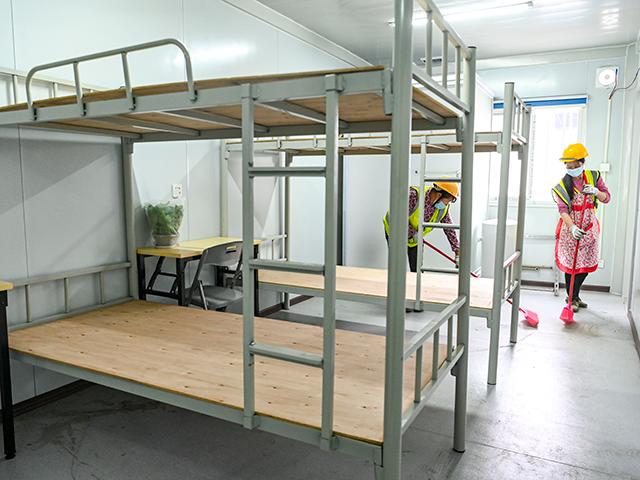 CDM noted that the lockdowns were a small part of a longer list of complaints that Chinese citizens denounced, many of them not directly targeting Xi Jinping but all enabled or created by the communist regime. 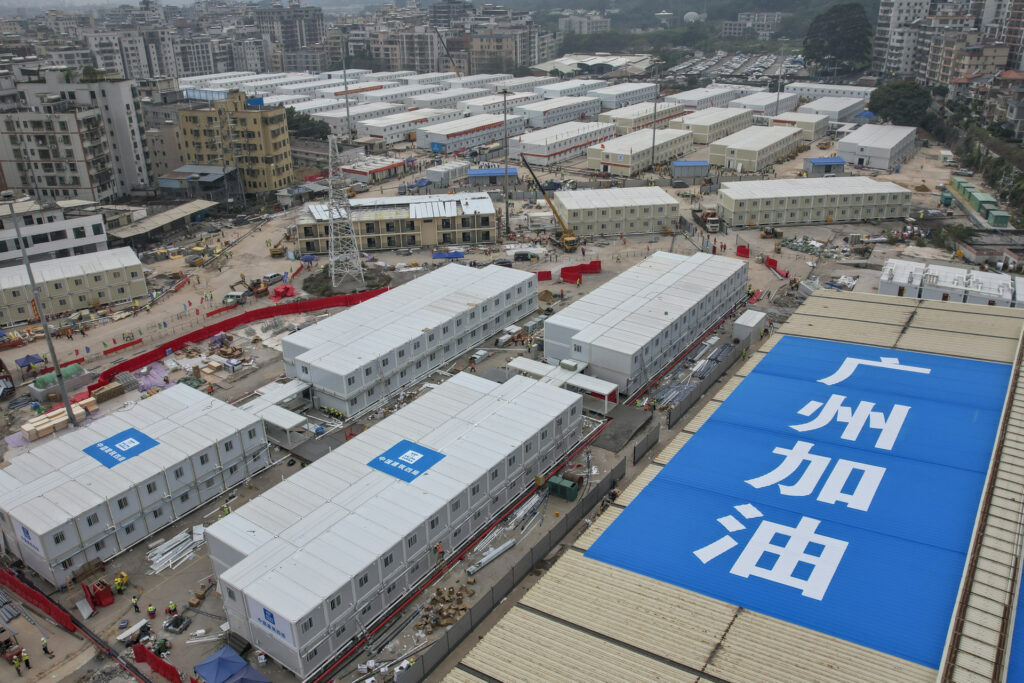 Aerial view of the construction site of a makeshift hospital for COVID-19 patients in Baiyun district on November 18, 2022 in Guangzhou, Guangdong Province of China. (Chen Jimin/China News Service via Getty Images)

“Labor rights violations” is a category that likely includes the enslavement of thousands, if not millions, of Uyghurs and other indigenous people of East Turkistan in concentration camps and factories nationwide, manufacturing products for household-name companies such as Nintendo, Nike, and Apple. It would also include complaints such as the chaos currently engulfing Foxconn’s iPhone factory in Zhengzhou, the world’s largest, following a government coronavirus lockdown that resulted in potentially hundreds of panicked workers running out of the factory for their lives. After the government replaced some of those workers, offering lucrative bonuses, riots erupted on Tuesday and Wednesday when Foxconn did not pay them.

“Stalled housing” is likely a reference to an ongoing real estate crisis triggered by developers promising to rapidly build homes in deals that required buyers to pay mortgages, then simply not doing so. Protesting homebuyers stopped paying their mortgages en masse in July, threatening the stability of the companies affected and resulting in China’s central bank freezing funds. That same month, in Zhengzhou – where the iPhone factory is also located – a mob of about 1,000 people stormed several rural banks demanding their money be unfrozen, a chaotic situation that Chinese propaganda outlets condemned Western media for “hyping up” by noticing it.

No issue has prompted dramatic acts of protest, but individual and collective, in China than the lockdowns. In the former category, a man later identified as Peng Lifa hung two banners on one of Beijing’s most prominent bridges in October condemning the lockdowns, the communist government, and Xi Jinping personally, calling him a “dictator” and “traitor.” Peng reportedly snuck up onto Beijing’s Sitong Bridge, hung his banners, and started a small fire so people down below would look up and see his protest. One banners read: “No PCR tests, but food; no lockdowns, but freedom; no lies, but respect; no Cultural Revolution, but reform; no dictator, but vote; no [to being] slaves, but we the people.”

The protest was all the more notable because it occurred during the Communist Party Congress, an event that occurs every five years to appoint Party leadership and set the agenda for the next five years. Under Xi Jinping, it has become a coronation event in which no potential successors to his rule or any dissent from his cult of personality are visible.

Peng Lifa inspired a street march in Shanghai later in October, in which two people carried banners that, rather than carrying any substantive messages, read only: “Don’t Want ____ ; Want ____,” copying the structure of Peng’s banner’s text. Shanghai was subject to one of China’s most brutal lockdowns in the first half of the year, resulting in widespread confrontations with health workers and reports of suicides, food deprivation, and unaddressed medical emergencies.

The largest protest believed to have occurred this year attracted over 600 people in Ghulja, a city under lockdown in East Turkistan. After weeks of desperate Uyghurs posting videos to China’s censored social media outlets — flooding them with lockdown protests, demands for food and medicine, and even videos of the corpses of their relatives — hundreds defied lockdown orders and stormed the streets in mid-September. Authorities arrested 617 people, according to Radio Free Asia (RFA), mostly young men.

The Communist Party has responded to the protests not by announcing an end to “zero-Covid” and its lockdowns, but using loopholes and language changes to convince the world that it has eased restrictions. In Beijing, for example, the government “advised” residents to stay in their homes, but did not mandate it – a distinction without a difference in a brutal totalitarian dictatorship. Similarly, in Guangzhou, authorities have not locked down the entire city of 15 million people, but announced a man to expand quarantine facilities by upwards of 200,000 beds, essentially preparing to lock residents down outside their homes.