Deputy Cameron Coleman, who works his regular job as a Hidalgo County Deputy Sheriff, was on his way to sign in and begin his volunteer shift with the Brooks County Sheriff’s Office when he stopped at the rest area, a known illegal alien pickup point. The rest area is located several miles north of the U.S. Border Patrol checkpoint on Highway 281 south of the town of Falfurrias. A group of three Hispanic males approached him and the other volunteer who was riding along with him and asked for a ride to Houston. They had failed to notice the word “sheriff” on his shirt.

He questioned them and quickly determined they were illegal immigrants who had just come in from several days hiking through the hot, dry ranch lands after being dropped off miles below the checkpoint. Two of the immigrants were adult males from Honduras and Guatemala. The third was a 16-year-old male from Honduras. They were all headed to Houston.

Breitbart Texas was riding with another volunteer deputy, Daniel Walden, who quickly responded to the call from Deputy Coleman for assistance. In his regular duty, Walden serves as acting police chief of the Donna Independent School District Police Department.

Upon arriving at the scene, Breitbart Texas leaned the two men and the boy had been dropped off three days prior and had been wandering without food and water.  One of the immigrants admitted he had paid $3,000 to coyotes for transportation. They had become separated from their group and had been left behind to make their own way of die in the heat that had been in the high nineties during that period.

Border Patrol was called to the scene and arrived a few minutes later from the checkpoint area. After documenting the immigrants, Border Patrol requested assistance in transporting two of the three prisoners to the Border Patrol processing center in Falfurrias.

Later that evening Chief Walden and this reporter, while continuing the patrol, encountered another illegal alien on Highway 285 west of Falfurrias. He was wearing all black and walking westbound on the dark road. Walden said he barely noticed him on the side of the road. “He was just a dark shadow that blurred past us as we drove by,” Walden said.

Walden turned his patrol vehicle around and returned to find the immigrant carrying a gallon jug of water that contained a very small amount of brownish water. He looked very weak and exhausted. Walden is, in addition to being a Master Texas Peace Officer, a medic trained to save lives. He gave the immigrant some clean water to drink and some food he had just purchased a little earlier for himself. 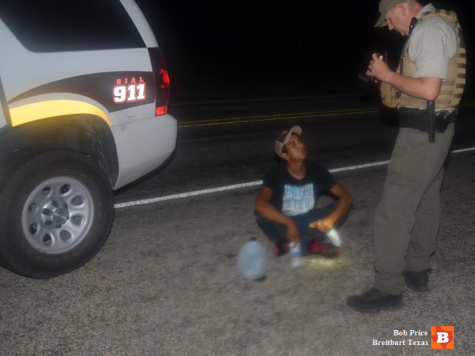 The young man was determined to be a 24-year-old Honduran. He has a wife and 5-year-old daughter at home in Honduras and was headed to Houston to find work to support them. He admitted he had previously been in America and had been deported. The deportation occurred five years ago. He begged Walden not to contact Border Patrol because he feared being sent home.  He vowed to return again if he was deported because of the desperate conditions in his country.

During his journey, the immigrant said he had lots of problems with Mexican gangs. “It is much more dangerous in Mexico than it is in Honduras,” he told Walden. He said he had been beaten and robbed by the Mexican gangs but if he could make it to Houston, it would be worth it because he would be able to work and send money back home to his wife and daughter. He fought back tears several times as he talked about his daughter and what he wanted for her.

He became separated from the group he was walking with and had not eaten in three days. He managed to find some water on a ranch, probably from a cattle tank.

Border Patrol arrived about twenty minutes later and took him to the processing center. He smiled and said, “I will be back.”