Texas State Representative Jason Villalba (R-Texas) has found himself at the center of controversy after filing a bill that would make it a crime for bloggers and independent journalists — as well as regular citizens — to film police officers. Despite the backlash from free speech advocates, Villalba is insisting that his bill “does not infringe on constitutional rights” or “limit liberty in any way.”

The current law, Section 38.15(1) of the Texas Penal Code, makes it a crime if anyone “interrupts, disrupts, impedes, or otherwise interferes with a peace officer while the peace officer is performing a duty or exercising authority imposed or granted by law.”

The bill, HB 2918, adds to the definition of what constitutes “interfering” with an officer’s duties, and would make it a Class B Misdemeanor to film, record, photograph, or document the officer within 25 feet while that officer is performing his official duties. That distance is extended to 100 feet if the person is carrying  a concealed handgun. There is an exception for news media, but the current language of the bill does not include bloggers, independent journalists, or private citizens, and it is not clear whether online media outlets would be included in the exception either.

Specifically, the types of “news media” that would be exempt from the restrictions on filming police officers include only these three categories:

Publications such as Breitbart Texas or The Texas Tribune that are published only online could argue they should be considered “newspapers” or “magazines,” but it is far from clear. What is clear is that someone who runs an independent blog, or an internet radio station or podcast, would not be included. As newsrooms across the country have scaled back staff in recent years, independent citizen journalists have often stepped forward to fill that void, especially when it comes to covering local politics and issues of civil and constitutional rights violations that have not yet captured the attention of the mainstream media.

Villalba’s bill would also make it illegal for private citizens to record their own interactions with police officers. In fact, the language is so broad, in prohibiting “documenting” the police officer’s activities, that taking notes during a conversation with an officer, about what was being said, the officer’s badge number, etc., could be construed as a violation. Besides the fact that law enforcement agencies themselves have acknowledged the role that cameras can play in reducing both incidents and false claims of police brutality — as evidenced by the rising support for police body cameras — this bill directly contradicts established case law precedent allowing citizens to videotape police.

In the 2011 case of Glik v. Cunniffe, the U.S. Court of Appeals for the First Circuit ruled unanimously that a man named Simon Glik had the right to videotape police officers who were arresting a man on Boston Common. The officers had been arresting another man and were punching him, and Glik openly held up his cell phone and videotaped their actions. Glik stood about ten feet away from the officers, did not interfere with them, and did not speak to them until the suspect was in handcuffs and they spoke to him first.

In reaching its decision, the Court said that rapidly changing technology blurred the line between private citizens and journalists, and rejected calls to limit the right to publicly record police officers to traditional journalists. Being able to record police officers was an especially important right, noted the Court, because they have “substantial discretion that may be misused to deprive individuals of their liberties.”

In a press release announcing the court’s decision, David Milton, an attorney with the American Civil Liberties Union who represented Glik said, “Police officers must be trained to respect the right of people to openly record their actions in public,” noting that his client “did what we hope any engaged citizen would do, which was documenting what he thought looked like an improper use of force, and his action in no way interfered with the police.”

Breitbart Texas reached out to Villalba to get his comment regarding this bill, and spoke with him by phone Thursday evening. Villalba was adamant in his defense of HB 2918. “All we’re trying to do is get people to step back when the cops are doing their work,” he said, and “twenty five feet doesn’t seem unreasonable to me.”

Regarding the narrow news media exception in his bill, Villalba told Breitbart Texas that “there was no intention” to eliminate news sources like Breitbart Texas. “You’re intended to fall under the magazine definition.” When asked about independent bloggers, Villalba replied that his problem was that “we just don’t know what their intentions are…some are intending to interfere.” The issue, he said was the “fear and safety of police officers…they don’t know who is there to help and who is there to interfere.”

Villalba insisted that his bill was not an impediment to the work of bloggers and independent journalists, saying that it presented “no limitation whatsoever” on their ability to cover police activity and keep police accountable. “They can always step back 25 feet…all we’re saying is step back a few feet.” He did say that he was interested in hearing testimony from police officers regarding what they thought the proper distance should be.

Breitbart Texas specifically asked Villalba about the situation where an independent journalist is recording as part of a story and then is approached by an officer (as commonly happens in a variety of situations, including the work of Breitbart Texas reporters along the border, who are occasionally approached by Border Patrol or Texas Department of Public Safety officers). Under this bill, once an officer approached, it would be a crime to not immediately turn off the camera. Villalba was insistent that the solution was for the journalist to simply “step back a few feet.”

Villalba was also asked why he believed current law — under which a police officer already has the power to instruct people to move back, clear an area, etc. and can arrest anyone who does not comply — was an inadequate protection for the officers. Villalba told Breitbart Texas that “if you’ve seen these videos, sometimes in the heat of these operations, there’s no time to instruct the crowds to get back.” He described a scenario where there was only one officer on the scene and is getting physically assaulted by the perpetrators he is trying to arrest. “The officer’s trying to do his job, the officer can’t tell the perpetrators, ‘hey stop beating me, I’m going to tell these people to step back and stop filming,’ that just doesn’t occur.”

“I stand by it, I believe strongly in this legislation, I think it will help police officers,” he continued. “We do believe that this is smart policy, good policy that does not limit or infringe constitutional rights, does not limit liberty in any way.”

Many did not share Villalba’s opinion that HB 2918 would “not limit liberty in any way.” Jay Syrmopoulos at The Free Thought Project blog wrote a scathing article, criticizing Villalba’s bill for “attempt[ing] to usurp citizens of the ability to hold law enforcement accountable for their actions by negating people’s ability to create an accurate and impartial record of police interactions,” and noting that the bill’s narrow definition of “news media” would allow “the marginalization of anyone that is not part of the old corporate media structure,” and also meant that “a citizen wouldn’t be able to record their own interaction with an officer.”

“What is important to point out here is that a person without a camera, can be within the distance constraints as described in the legislation and will not be in violation of any law,” continued Syrmopoulos. “The camera, the record of police conduct is what is made illegal in this bill. To deny that it is not a direct attack on free speech is asinine.”

Big Jolly Politics blogger David Jennings was even more direct, tweeting at Villalba, “What in the hell are you thinking? Holy crap dude, you need to pull this bill down. Embarrassing.” Empower Texans President Michael Quinn Sullivan called Villalba “dangerously stupid” for putting forward a bill like HB 2918:

Really didn’t believe “dangerously stupid” could be used to describe a #txlege member. And then I actually read HB2918. Wow.

Villalba himself took to Twitter to defend the bill, with a tweet around 6 p.m. Central Time that insisted that his bill would not stop citizens from holding police accountable or prohibit filming.

HB 2918 is meant to protect officers, NOT restrict the ability to keep them accountable. It DOES NOT prohibit filming. @TMPALegislative — Jason Villalba (@JasonVillalba) March 12, 2015

He also posted a longer note on his Facebook page defending the bill: 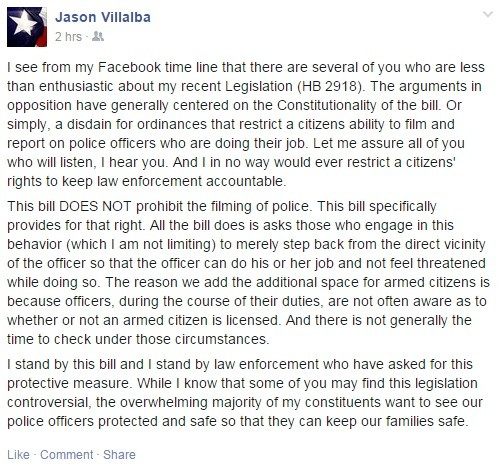 Villalba then continued tweeting late through the night, until about 4 a.m., defiantly defending his bill and daring anyone who disagreed with him to “find me an opponent” and vote him out of office.

@rkecseg84 @MQSullivan I ask you again, if you think you have someone better for HD 114 – Bring it. I respect the will of the people.

If I’ve said it once, I’ve said it 1000 x. #IStandWithThePolice. If you don’t like that, then vote me out office. pic.twitter.com/xO8jFBA309

Austin-based attorney and general counsel for Empower Texans Tony McDonald had serious misgivings about HB 2918, telling Breitbart Texas, “The most important point is that it totally deprives the accused the right to film an encounter.” McDonald also created a graphic illustrating the absurdity of which people Villalba’s bill would allow to be near police officers:

As McDonald points out, HB 2918 would indeed allow people who are armed with a variety of weapons to be in closer proximity of a police officer than a citizen journalist holding up a smartphone. Villalba fired back at McDonald:

@TweetTonyMac @JohnRHorton @Copwatch In all seriousness, do you really think the cops are a threat to our community? My goodness! #Ferguson