In an internal memo dated April 29, 2015, California State Superintendent of Public Instruction Tom Torlakson announced the California Department of Education (CDE) was dropping the “Common Core” name, but keeping the Common Core system. He expected all other California education officials to do the same.  He called it part of the new “California Way.”

The Golden State is implementing a statewide student assessment system called the California Assessment of Student Performance and Progress (CAASPP).

Breitbart Texas obtained a copy of the Torlakson memo, which was sent to all California county and district superintendents, plus charter school administrators.

“I want to let you know that I have changed the way I refer to our new academic standards in speeches and written materials,” Torlakson wrote. “I am no longer using the term ‘Common Core.’ Instead, I am calling them the new ‘California Standards.’”

The state’s chief educator professed his long-standing support for Common Core as “the new standards in English language arts and mathematics,” and said he believes those standards “are going a long way toward updating our education system.”

However, Torlakson added, he also believed the term “Common Core” has outlived its usefulness.

“Why? It confuses some people, and has polarized people in other parts of the country,” he wrote.

The term “Common Core” does not “tell the whole story,” according to Torlakson. Technically, Common Core only includes ELA and math, while the California Standards concept “covers all subjects, including ELA, math, the Next Generation Science Standards, English Language Development Standards and, in two years, the new social science standards,” he noted. 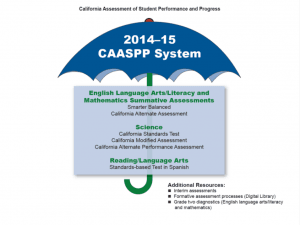 CAASPP’s component programs “play into it and each other,” according to CDE spokesman, Giorgos Kazanis, who spoke to Breitbart Texas about the Superintendent’s letter and CAASPP.

Essentially, the re-branding initiative moves every educational program underneath CAASPP – from innovative new programs, to traditional educational resources that long predate Common Core. Kazanis described Common Core, SBAC, the incoming NGSS, and the upcoming History-Social Science framework as “elements” of CAASPP. The California Standards themselves are elements of CAASPP, as are the “California Way” assessments..

There is even a Cognitively Based Assessment for Learning (CBAL) digital library – an SBAC online, open-source, Common Core-aligned collection of materials to “help educators implement the formative assessment process.”

Teachers will use “deliberate” assessment strategies during classroom instruction to adjust their lessons as they determine how much of the curriculum is retained by each group of students.

Kazanis told Breitbart Texas that while Common Core has ardent critics, his department has seen “a good response on this re-brand from the community and constituents.”

He made it clear the CDE was not dropping its signature element Common Core, but was “heading in the right direction in that we are identifying that this is the CAASPP, the state’s new testing system.”

Both the CMA and CAPA are IEP designated tests. CAPA is for students with significant “cognitive disabilities.” For now, they are pen-and-paper multiple choice exams.  NGSS is a science curriculum, including man-made climate-change theories, from education reformers including Achieve, Inc.

Last year, Wyoming passed on NGSS because of its climate change-based approach to science. Texas has been ridiculed for allegedly rejecting NGSS out of disdain for its material on evolution. (Despite the hype, Charles Darwin lives on in Texas public schools.)

The Lone Star State has made significant contributions to progressive education programs. Several NGSS writers are Texas educators:  a Dallas area secondary science coordinator at one campus of a high-performance consortium; a Houston public school science coordinator, a University of Texas physics professor, who lead the team; and a science education consultant from Austin. Even the Dana Center at the University of Texas at Austin is ready to help implement NGSS.

In his letter, Torlakson pointed out that the newly re-branded California Standards have been “developed and reviewed by California educators.” However, only three contributors to NGSS from California were listed: a team leader retired from San Diego Unified, a non-education team member from Boeing, and a San Jose State geology professor.

Kazanis was unable to identify by name any California educator who created or reviewed these standards, although he recommended visiting the CDE website for more information on the new program, and a timeline for implementation. He said a large number of people were involved in design and implementation.

CAASP also includes a Spanish version of the standards-based Reading/Language Arts test.  Still to come is the History-Social Science framework, according to Kazanis.

In 2013, this reporter attended a teacher development workshop called Civic Engagement and the Common Core at the Reagan Library in Simi Valley. This event was billed as an opportunity for teachers of civics, government, and American history to learn how to integrate the History-Social Science “framework” and informational text materials into instruction for college, career, and citizenship preparation, through Common Core aligned ELA. The moderator was Cal State University Northridge (CSUN) Writing Project director Dr. Kathy Rowlands, an author of the Common Core National Writing Project.

Torlakson dubbed the new California standards “rigorous” – perhaps the most over-used word in 21st Century education. However, Kazanis insisted that “referring to the new California Standards as ‘rigorous’ lets people know we are upgrading virtually all of the key subjects California students need to succeed in 21st century careers and college.”

Kazanis asserted that the California Way was meant to ensure students would be ready to enter college, or begin their careers, “ready to make an immediate impact and contribute because they will develop the skills that are necessary for opportunities a lot earlier in a student’s career.”

He did not specify how they will be made ready, or precisely what challenges children would be prepared to meet. Instead, he deployed euphemistic talking points about “hands-on learning” for the workplace, which he said would help students explore high-tech career pathways that “weren’t available to kids in the past.”

Breitbart Texas asked what criteria would make these opportunities available – a student’s interests and passions, or how well they scored on the mountain of assessments now part of the CAASPP system? Kazanis said he did not have enough information on that topic to offer a comment.

Ironically, CAASPP comes just when parents across the nation are calling for ways to “opt-out” of high-stakes testing. Instead, California is digging in deeper, building a whole educational universe around an assessment system that Torlakson says will be filled with “exciting changes.” The objective is to “transform education in California” — with more tests.