BROWNSVILLE, Texas – The son of the former top leader of the Gulf Cartel and founder of Los Zeta has been sent to prison for trying to smuggle a batch of ammunition into Mexico.

Earlier this week, Osiel Cardenas Jr. went before U.S. District Judge Andrew Hanen, who sentenced him to 10 months in prison and three years of supervised release.

As previously reported by Breitbart Texas, Cardenas was arrested in January after U.S. Customs and Border Protection officers found about 500 rounds of ammunition inside his 2015 Cadillac Escalade, as he tried to make his way from the border city of Brownsville into the Mexican city of Matamoros.

Prior to his arrest by CBP, Cardenas had been out on bond after an August 2014 arrest by Brownsville Police on charges of DWI and unlawful possession of a handgun. Earlier this year, Cardenas pleaded guilty to the ammunition smuggling charge.

Cardenas is the son of Osiel Cardenas Guillen, the man who led the Gulf Cartel until his extradition into the U.S. in 2007 on drug trafficking charges, for which he is now serving a 25-year-prison sentence. The elder Cardenas is also the founder of Los Zetas, who were originally his personal guards, but after his arrest branched out and eventually became their own criminal organization. 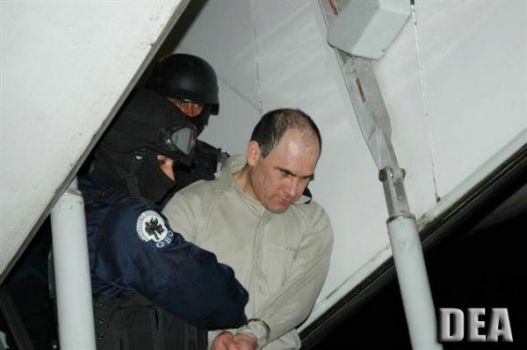 Osiel Cardenas, the one time top capo of the Gulf Cartel and founder of Los Zetas seen during his extradition into the U.S. to face drug charges.

During the sentencing hearing this week, Hanen was given a handwritten letter from Celia Cardenas, the mother of Osiel Jr.

In her letter, written in Spanish and obtained by Breitbart Texas, Mrs. Cardenas asked Hanen for forgiveness for her son’s mistakes. She said he is immature and lacks experience, but that the arrest is a lesson that he will never forget.

“The decision that you take will be the correct one for my son’s life,“ Mrs. Cardenas wrote. “God bless your life and all your work as an authority …”