Daniel Malenfant of the McKinney Fraternal Order of Police (FOP) said that Officer Eric Casebolt, the police corporal in McKinney who resigned under political pressure and death threats, “was a dedicated and decorated officer who in this instance was placed in a high-stress environment that he was not fully prepared for.”

Officer Casebolt is the police officer whose attempt to lawfully detain a teenager at a pool party gone wild was captured in a video that went viral. It went viral because the teenager was a bikini-clad African American 15-year-old girl.

It appeared that the girl, Dajerria Becton, would not obey the officer’s orders to leave the premises of a subdivision pool in McKinney. She also appeared to be obstructing the officer in the operation of his duties.

A melee had broken out at the Craig Ranch community pool after a reported 70 young people and others trespassed on the property. Some of these individuals were allegedly drinking and smoking marijuana, and fights were occurring.

Breitbart Texas reported (with video) one of the assaults that McKinney peace officers responded to. This physical fight allegedly started because of derogatory racial statements that were made.

Officer Casebolt resigned on Tuesday, as reported by Breitbart Texas.

Breitbart Texas reported that the McKinney Chief of Police Greg Conley said the officer’s actions, “as seen on the video of the disturbance at the community pool,” were “indefensible” and “out of control.”

At this time, it is not known how many videos were taken on Friday evening, and whether other videos exist.

A press conference was held in McKinney Wednesday, where the attorney and a spokesman for the McKinney Fraternal Order of Police addressed the assembled reporters.

When asked why Officer Casebolt was not attending the press conference, the FOP spokespersons replied that the officer had received death threats.

Casebolt and his family were at an undisclosed location because the death threats forced them to leave their home. 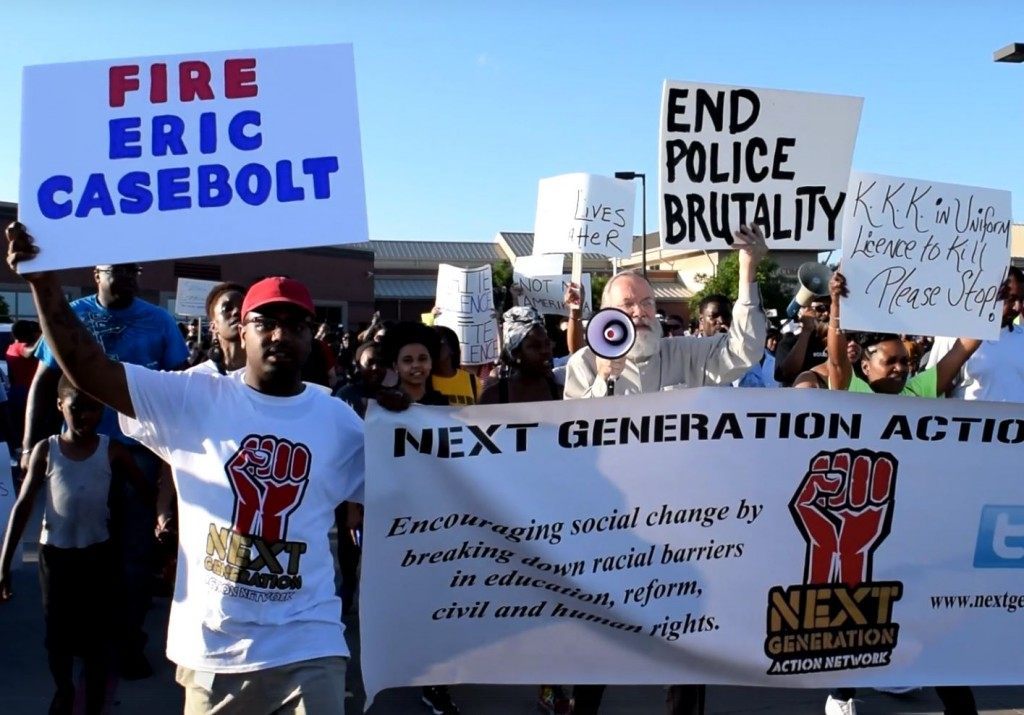 Malenfant said that the officer recognizes that his emotions got the best of him on Friday night; however, he had already responded to two suicide calls right before he arrived at the community pool.

The first call involved an African-American male who shot himself in front of his family and his children, and other parents and their children, while at an apartment swimming pool. The officer had to photograph the body and collect evidence. He also spent quite some time consoling the grieving widow.

The second call involved a teenage girl who was threatening to jump off a roof and commit suicide. Officer Casebolt consoled the young woman until she could be safely accompanied to the hospital.

The attorney for the FOP said that the nature of these two suicide calls were fraught with emotion and took a toll on the officer. She said they serve as a reminder of the dangerous nature of police work that is filled with human tragedy.

The FOP lawyer said that when the call came to respond to trespassing at a pool party, Casebolt was reluctant to respond. He changed his mind after it escalated and there were violent assaults said to be occurring at the community pool. He felt it was his duty to respond to the call.

The FOP attorney said Officer Casebolt’s only purpose was to find out who was involved in any violent assaults. There was nothing racially motivated about his actions when he went to the pool. She said that Casebolt had also detained a white female, something not captured on the video.

The officer’s efforts were hindered when teenagers told others to defy what the peace officers were telling them. Casebolt apologized for how he reacted to those challenges. 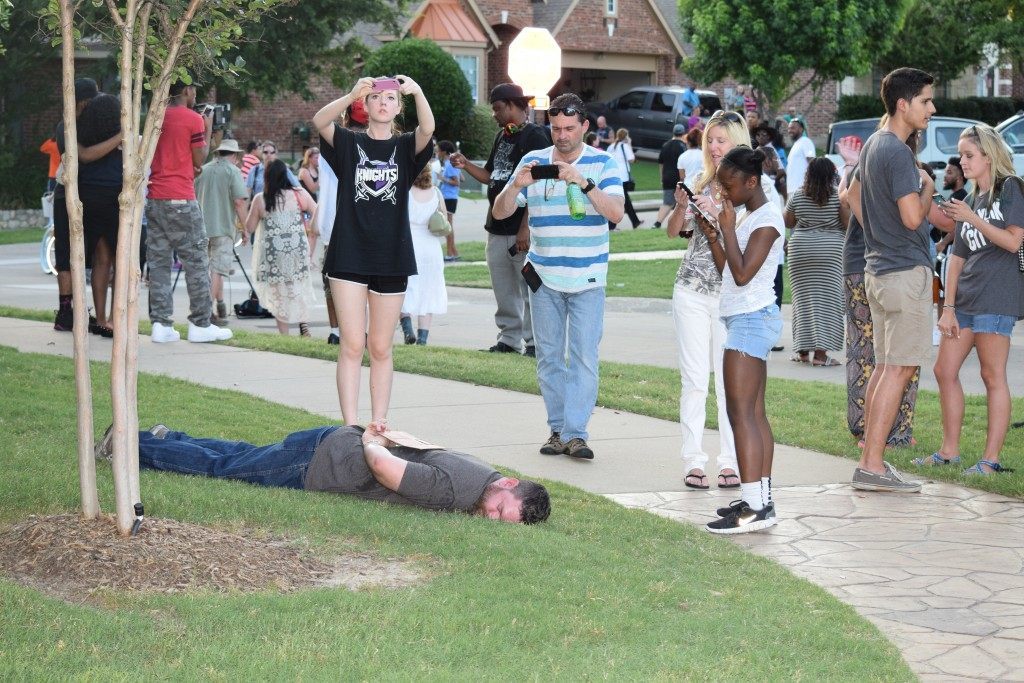 Craig Ranch resident lies in “arrest pose” on the spot where teenage girl was forced to the ground. (Photo: Breitbart Texas/Bob Price)

Resigning was an extremely difficult decision for the officer to make, but he hoped it would help relieve the burden on the police department, and the community, and protect them from any further negative publicity.

The FOP attorney said it was Casebolt’s life-long dream to be a police officer, and that has been foreclosed to him now.

She said that the officer also understood the pressure being placed on the police department and city administrators. He hoped that his resignation would restore the peace of McKinney that was disturbed by this incident.

The officer, Malenfant, and the attorney for the FOP said that Casebolt’s reactions that day were not typical for him. The seven minutes of video that went viral was not representative of his 10 years of service to McKinney P.D.

They said that Officer Casebolt had faithfully and honorably served the department and was a top performer. He had received an Officer of the Year award.

Malenfant told the reporters that “the McKinney FOP and Eric are extremely grateful for the outpouring of support that he has received from the McKinney community, as well as from citizens across the country. Unfortunately, this positive show of support has, and will always be, overshadowed by hatred, and those set on creating racial tensions in America. This includes the countless death threat calls and emails being made that are not being conveyed to the public.”

He said that the McKinney FOP will continue to support Eric and his family, and they are confident that when the incident is justly and unbiasedly investigated, the truth will be uncovered.

She said there were people seeking criminal charges against the officer.

Breitbart Texas was in McKinney after the pool party incident, and reported that Craig Ranch residents said their homes were being vandalized, and their lives were being threatened. They also said they were in deep fear that protestors, and those who trespassed at the pool party, will return and harm residents and/or further vandalize property. 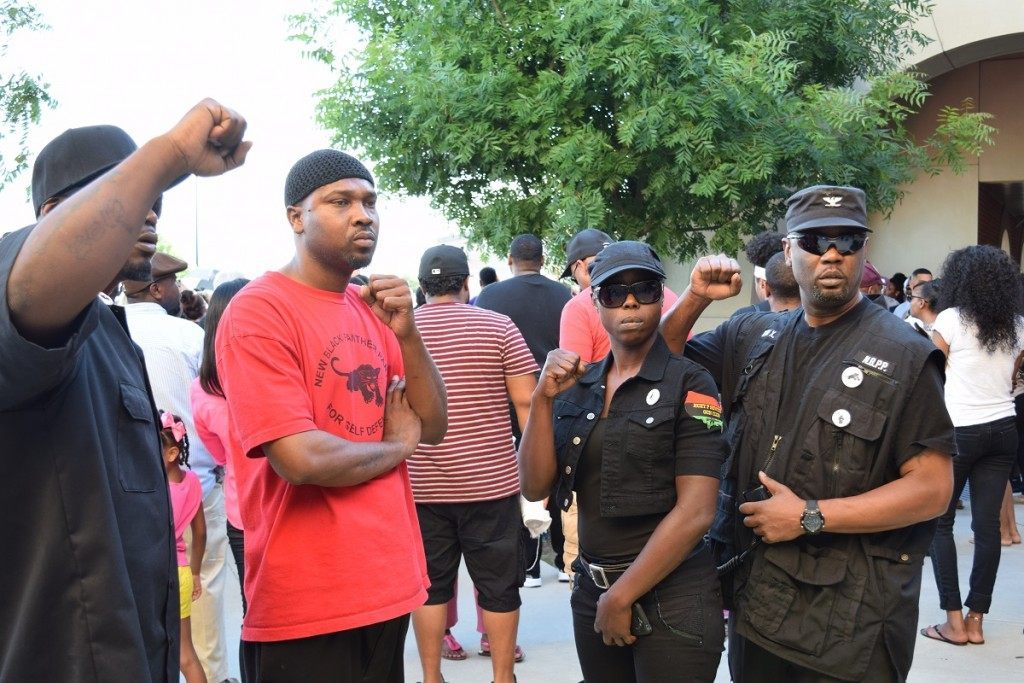 Craig Ranch residents told Breitbart Texas that vandalism and trespass had been an ongoing problem for weeks before the pool party. People had been coming from outside of the community into the subdivision and had vandalized homes and frightened neighbors. This behavior escalated after the pool party on Friday.

According to residents, one home had a brick thrown through a window on Saturday night, while several mothers told Breitbart Texas they have received death threats via Twitter. Several of the mothers say they have moved their children out of the neighborhood in fear of threatened violence. One man said that his wife left their home, and he stayed in their residence to defend their property.

Breitbart Texas reported on Sunday that McKinney resident Bryan Gestner posted on Facebook, “This was a Twitter party that turned into a mob event. Jumping pool fence. Assaulting 2 security guards, attacking a mother with three little girls. The video doesn’t show everything.”

Gestner continued saying the kids were drinking and “smoking weed” and they would not listen to any of the adults around the pool.

“This isn’t about race,” he continued. “This is about outside kids invading our neighborhood and had no respect for authority or the residents here. I have a target on my back now, and I have been threatened by these punks that they are gonna shoot up my house, when all I did was try to control the mob and actually tended to the girl and the boy that had a bloody lip.”

“Y’all don’t know the whole story,” Gestner continued. “I commend the officer for handling this situation.”

Over 500 people of mixed races, mostly black, protested at the Joyce Kelley Comstock Elementary School in McKinney. They marched through the Craig Ranch community subdivision. Protestors chanted “Black Lives Matter,” “Hands Up Don’t Shoot,” and “No Justice No Peace.”

One of the protestors wore a shirt that said “Fight back like Ferguson.” 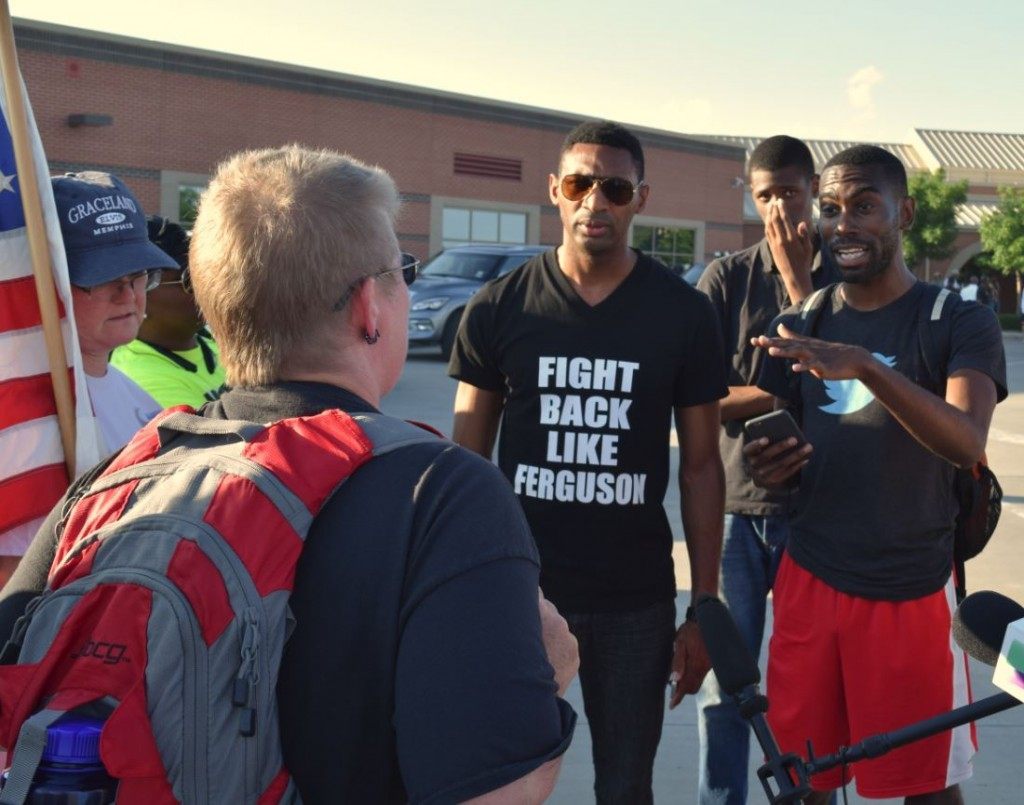 Breitbart Texas also reported that a black Dallas pastor, Rev. Ronald Wright, said, “We just passed an open weapons law in this state. We’re setting the stage for a terrorist attack in this country and the group’s not going to be ISIS, it’s going to be US-IS.”

Wright continued, “Us against these injustice law officers and people continuing to allow racism to go into this city.”

Another speaker threatened to bring the Nation of Islam’s volatile spiritual leader Louis Farrakhan into the City.

Rev. Wright, the Executive Director of Justice Seekers, wanted the mayor of McKinney to handle the situation by firing Casebolt and filing charges against him. Wright also said his group contacted the U.S. Justice Department to have them monitor the situation.

Dallas-based Next Generation Action Network founder Dominique Alexander said Casebolt “was very violent” and accused the officer of having a defensive military background and being in need of serious psychiatric evaluation. He likened the officer to being in a jungle and the officer was trying to get every animal down. He said “We stand in solidarity with the community of McKinney, the local pastors. They have the NAACP and LULAC involved to “restore this community,” he added.

@DallasforChange is now asking for the firing of Tracey Carver-Allbriton, a bank or bank contract employee. She was somehow involved in the assault captured in a video and has been accused of saying racist things while at the pool. This website has posted photos of Allbriton’s young children, and is now seeking to identify a gentleman shown in the video with Casebolt. This man is apparently a neighbor at the pool who did not take any strong action during the event involving Becton and Casebolt. The thirst for revenge has not been quenched.

Though technically the protest on Monday night remained peaceful, this protest movement overall has been anything but peaceful.

Lana Shadwick is a contributing writer and legal analyst for Breitbart Texas. She has served the state as a prosecutor and as an associate judge. Follow her on Twitter@LanaShadwick2