A newly surfaced video shows a new level of savagery by Mexican drug cartel members, as they strap sticks of dynamite to a child and to one of their rivals, only to light the fuses and blow them up.

The video was initially published by the Mexican news agency Reforma, who leaked the video that Mexican authorities found in the cell phone of Heriberto “El Gringo” Acevedo Cardenas, a top commander with the fearsome Cartel Jalisco Nueva Generacion. Acevedo died in a firefight with authorities on March 23 along with three of his bodyguards, Mexico’s SinEmbargo.Mx reported.

The video shows a boy who appears to be in his pre-teenage years crying moments before his execution. The boy has his hands tied behind his back and has a stick of dynamite strapped to his neck. 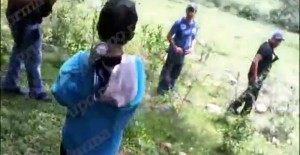 Cartel members strapped a stick of dynamite to a boy as part of a cartel execution.

Moments later, the video shows cartel members accosting a bound man wearing a black shirt, who also has a stick of dynamite tied around his neck.  The video then zooms out as the gunmen wait for the explosion, which they celebrate with cheers. 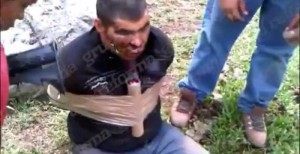 Cartel members with the CJNG strap a stick of dynamite to one of their rivals in order to kill him.

As previously reported by Breitbart Texas, the Cartel Jalisco Nueva Generacion is an offshoot of the Sinaloa Cartel which has since become a powerful independent organization. The CJNG made recent headlines for their brazen attacks against Mexican authorities, including a series of ambushes where they have killed multiple federal and state police officers.

The cartel also played a role in a recent firefight in and around Guadalajara Jalisco, where CJNG gunmen have been blamed for shooting down a Mexican army helicopter filled with Mexican Special Forces soldiers.