WALLER COUNTY, Texas — Breitbart Texas was at the Waller County Sheriff’s Office county jail Saturday evening when a protester told reporters and others present, that all white people should be killed. She also called white people and reporters, “terrorists.” Her orders – “go back into the cave where you came from.”

As reported by Breitbart Texas, the group Anonymous posted a YouTube video and made threatening demands upon the Waller County Sheriff’s Department and Waller County officials saying, “We all know where you live. No mercy for murderers.”

“You see this nappy-ass hair on my head? … That means I am one of those more militant Negroes,” a protester later identified as “Sunshine” said.

She told reporters she was at the protest because “these redneck mother-f**kers murdered Sandra Bland because she had nappy hair like me.”

The protester, aka “Sunshine,” was live-streaming the protest and her verbal assaults on journalists and photographers. She posted on her @ClaimMalcolmDay Twitter page – “I’m broadcasting ‘F**KWHITESUPREMACY’ live on @Ustream.”

“Sunshine” as she is referred to, describes herself on her @LOLatWhiteFear Twitter page as “The noncompliant negro female formerly known as @stylistsunshine founder of #CMXD campaign. 1 of the organizers of #Fergusonspring.” 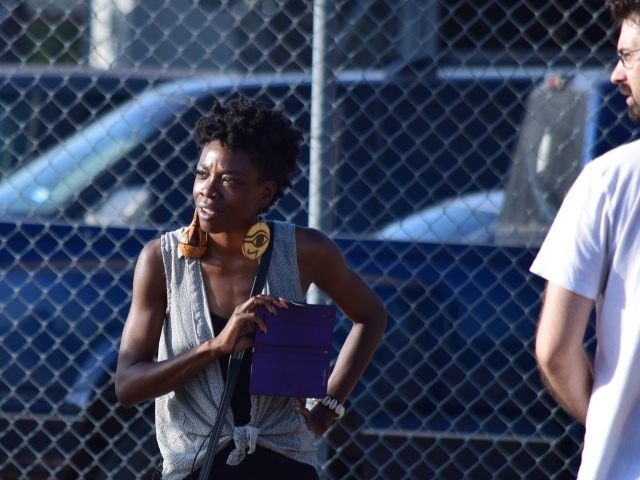 #CMXD or @ClaimMalcolmDay states on the Twitter page, “This year we give Malcolm X a national holiday. We are not asking, we are TAKING it!”

After saying she was a follower of Malcom X, Breitbart Texas asked “Sunshine” if she agreed that all white people should be killed. She retorted, “You’re damn right I do! You think I am scared to say that to you?!”

Breitbart Texas caught this on video, and Sunshine said she was recording this on her live stream.

She continued, “You mother-f**ckers thought we should be killed when ya’ll came and stole us from Africa and put us in chains and murdered us for over 400 years, so yeah, you do need to die. I think everybody else on the planet would have peace when you’re dead.”

Prior to the video being recorded by Breitbart Texas, “Sunshine” told Price that she was a follower of Malcolm X. Sunshine apparently is #CMXD or @ClaimMalcolmDay because “CMXD” posted that “I’m broadcasting ‘F**KWHITESUPREMACY.”

This protester verbally assaulted Breitbart Texas journalists and other journalists, bloggers, and photographers while at the protest. All of the victims of her verbal tirade were white.

“Sunshine” called white people and reporters “terrorists” and said she didn’t “negotiate with terrorists” when reporters asked her questions.

“I think you should go back to those caves that you crawled out of in the Caucasus mountains because you can’t leave black and brown people alone. We can’t have any peace on the planet because of white supremacy and white existence. So yeah, f**king die or go back to the cave. I’m not scared to say it.”

The Caucasus mountains is a mountain system in Eurasia.

She said she was at the jail just two weeks ago when “Sheriff Glenn Smith told me that she sat down on a toilet and that is how she f**ing died. That is not what they said on CNN. I will release the video to ya’ll.”

She said, “they” have continued to change “their story,” have told story after story, and come up with something different each time.

A young white man at the protest told her that he had a Black friend, his best friend, and his friend was there.

Before Sunshine left the area where reporters were gathered she said, Waller County is “white-supremacy at its finest.”

Neighbors told Breitbart Texas there was nothing racist about the county.

Lana Shadwick is a contributing writer and legal analyst for Breitbart Texas. She has served as a prosecutor and associate judge in Texas. Follow her on Twitter@LanaShadwick2.