HOUSTON, Texas – A thin blue line of police supporters stretched for over a mile along a Texas highway on Saturday as over 8,000 Texans took to the streets. The marchers gathered in the #PoliceLivesMatter parade in memory of murdered Harris County Sheriff’s Deputy Darren Goforth and in support of all police. 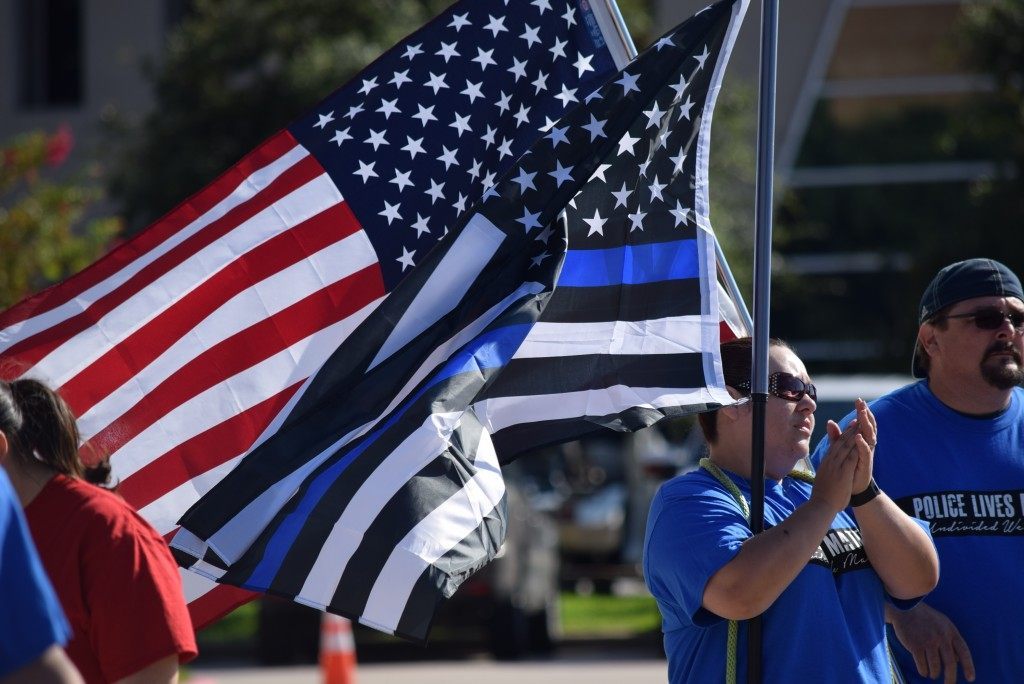 “Enough is enough,” said David Sherrod, a Houston businessman and one of the event’s organizers. “You aren’t going to execute cops in Houston. We won’t stand for it.” 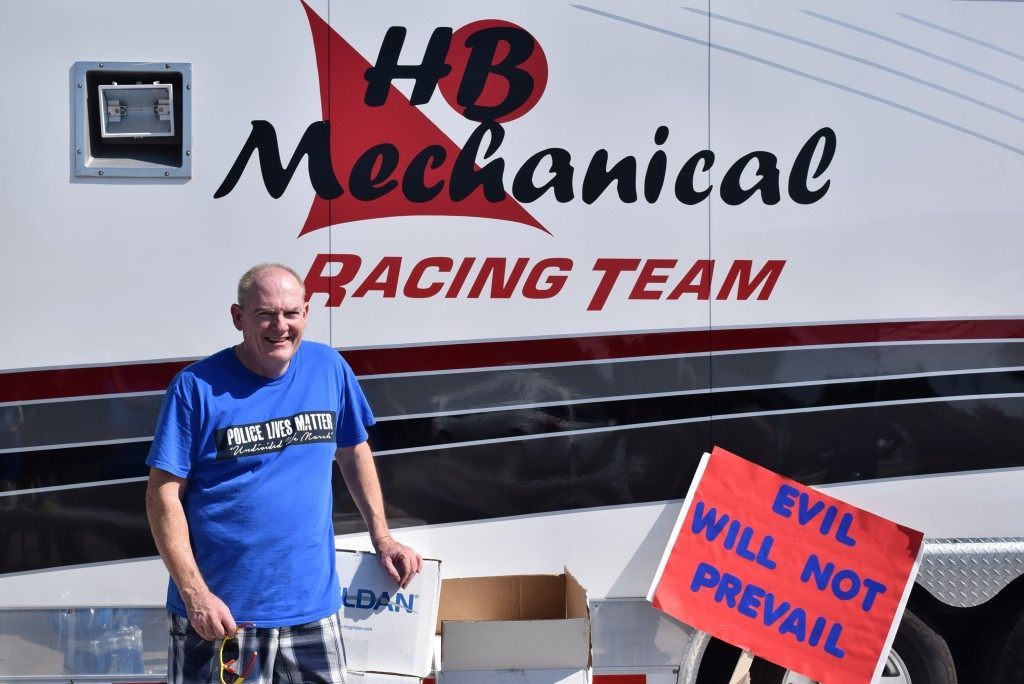 Sherrod said the idea for the march began when he and a few friends were discussing a way to make a statement after the murder of Deputy Goforth. “We planned on getting a few hundred people to march down Allen Parkway to City Hall,” Sherrod explained.

“The next thing we knew,” he said, “thousands were posting on Facebook that they wanted to join in. We decided to get a bigger venue and moved the march to this highway.” The large group of supporters marched along a 4.5 mile section of the Sam Houston Parkway. Police closed off the feeder roads to make room for the marchers and to ensure safety. 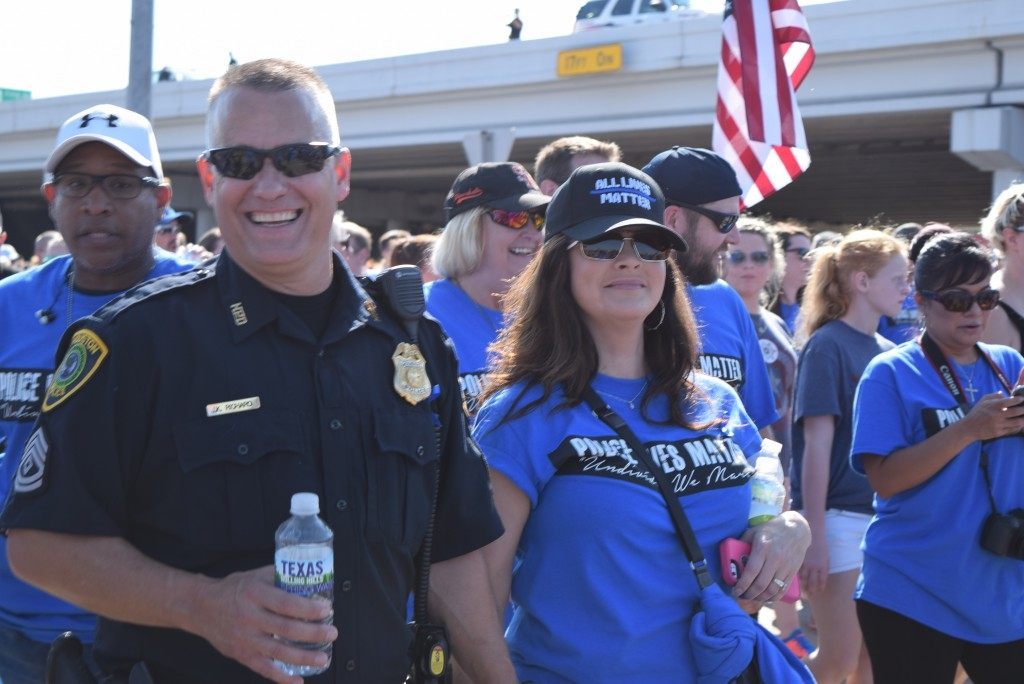 Today, over 8.000 people showed up, based on the number of blue shirts we have given away,” Sherrod said. “I have never seen anything like this response, but then, we are Texans and we don’t stand for our cops being murdered.”

Marchers began gathering about 8:30 a.m. on Houston’s northwest side for the march that wouldn’t kick off until 10:00. The moment finally came and the crowd joined in prayer, the Pledge of Allegiance and the National anthem. They heard from some police officers and other organizers and radio personalities and then it began. 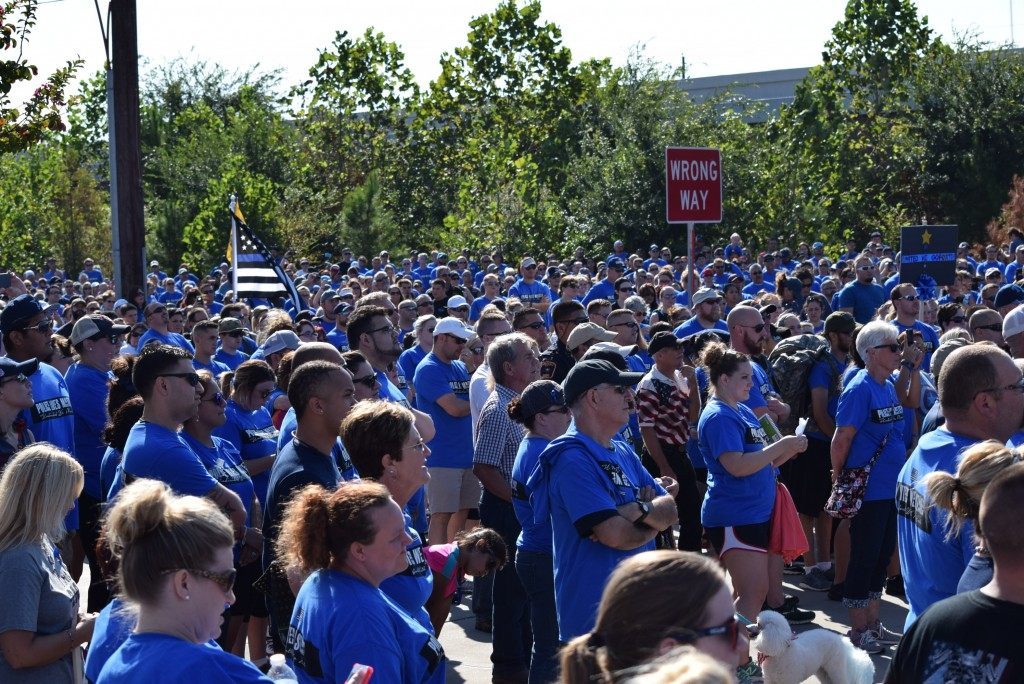 The crowd’s voice was suddenly drowned out by the rumble of hundreds of motorcycles whose riders had come to join in the march. They led off the parade and were followed by another long train of jeeps, trucks and other SUV’s carrying flags and “Thin Blue Line” flags, banners and signs. 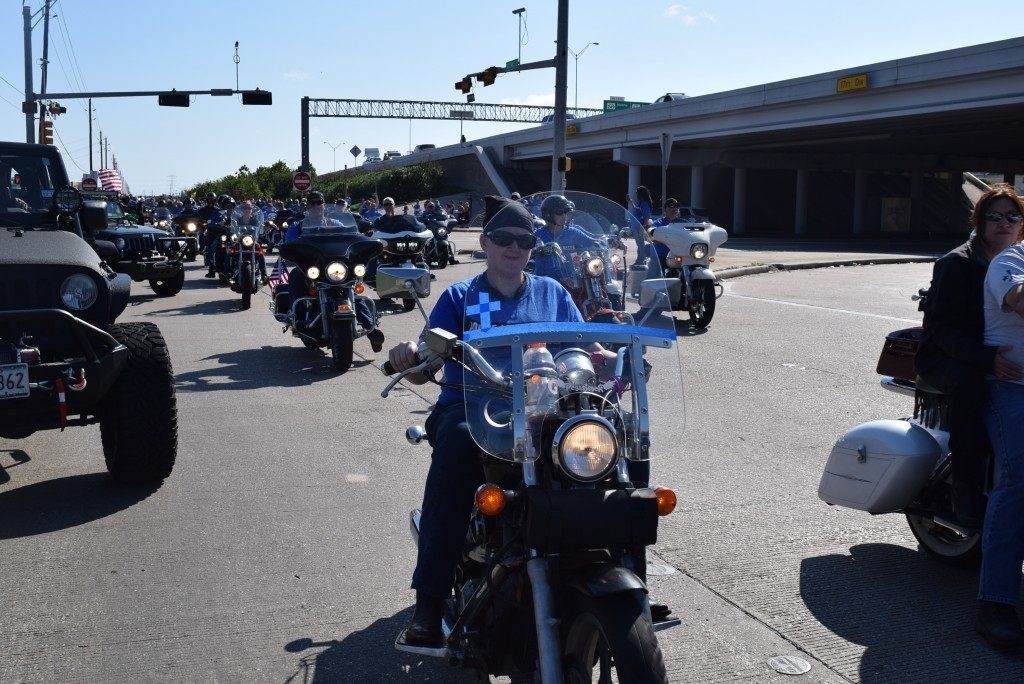 Then came the sea of blue shirts that said “Police Lives Matter” on the front and “United We Stand – Goforth with No Hate” on the back. The blue army of 8,000 men, women, children, and dogs, began marching west along the tollway feeder for their march that would continue for four and one-half miles. 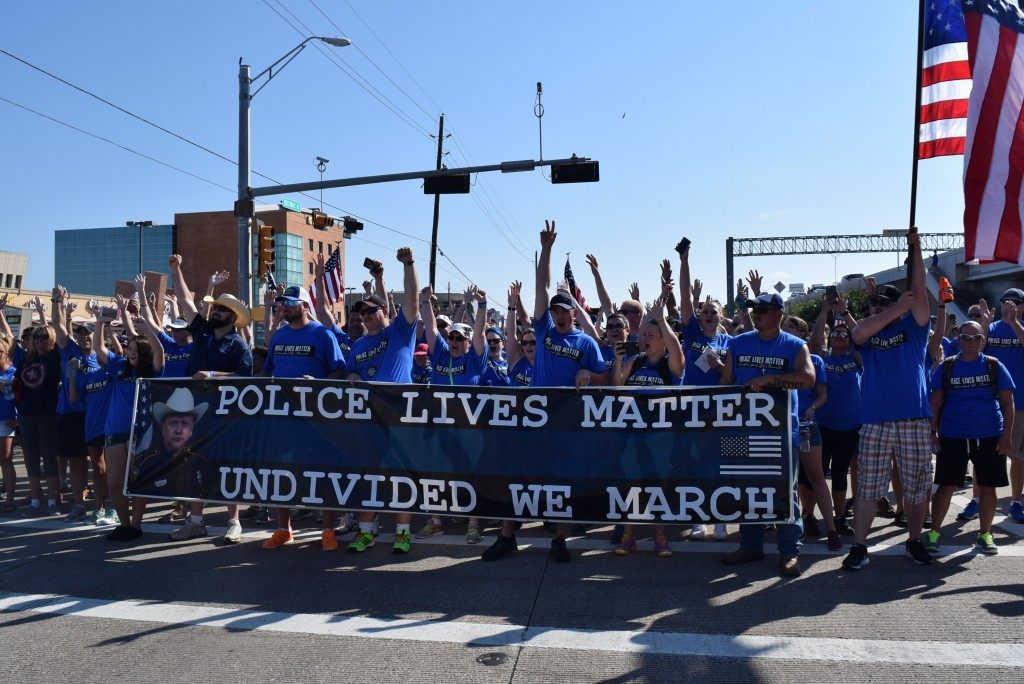 The 8,000 man army of blue begins its march on the Sam Houston Parkway in Houston. (Photo: Breitbart Texas/Bob Price)

People of all races and colors, from all walks of life, came out to show their support. Most wore the blue shirts that were being given away, but many came wearing Captain America shirts. 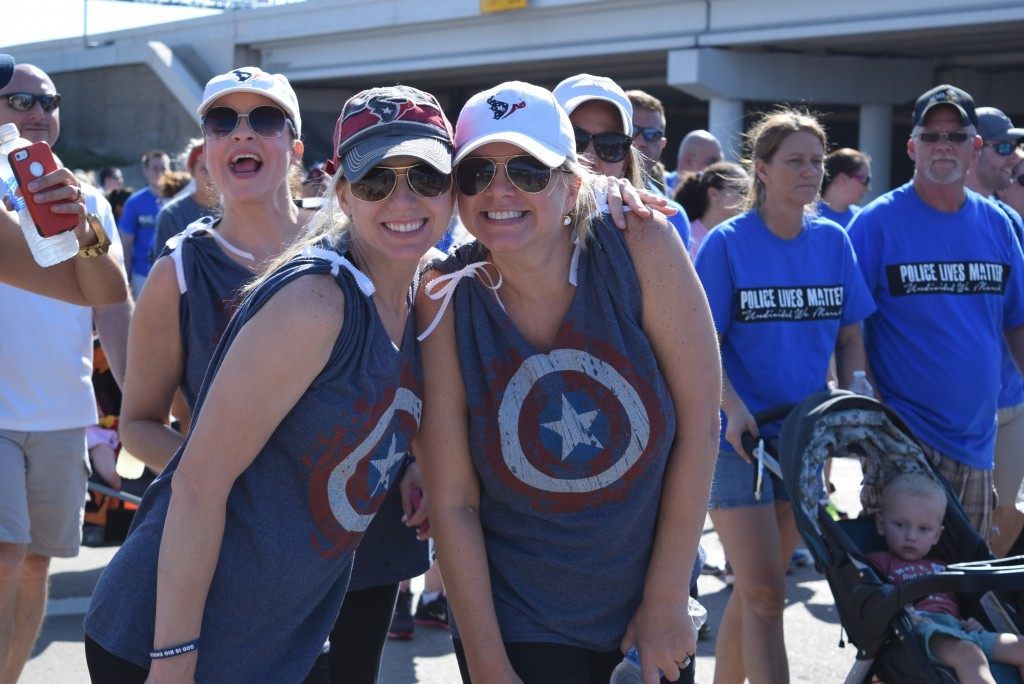 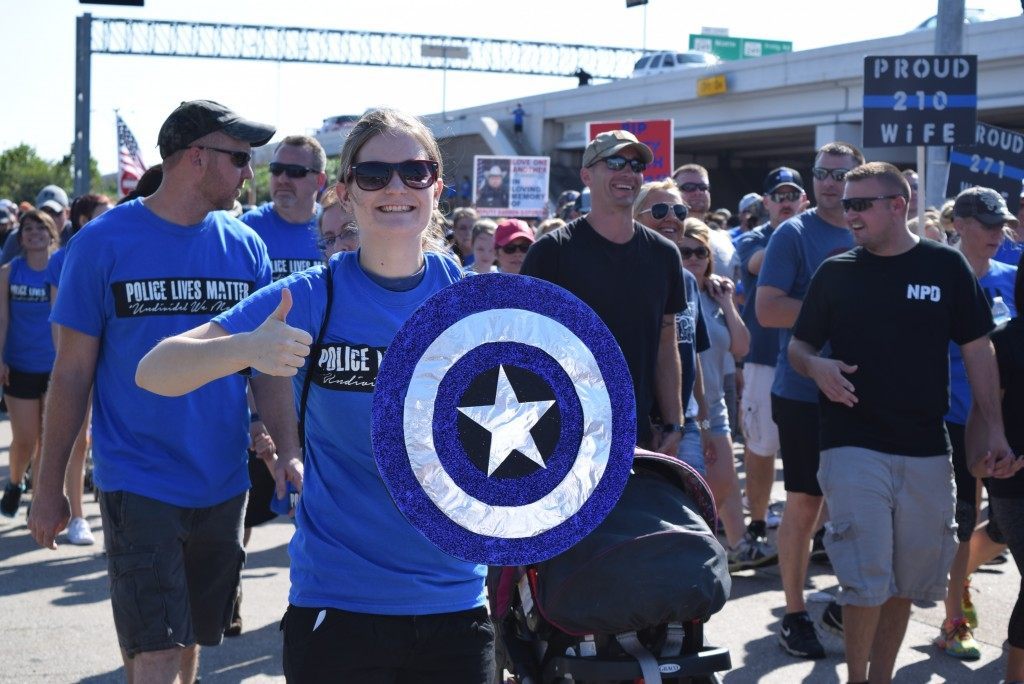 Dozens of marchers donned the Captain America colors to tell the Goforth family he is not forgotten. 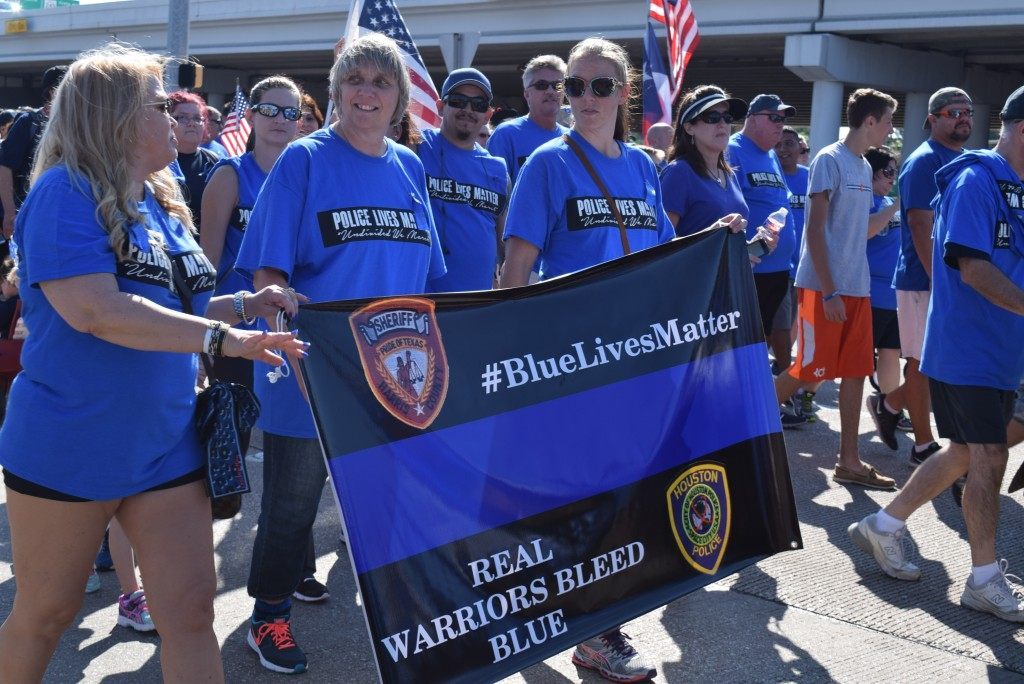 Other events are planned for later in the day, as previously reported by Breitbart Texas.