Breitbart Texas traveled to the Mexican States of Tamaulipas and Coahuila to recruit citizen journalists willing to risk their lives and expose the cartels silencing their communities.  The writers would face certain death at the hands of the various cartels that operate in those areas including the Gulf Cartel and Los Zetas if a pseudonym were not used. Breitbart Texas’ Cartel Chronicles are published in both English and in their original Spanish. This article was written by “AC Del Angel” from Reynosa.

REYNOSA, Tamaulipas — Tensions continue to rise between in this border city after the recent tragic events that led to cartel gunmen forcing a military vehicle to crash and kill four innocent bystanders–including a four-month-old baby. Since that fatal encounter, Mexican authorities and cartel forces have clashed in this border city, further escalating the fear by residents who don’t know when the next shootout could take place. While authorities have made various arrests, at least one soldier ended up getting injured during the violent gun battles.

In an effort to further slander the Mexican military and other police forces , the Gulf Cartel hoisted banners where the criminal organization’s leader called for an investigation into the military. On their side, the Mexican authorities have activated a series of operations aimed at capturing the leadership structure of the Gulf Cartel. The operations so far have resulted in various near misses and some minor arrests. The operations have become known in this border city as “Situations of Risk” or “SDR,” where citizens take to social media to warn each other about high speed pursuits to large scale gun-battles in residential areas or highly traveled main avenues.

On rare occasions the Reynosa municipal government also uses social media to release official information about the development of raging gun battles or chases. The city calls those violent situations “contingencies.” In recent days the reports of “contingencies” have been active as the city uses its “risk traffic lights which they use depending on the severity of the crisis.

Just last Friday, one of the main roadways in this city, Boulevard Hidalgo, was the stage of a high speed chase and a shootout when Mexican military soldiers tried to stop several SUV’s filled with gunmen that were traveling near the Valle Alto neighborhood. Rather than pull-over, the gunmen in the SUV’s began firing various machine guns at the Mexican soldiers injuring one during the clash.

The high speed chase ended at a motel where one of the SUV’s ended up crashing. The soldiers were able to arrest several gunmen and seize their weapon while other police forces combed the area searching for other gunmen. Mexican authorities later confirmed that they had arrested a low level cell leader within the Gulf Cartel but they did not release any official information about the number of casualties. 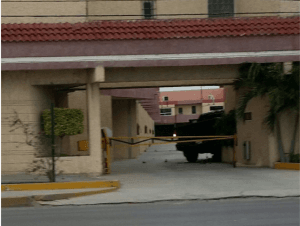 Boulevard Hidalgo, which is one of the most traveled avenues in this city, has been the scene of numerous shootouts during the past five years. The avenue leads to multiple entry points for rural dirt roads known as “brechas” which allow cartel members to move along rural areas where they operate away from prying eyes. Through “brechas” cartel smugglers and gunmen are able to move to and from their hideouts and crossing points without being spotted. One of their main operation areas is commonly known as “La Riberena which is the region near a highway that follows the Rio Grande west towards Laredo. This area is the Gulf Cartels main crossing point and area of operation.