The meeting of the Texas House State Affairs Committee was called by Chairman Byron Cook (R-Corsicana) in response to the interim charge of House Speaker Joe Straus (R-San Antonio).

The meeting notice posted by the House committee said the object of the meeting was to “Examine state and local laws applicable to undocumented immigrants throughout the State of Texas and analyze the effects of those laws in conjunction with federal immigration laws and the policies and practices followed by U.S. Immigration and Customs Enforcement.”

At one point Representative Geren reminded the chairman that the House had passed an anti-sanctuary city bill several sessions ago. The bill he referenced, 82(R) HB 12, passed the House by a party-line vote of 100-47. The bill died in the Senate when a two-thirds vote could not be sustained to bring the bill to the floor for a vote. The Senate changed the two-thirds rule to 60 percent during the 2015 legislative session. 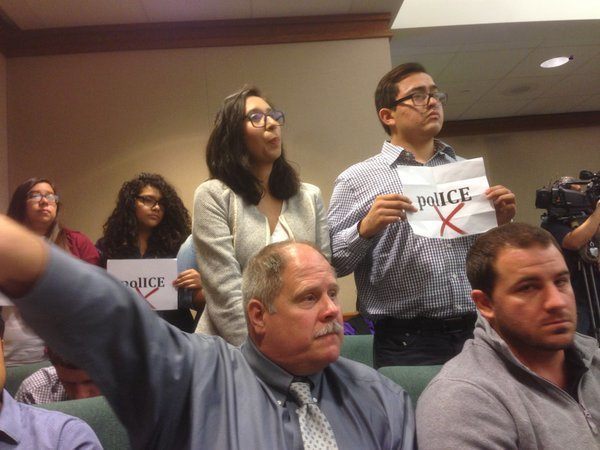 As reported earlier by Breitbart Texas, the committee only heard testimony from invited speakers. This restriction brought strong criticism from grassroots leaders from across the state.

DPS Director Steve McCraw testified about the negative impact of a law passed by the 2015 Texas Legislature. That law, HB 1888, restricts the type of fingerprinting the department can do during an application for a driver’s license or identification card. The law was changed to restrict the recording of a thumbprint only. If the thumbprint cannot be taken, the index finger is to be used instead. The department is required to delete the 10-digit fingerprints they have on file.

“We lost an important tool,” McCraw testified. “There’s no question about it.”

Tarrant County Sheriff Dee Anderson commended Texas Governor Greg Abbott on his initiatives to address the problem. He said tight budgets in smaller counties force these counties to release prisoners and this is a big problem. He said county commissioners put pressure on their sheriffs to keep jail costs down, giving prisoners a “get out of jail free card” when they bond out and don’t come back. This is true even when there is a detainer on them, he said. The term “detainer” refers to a hold placed on an illegal alien by the Immigration and Customs Enforcement (ICE) agency.

The Fort Worth area sheriff said it was the responsibility of all to secure the border and he urged several times that anything that can be done on the federal and state level to address the problem caused by illegal aliens is welcome by law enforcement, including financial help, laws, additional policies, and other legislative solutions.

Sheriff Anderson suggested a five year automatic prison sentence if a person is deported but they return. Many of the witnesses testified that once deported, criminal aliens return because the border is porous.

Don Lee, Director of the Texas Conference of Urban Counties said that mandamus authority would be an effective tool. He said it was not his place to say whether cities qualify as a sanctuary city jurisdiction. The director of the non-profit organization comprised of 38 member counties said withholding grant money as ordered by Texas Governor Greg Abbott is also a tool that can be utilized. The organization represents approximately 80 percent of the state’s population and exists to support and coordinate communications among member counties.

Jackson County Sheriff Aj (Andy) Louderback said, “This is about criminality. This is about how we handle criminal aliens in the state of Texas.” He said what was needed was a uniform policy, not “the policy of the day.” He said that all 254 sheriffs need to be on the same page.

Chairman Cook told the sheriffs’ legislative chairman that the sheriffs “need to lock yourselves in a room” and come back with what they need. Cook said, “We need help from you to navigate this.”

Dallas County Sheriff Lupe Valdez, “I have trouble defining ‘sanctuary cities.’” Appearing to walk back her prior statement that she would only honor ICE detainers on a case-by-case basis, the Dallas sheriff said that the rumor that she is denying ICE detainers has spread with the assistance of “cow manure.” The “rumor” was actually her interview with the Dallas Morning News where she announced the policy that many said confirmed Dallas as a sanctuary city. Breitbart Texas reported on her announcement.

Valdez said she has not refused to cooperate with a single ICE detainer. However, her newly announced policy prompted a strong reaction from Governor Abbott who declared that sanctuary city policies will “no longer be tolerated in Texas,” Breitbart Texas reported.

Valdez talked a great deal about the budgetary restraints in her county saying they would need a new jail and additional employees. She said the employees would cost approximately $6 million a year.

She also argued in apparent support of illegal immigration by saying illegal immigrants pay over a billion dollars in sales tax, and claimed that they do not commit crimes disproportionately to citizens. She says she has a problem with “stopping targeted groups.” She talked about workers and their employers that would be hurt, including construction workers and oil workers.

Valdez said that ICE is short-handed and there is no such thing as “ICE on demand.” She said there are 50,000 arrests in her county every year.

Terrell County Sheriff Clint McDonald is the Chairman of the Texas Border Sheriffs Association. His county is located just miles from the Texas-Mexico border. He said that when ICE says they are acting, they are doing so “on the backs of our taxpayers.” He gave an example where after committing over 30 burglaries, eight illegal aliens eventually plead out and they were removed but only after it cost the county millions of dollars. He said the sheriffs have been to Washington, D.C., and the federal government is not interested in securing our borders. He said the border is wide open.

Jackson County Sheriff Louderback said we are here to follow the rule of law. The detainer process is not a simple process. He said the sheriffs attempt to follow the guidelines to the letter of the law. “We are doing the best we can,” the sheriff said. “We are not fans of the PEP. It lets tens of thousands of criminal aliens lose.”

Louderback said the PEP is a very complex program. “It would take a 2 hour presentation to discuss PEP and what it brings to bear on how we handle criminal aliens.”

As reported by Breitbart Texas, grassroots leaders were skeptical whether anything substantive would come from the committee meetings. They charged that Republicans use the topic of sanctuary cities to campaign on, but urged they want these problems to be solved. They urge that sanctuary cities must be ended because the polities create danger for communities.

In advance of the hearing, Mary and Dale Huls of the Clear Lake Tea Party charged that the “hearing simply kicks the can down the road.”

Jim Gibson, media liason for Texas Border Volunteers talked about the problems created by sanctuary city policies. “By not working with ICE and thus permitting illegal aliens to find refuge, these public servants are rewriting federal law as they see fit. Surely, with the technology available today, an effective working relationship between local, state, and federal law enforcement agencies can be established to identify and deport those that have knowingly violated our immigration laws.”

Lana Shadwick is a contributing writer and legal analyst for Breitbart Texas. She has served as an associate judge and prosecutor. Follow her on Twitter @LanaShadwick2.