As Mexico continues to plunge in a downward spiral of violence, a video leaked to some Mexican news outlets as well as Breitbart Texas, shows military and police personnel interrogating a suspected cartel member. The following video was leaked without information about location or events leading to the interrogation.

The video begins with a sitting woman that has her head covered with a yellow cloth. The sobbing woman is approached by a woman wearing a Mexican military uniform and another woman wearing a Mexican federal police uniform. The female soldier taps her rifle to make a sound similar to the sound of a weapon being chambered and then she places the barrel of the rifle on the hooded woman’s head. 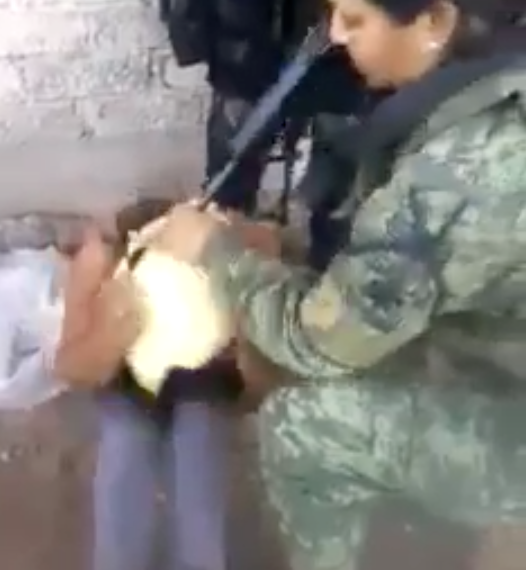 The female soldier then steps back as the police woman steps forward, removes the yellow cloth and pulls her hair back. The police woman the uses a clear trash bag to wrap the head of the suspected cartel woman. Almost immediately, the cartel woman begins to kick and moan as she struggles to breathe. Once the cop takes the bag off, her and the soldier begin to ask her questions and demanded information about what she knew. Since the woman refuses to answer the police woman uses the bag once more in an effort to get information about her associates. 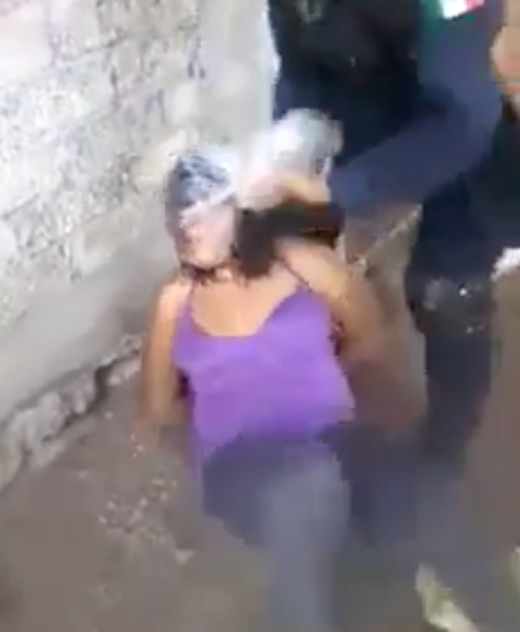 The aggressive actions by Mexican authorities come after years of battling terroristic criminal organizations responsible for unspeakable atrocities to the people of Mexico. Unlike Mexican authorities, cartel members are not tied by any rules of engagement and are not above murdering entire families. The lack of rules of engagement by cartel members has resulted in multiple children being shot or killed during gun battles where cartel gunmen indiscriminately fire their weapons in city streets.

Atrocities by cartel members do not end in firefights, Breitbart Texas recently reported on how from 2011 to 2013 Los Zetas drug cartel systematically exterminated and incinerated close to 400 innocent people from the northern towns of Coahuila. Approximately 150 of those bodies were incinerated inside the prison in the border city of Piedras Negras, Coahuila using 55 gallon drums. Other bodies were incinerated in nearby ranches with actual ovens after which Los Zetas dispersed the ashes in order to destroy any evidence. The criminal organization was able to operate with complete impunity thanks to the complicity of state government officials.

Most recently Mexican authorities uncovered a gravesite belonging to the Gulf Cartel near the border city of Matamoros, Tamaulipas where human remains were incinerated using 55-gallon drums like in Coahuila. Breitbart Texas spoke with a former cartel member who provided specific details about the atrocities that took place in that spot. In response to the discovery of the gravesite, the Tamaulipas government issued out a public statement claiming that the area was not a gravesite and authorities could not tell if the bones found at the location belonged to humans or animals. Like in Coahuila, the Tamaulipas government has a long history of cooperating with drug cartels. Breitbart Texas previously reported that Tomas Yarrington and Eugenio Hernandez, two former governors from Tamaulipas are current fugitives of the U.S. Department of Justice for their alleged ties to Mexican drug cartels. The two governors have been charged with money laundering, while Yarrington has also been charged with drug conspiracy charges.