Officers with the U.S. Customs and Border Protection Service (CBP) seized $7.4 million in marijuana that was discovered at a commercial facility in southern Arizona. Separately, officers seized nearly $800,000 in hard drugs at border crossings.

The CBP officers were alerted to the presence of the marijuana by a K-9 officer during the inspection of a load of watermelons, information provided to Breitbart Texasd by the CBP revealed. The drugs were in a tractor-trailer driven by a 51-year-old Mexican national from Nogales, Sonora, Mexico.

The shipment of watermelons was used to camouflage 14,800 pounds of marijuana. This load of marijuana was estimated to be worth about $7.4 million in cash flow to the narcotics traffickers. 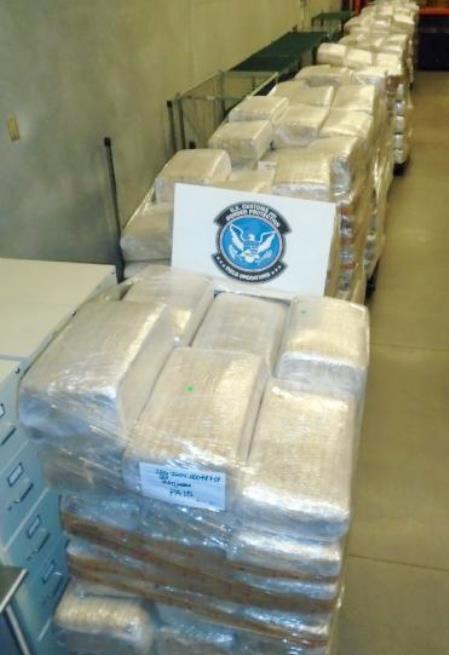 The seizure occurred on April 21, officials said, during an inspection of the Mariposa Commercial Facility in Nogales, Arizona.

This discovery followed the previous days seizure of  about $793,000 in hard drugs that were seized at the Port of Nogales.

CBP officers arrested two Mexican nationals and a Honduran national as they attempted to smuggle 100 pounds of cocaine and methamphetamine into the United States in three separate arrests, according to a statement from CBP officials obtained by Breitbart Texas.

In the first incident, a 44-year-old unidentified Mexican national was driving his Volkswagen through the Mariposa border crossing. The vehicle was ordered to a secondary inspection station where officers discovered almost 20 pounds of cocaine in the rear speaker area of the vehicle. This cocaine was estimated to be valued at almost $223,000.

Shortly after that, officers working the Dennis DeConcini border crossing sent a 66-year-old Honduran woman to a secondary inspection station. A search of her Pontiac sedan revealed a stash of cocaine and methamphetamine in the vehicle’s rear door. Officers seized 24 pounds of cocaine and 40 pounds of methamphetamine. The combined value of this drug seizure was estimated to be nearly $400,000.

Later that afternoon, agents arrested a 25-year-old Mexican male when a K-9 officer alerted to the presence of drugs in his vehicle. A search of the vehicle’s drive shaft area revealed 16 pounds of cocaine valued at nearly $200,000.