A student who is an illegal immigrant has received a great deal of pushback for bragging about getting an all tuition paid free ride to the University of Texas.

She not only took to Twitter to blow her own horn about her self-accessed “nice legs” and her “13 cords/medals,” “4.5GPA” and Valedictorian status at Crockett High School, she also had to add, “oh and I’m undocumented.”

Mayte Lara attended Crockett High School in Austin, Texas, which is named after David “Davy” Crockett. Crockett of course died during the Battle of the Alamo fighting Santa Anna’s Mexican army for independence during the Texas Revolution.

The thought of an illegal immigrant having a full ride to the University, and presumably on taxpayer dollars, has Texans and others seeing red. The Daily Mail.com and other publications have noted the firestorm and recorded her original tweet: 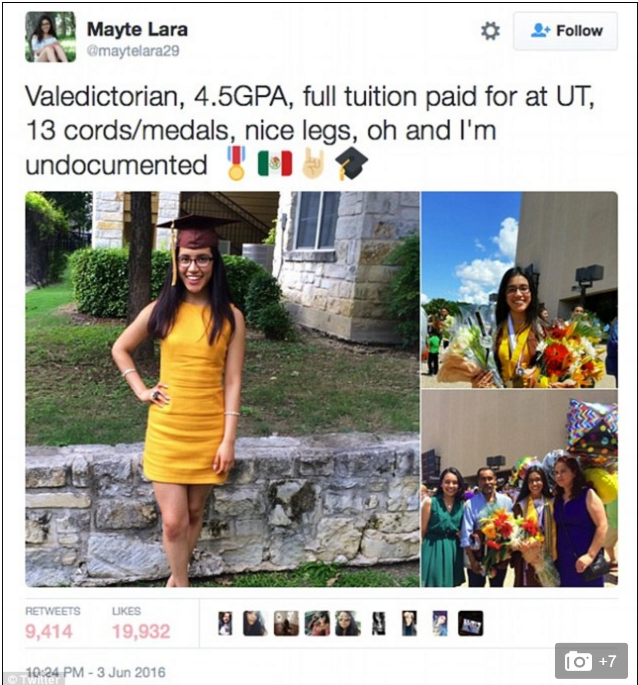 Another tweeted at her to “go back to your home country and try again legally.”

@maytelara29 go back to your home country and try again legally

He said what many Texans were expressing and urged “@UTAustin revoke her scholarship.” He added, “no free rides for illegals.”

@UTAustin revoke her scholarship @maytelara29 no free rides for illegals

Another expressed, “I did it legally, nobody should get a short cut.”

@maytelara29 I did it legally, nobody should get a short cut. pic.twitter.com/UZC5ipnqNY

@4TheTruth2012 tweeted what many expressed, “You can add criminal to your accomplishments!” He added a screenshot from a section from AllLaw asking “Is it a Crime to Enter the U.S. Illegally?”

@maytelara29 You can add criminal to your accomplishments! May be book smart but u lack commonsense pic.twitter.com/KQf6WyHGkh

Another illegal immigrant and recent graduate was apparently empowered by Lara’s tweet. He himself tweeted that he had received “$282,220 in awarded scholarships” and boasted, “I’m also undocumented.” He stated he was going to be a 2020 graduate of the University of Pennsylvania.

@1979amish @Nero @maytelara29 there are so many of them pic.twitter.com/vSSHmXD4Cw

Mayte Lara and Erik Vargas have apparently received so much push-back, they have both taken down their Twitter accounts @Mayelara29 and @Eh_Wick.

According to the Texas Higher Education Coordinating Board website, the 77th Texas Legislature granted certain non-immigrant students, including undocumented students, access to in-state tuition rates at Texas public institutions of higher education. It also allowed them access to state financial aid. To qualify, the illegal immigrant student must have resided in Texas for three years with a parent or guardian prior to graduating or receiving a GED. The student must have graduated from a public or private high school or received a GED in Texas. The student must also sign an affidavit indicating an intent to apply for permanent resident status as soon as they are able to do so.

An organization called “KeepHB1403.com” has a website that “supports tuition equality for undocumented students.” Their goal is to gather signatures and submit resolutions to the Texas Legislature. The organization targets unions, local businesses, and community organizations for help in signing “organizational resolution(s).”