The Mexican Los Zetas cartel controls portions of the Texas-Mexico border and has proven to possess Russian rocket-propelled grenade launchers and the grenades (RPGs). This is significant in that the Mexican transnational group has shown a willingness to fire upon U.S. aircraft, such as they did on June 5, 2015 in the Laredo Sector along the Texas border. Another significant consideration pertains to the group’s ability to smuggle persons, narcotics, or any other item they wish into the U.S.–for the right price. The RPGs could easily end up in the hands of someone or a group within the U.S.

The Los Zetas cartel having RPGs was revealed in a recent Breitbart Texas investigation into rival factions of the cartel using social media to taunt each other and to make threats. In that instance, we wrote, “In the most recent series of taunts, one faction of the Los Zetas cartel posted a photograph of what appears to be a Russian RGP-7 with the names of two rival commanders on written on the munitions.” 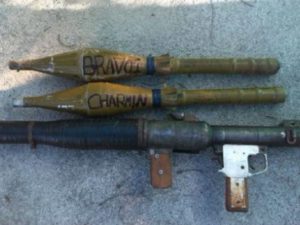 The cartel was shown to have possessed such weaponry in a prior instance, but this latest report indicates that the group possessing such threats to the U.S. was not an isolated threat. Breitbart Texas previously covered an attempt by Los Zetas to use a RPG to attack a Mexican governmental building. We wrote, “Gunmen suspected of being part of Los Zetas drug cartel fired an RPG at the headquarters of a special police unit in the border city of Piedras Negras, Coahuila; the rocket-propelled grenade did not explode. Piedras Negras is the sister city of Eagle Pass, Texas, and sits immediately across the border.”

The Los Zetas cartel has been engaging in a brutal civil war with various Los Zetas factions fighting each other, dismembering each other, and targeting each other’s families. Not only does their need for cash to fund this war increase the likelihood that they would sell such weaponry and smuggle the items into the U.S., but a prior comprehensive investigation by Breitbart Texas revealed the extent of such threats. We wrote:

While the various criminal organizations identifying as the Sinaloa Federation have retained older, more experienced and mature leadership, the Gulf cartel and the Zetas cartel have had their leadership decimated by assassinations and arrests. This has resulted in a younger breed of leaders engaged in nearly incessant infighting. These younger leaders, unlike their counterparts in the more professional Sinaloa Federation, are less concerned with long-term profits. They want money today, as evidenced by the recent unaccompanied minor crisis. In this matter, the Gulf cartel and the Zetas cartel chose the short-term profits from smuggling throngs of Central Americans into the U.S., even though this would inevitably result in increased attention to the border they control and increased an law enforcement presence. They chose today’s money over their long-term ability to continue making narco-profits. So short-sighted were groups within the Gulf cartel that they have resorted to common crimes to meet payroll after their human smuggling resulted in a decreased ability to get their narcotics loads into Texas.

This is significant in relation to international terrorism, including the group known as ISIS. While the Sinaloa Federation has not exhibited that they would accept a large profit for today while damaging their future profits, the Gulf cartel and the Zetas cartel have done so. An individual terrorist or a small group of terrorists providing a large sum of money for help entering the U.S. would not be appealing to the Sinaloa Federation, the group who controls the U.S.-Mexico border from west of the El Paso, Texas area all the way to the Mexican city of Tijuana.  They do not accept money and large profits for today if they know their ability to continue making long-term profits will be damaged. Thus, ISIS or other terrorists would likely be forced to work through the open Texas border between the Gulf of Mexico to somewhere before El Paso, Texas. The most promising area for them would be the Laredo Sector. A Laredo crossing provides a large city close to the border that isn’t considered to be in the border region: San Antonio, Texas. Crossing in the Rio Grande Valley Sector still leaves a gauntlet of federal and state agencies to get past before Houston or San Antonio. A Laredo crossing leaves less space to travel before making a large city outside of the border region and Texas leaders have not overwhelmed the area with State Troopers, as they have in the Rio Grande Valley Sector.

Unfortunately, the very region of the Texas-Mexico border controlled by Los Zetas happens to be the region our analysis deemed most likely to cross a foreign terrorist clandestinely into the U.S.–or a weapons system.

A U.S. Drug Enforcement Agency map detailed the regions within the U.S. that are controlled by Los Zetas or where the cartel has operational abilities.

A previous Breitbart Texas exclusive report proved that Los Zetas operates freely in the state of Texas and that local law enforcement officials attempt to downplay the risk that the transnational criminal group poses for Texans.

This writer has previously called upon U.S. authorities to declare Los Zetas as a foreign terrorist organization. To date, no U.S. or Texas officials have heeded the call.