Texas Department of Public Safety (DPS) Director, Colonel Steve McCraw, told a Texas House committee that only two of Texas’ fourteen border counties are under “operational control.” No Texas border counties have been raised to the highest security level of “substantial control.”

Colonel McCraw testified before a hearing hosted by the Texas House Appropriations Committee. The committee was looking at how the $800 million budgeted by the 2015 legislative session is being spent and what results are being achieved. It appears the results are still a work in progress.

McCraw told the committee he is not claiming success at this time, the Austin American-Statesman reported on Tuesday afternoon. He said the definition of success is changing as their goals and directives from the legislature change.

“Usually the rule is you just report seizure numbers, and as long as the seizure number comes up and arrests goes up, you ask for more money and you claim success,” McCraw told the committee. “What we’re saying here is that we’re not claiming success until you move up to the next level.”

Currently only Hidalgo and Starr Counties are listed as being under “operational control,” the DPS director testified. Operational control is the second highest level of security. The balance of Texas’ border counties fall under “minimal control” or are “unsecured.” The four security levels are defined in the graph below. 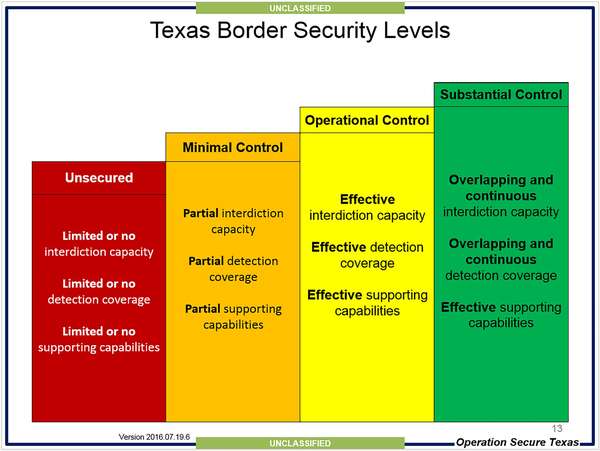 State Representative Donna Howard (D-Austin) told the director she appreciated the new security metrics and called them more useful from what has been previously supplied. “This is a huge step in the right direction,” Howard stated.

McCraw told the committee the new reports focus less on arrest and seizure statistics and more on equipment and manpower available to do the job.

Under the new system, the department will look at the deployment of technology tools that include cameras and sensors that monitor for border crossings or traffic through known smuggling routes. Law enforcement will compare the increased information available from the technology deployments to the time it takes law enforcement resources to respond to an area of alert.

While the efforts by the DPS in Hidalgo and Starr Counties have been effective in raising the security level, some of the smuggling traffic has simply been moved to other counties where less resources have been deployed. McCraw said those two counties were chosen for the first deployment of new resources because they had been the areas where the highest levels of trafficking had occurred in the past. “We’ve got to keep moving our zones out and maintaining what we have,” the director told the committee.

The Texas Legislature authorized the DPS to spend $800 million in border security over this year and next, Breitbart Texas previously reported. Included in the bill is an authorization to hire an additional 250 DPS troopers. The bill also provided for additional equipment, technology and training to enhance border security along the Texas/Mexico border.

In order to avoid flooding the border region with rookie troopers, the state is still having to supplement border security with troopers on temporary assignment from around the state. The movement of these personnel from their primary assignment area to the border does come with some risk of lessened public safety in their home communities while they are out of the area, McCraw confirmed.

State Representative Helen Giddings (D-DeSoto) took a dim view of this, the Texas Tribune reported. McCraw told Giddings his agency was responding to “very direct guidance in terms of prioritization” from the legislature. The Democrat Representative responded that voters might have a problem supporting the border surge if the cost is decreased security in their home areas.

Currently 90 DPS troopers have completed training. That number will increase to 204 following the next DPS Academy graduation in August. The State expects the 250 number to be reached by December. Not all of these troopers are assigned to the border region. Some are used to fill in for troopers who have retired or left the department for other reasons. Also, some of the new troopers are assigned to other areas to help balance the experience level along the border.