A group of local Cleveland anarchists participating in the protests against the 2016 Republican Convention and police had a an individual in the group with a tattoo supporting an group that the FBI has declared as a terrorist organization. The group, known as “ALF,” or the Animal Liberation Front, has used arson and economic sabotage to terrorize businesses and individuals who do not extend the same rights to animals that are extended to human beings. (Disclosure: This author previously worked undercover with the FBI on investigations that may have involved the Animal Liberation Front discussed in this article.)

The protester with the tattoo was a female and the tattoo was on the back of her calf. Though the legs in the image appear to be those of a man due to the amount of hair on the legs, they belong to a female–as it is trendy in anarchist subculture for women to look like men and grow hair under their arms and on their legs without any effort to groom them. The tattoo is slightly difficult to see due to what seemed to be a layer of dirt or some sort of film on the skin from that subculture’s tendency to avoid bathing. The tattoo is one of the logos for the terror group. 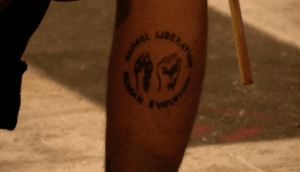 Th woman with the tattoo was working with a local Cleveland anarchist group called “Cop Block.” The group could be seen attempting to harass law enforcement officers around Cleveland during the Republican National Convention. Below are images of the woman with the terror tattoo. 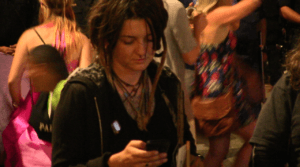 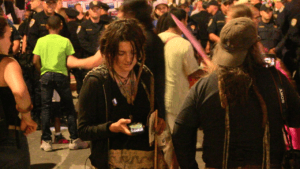 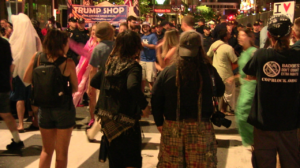 The FBI discusses the ALF in detail during 2004 testimony to the Senate Judiciary Committee:

During the past decade we have witnessed dramatic changes in the nature of the domestic terrorist threat. In the 1990s, right-wing extremism overtook left-wing terrorism as the most dangerous domestic terrorist threat to the United States. During the past several years, however, special interest extremism, as characterized by the Animal Liberation Front (ALF), the Earth Liberation Front (ELF), and related extremists, has emerged as a serious domestic terrorist threat. Special interest terrorism differs from traditional right-wing and left-wing terrorism in that extremist special interest groups seek to resolve specific issues, rather than effect widespread political change. Such extremists conduct acts of politically motivated violence to force segments of society, including the general public, to change attitudes about issues considered important to the extremists’ causes. Generally, extremist groups engage in much activity that is protected by constitutional guarantees of free speech and assembly. Law enforcement only becomes involved when the volatile talk of these groups transgresses into unlawful action. The FBI estimates that the ALF/ELF and related groups have committed more than 1,100 criminal acts in the United States since 1976, resulting in damages conservatively estimated at approximately $110 million.

The ALF, established in Great Britain in the mid-1970s, is a loosely organized extremist movement committed to ending the abuse and exploitation of animals. The American branch of the ALF began its operations in the late 1970s. Individuals become members of the ALF not by filing paperwork or paying dues, but simply by engaging in “direct action” against companies or individuals who, in their view, utilize animals for research or economic gain, or do some manner of business with those companies or individuals. “Direct action” generally occurs in the form of criminal activity designed to cause economic loss or to destroy the victims’ company operations or property. The extremists’ efforts have broadened to include a multi-national campaign of harassment, intimidation and coercion against animal testing companies and any companies or individuals doing business with those targeted companies. Huntingdon Life Sciences (HLS) is one such company. The “secondary” or “tertiary” targeting of companies which have business or financial relationships with the target company typically takes the form of fanatical harassment of employees and interference with normal business operations, under the threat of escalating tactics or even violence. The harassment is designed to inflict increasing economic damage until the company is forced to cancel its contracts or business relationship with the original target. Internationally, the best example of this trend involves Great Britain’s Stop Huntingdon Animal Cruelty (SHAC) organization, a more organized sub-group within the extremist animal rights movement. SHAC has targeted the animal testing company HLS and any companies with which HLS conducts business. While the SHAC organization attempts to portray itself as an information service or even a media outlet, it is closely aligned with the ALF and its pattern of criminal activities – many of which are taken against companies and individuals selected as targets by SHAC and posted on SHAC’s Internet website.