An earthquake measuring 5.6 on the Richter scale struck near Pawnee, Oklahoma on Saturday morning causing minor damage. The quake was felt as far away as Chicago.

Officials are quickly assessing potential damage, but so far only one historical building has been reported as damaged. The 100-year-old building is said to be standing but some of the sandstone fascia fell from the building.

The Oklahoma Corporation Commission is examining the state’s fuel oil, gas, public utilities, and transportations for damage. They are also “reviewing disposal wells in the vicinity of the earthquake,” CNN reported on Saturday morning.

The state’s transportation department is quickly reviewing bridges and other highway infrastructure for possible damage.

Oklahoma Corporation Commission staff is at the office reviewing disposal wells in the vicinity of the earthquake near Pawnee.

A 5.6 level earthquake can cause minor damage to buildings and other structures according to the Michigan Technological University website. The site estimates that there around approximately 500 earthquakes in this level every year.

Putting things in perspective, Dr. Jeremy Boak, director of the Oklahoma Geological Survey, said that California experiences much stronger, but less frequent earthquakes that does Oklahoma. He went on to say, “Oklahoma is the small earthquake capital of the U.S.,” Boak clarifies. “We have a preponderance of smaller earthquakes and they appear to be a feature of this induced seismicity.” 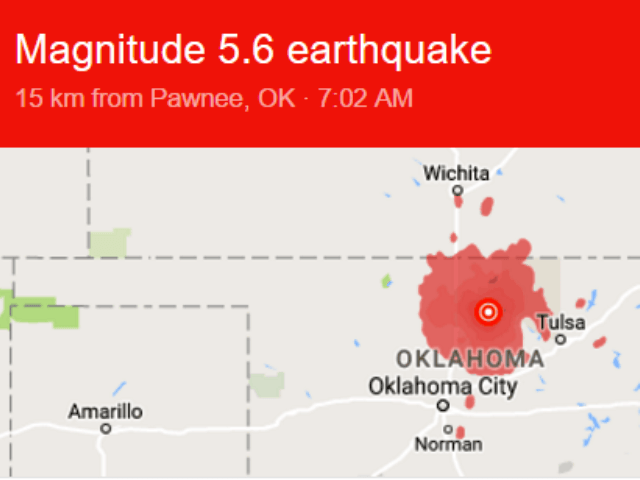 Boak denied the charge that fracking is the cause of Oklahoma’s earthquakes. “Yes, it’s true. If you shut down all fracking, you wouldn’t have the earthquake problem. But you would then shut in a whole lot of places that don’t have the earthquake problem, and you’d lose huge amounts of production,” Boak says, noting that the Bakken formation is also hydraulically fractured, but requires less wastewater disposal, has seen few to no induced earthquakes.

One Oklahoman took the quake in stride and posted a sarcastic photo of the “damage in his home.”

We survived #Earthquake 2k16. Hashtag KCforever. We will rebuild. We will press on. pic.twitter.com/teTlwixZEn

Officials with the U.S. Geological Survey said people in Texas and Oklahoma face similar earthquake risks and cited a five to twelve percent chance of a damaging quake in 2016. They explained the earthquakes in the central part of the U.S. are felt at longer distances. “The ground is softer, so the seismic waves have a much farther travel distance then an earthquake in California or Nevada,” USGS geophysicist Robert Sanders told CNN.

The USGS reported on Saturday morning:

Prior to the September 3, 2016 earthquake, the surrounding region of Oklahoma and Kansas has hosted close to 80 other M 4 or larger events over the preceding decade. Two of these were larger than M 5: a M 5.6 earthquake in November 2011, near Prague, Oklahoma, and a M 5.1 in February 2016 near Fairview, Oklahoma. The Prague earthquake resulted in 2 injuries, and over a dozen homes destroyed; it was felt in 17 states. The Fairview event was also broadly felt but did not cause significant damage. In the immediate vicinity of the September 3 event, a M 3.2 earthquake occurred on September 1, 2016, just to the southwest. Within an hour of the September 3 M 5.6 earthquake, 4 aftershocks have been located, the largest being a M3.6 event 56 minutes after the mainshock. 3 of the 4 aftershocks align on the NW-SE left-lateral plane of the focal mechanism solution.

Locations across the central and eastern United States (CEUS) have been experiencing a rapid increase in the number of induced earthquakes over the past 7 years. Since 2009 rates in some areas, such as Oklahoma, have increased by more than an order of magnitude. Scientific studies have linked the majority of this increased activity to wastewater injection in deep disposal wells in several locations. However, other mechanisms such as fluid withdrawal, enhanced oil recovery, or hydraulic fracturing processes can also result in induced earthquakes. In addition, regions with frequent induced earthquakes may also be subject to damaging earthquakes that would have occurred independently of human activity. Making a strong scientific case for a causative link between a particular human activity and a particular sequence of earthquakes typically involves special studies devoted specifically to the question. Such investigations usually address the process by which the suspected triggering activity might have significantly altered stresses in the bedrock at the earthquake source, and they commonly address the ways in which the characteristics of the suspected human triggered earthquakes differ from the characteristics of natural earthquakes in the region.

.@amyslanchik updating from White’s Foodliner in Pawnee. Big-time mess there after this morning’s quake. pic.twitter.com/eAuGsCFGBl