WASHINGTON, D.C. — Breitbart News was able to infiltrate a key planning meeting for the effort of radical groups to not only protest the inauguration of President Trump, but also to “shut it down” and disrupt the historic event. Exclusive, undercover audio reveals the radical coalition will throw everything they have at “shutting down” the Trump Inaugural Parade that spans from the U.S. Capitol to the White House. They will attempt to do so by targeting police checkpoints and preventing other Americans from exercising their constitutionally-guaranteed right to assemble and express their views.

Breitbart’s infiltration of the radical anti-Trump effort also netted a map that reveals the specific locations of checkpoints that will be targeted and possibly shut down and which specific groups are responsible for each location. The map also reveals the entire infrastructure for the radical groups and which “choke points” they deem critical to the inauguration.

Radical Occupy organizer and troublemaker Lisa Fithian was revealed in the audio as a trainer, apparently playing a role in the effort’s stated and recorded goal of “shutting that shit down” in reference to the Inaugural Parade. 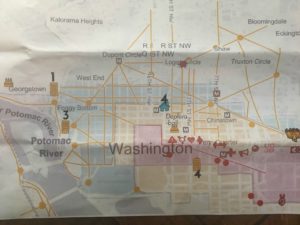 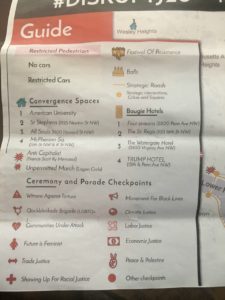 The radical left protest movement that is currently manifesting as anti-Trump, as well as Lisa Fithian, have long histories and methods of operation that can be examined to better understand how they will act in their effort to shut down the Inaugural Parade.

Fithian was a key trainer at the 2008 Republican Nation Convention (RNC) in St. Paul, Minnesota. In that instance, the radical groups used a red, yellow and green team strategy in an attempt to shut down the RNC. Red teams consisted of black bloc anarchists intent on attacking police and Republicans. Yellow teams consisted of “arrestables,” or non-violent activists willing to get arrested for civil disobedience, and the green teams consisting of average liberal protesters who could be manipulated en masse without ever knowing they were pawns in the red and yellow teams’ radical efforts to prevent other Americans from assembling and celebrating their views.

In the instance of the 2008 RNC, the radicals used the mainstream liberal marches as cover for their illegal behaviors. They waited until the liberals (green team) were in the street. The radicals would have key persons manipulate the green team to stop in the street and the yellow team would use the green team for cover as the arrestables handcuffed and locked themselves in human chains across critical streets that buses of Republican delegates needed to get to the RNC.

Once the yellow team was ready, the red team would enter the crowd of the unknowing green team and remove their masks to blend.

This history indicates that the radical anti-Trump protesters will use the permitted marches of liberals as cover for their efforts to shut down the Inaugural Parade and possibly other events. It indicates that human chains will be used to block the police checkpoints; thereby preventing Republicans from entering the parade areas and possibly providing cover for radicals who wish to throw liquids and other items over and across the barricades that parade-goers will depend on for their safety. History suggests the groups will use handcuffs to lock on to physical structures and to each other in their effort to shut down Trump’s Inaugural Parade.

DISCLOSURE: The author previously worked undercover with law enforcement and in efforts to prevent many of the groups and individuals associated with J20 from shutting down the 2008 RNC mentioned in this piece.