A new report from U.S. Customs and Border Protection indicates a significant decrease in border apprehensions along the U.S./Mexico Border of more than 60 percent since the month President Donald Trump took office. Total apprehension for March declined from the previous month by 30 percent. 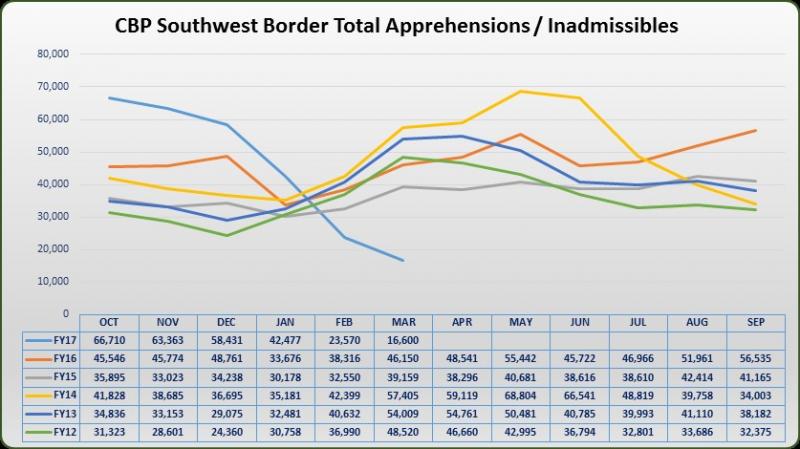 Border apprehensions steadily increased in the nine months leading up to the presidential election in November, reaching a peak of 66,710 in October 2016. Since President Trump’s election on November 8, each month shows a decline in apprehension. The two full months following the inauguration show a dramatic drop to levels not seen in the past five years. Apprehensions decreased by more than 75 percent.

Border Patrol agents arrested 16,600 illegal border crossers during the month of March, officials stated. The February report indicated 23,570 apprehensions along the southwestern border with Mexico. This represents the lowest number of border apprehension in the past five years. The apprehension of Family Unit Aliens (FMUA) decreased this month by 64 percent from the previous month while the apprehension of Unaccompanied Alien Children (UAC) fell by 46 percent.

Year-to-date (YTD) comparisons between FY 2016 and FY 2017 remain distorted by the massive numbers of border crossing apprehensions during the final months of the Obama Administration. Total Apprehensions show an increase in YTD comparisons 4.77 percent. FMUA apprehensions are still up by a shocking 82 percent in YTD numbers but have fallen by 88 percent since President Trump took office. UAC YTD apprehensions are up by three percent over the same period last year but fell by 76 percent since January’s report.

The federal government defines FMUA as the number of individuals (either a child under 18 years old, parent or legal guardian) apprehended with a family member by the U.S. Border Patrol. The agency defines UAC as any minor apprehended under the age of 18.