Border Patrol agents assigned to the Falfurrias Checkpoint in Brooks County, Texas, discovered more than $2 million-worth of cocaine being smuggled in a pickup truck.

The Rio Grande Valley Sector agents observed a gray truck approaching the Falfurrias Checkpoint. A K-9 agent alerted to the possible presence of drugs in the truck. Agents directed the driver to move his pickup truck to a secondary inspection station for examination, according to information provided to Breitbart Texas by Supervisory Border Patrol Agent Marlene Castro on Monday evening.

The driver pulled up to the inspection station and agents conducted a search of the vehicle. The agents discovered hidden compartments in the rear quarter panels of the truck. The search turned up 26 bundles of what would later test positive to be cocaine, officials stated. 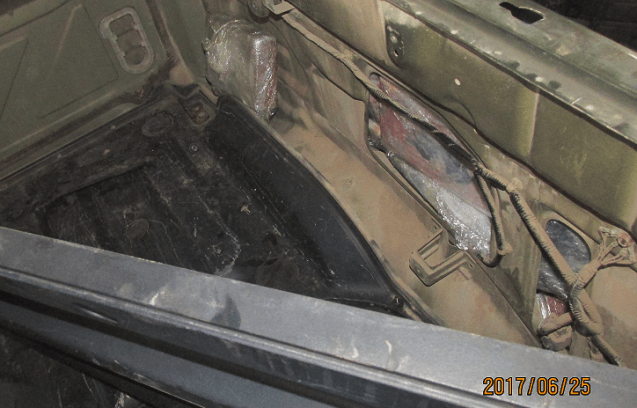 The agents arrested the male driver of the truck and seized the drugs and truck for evidence.

The cocaine weighed more than 65 pounds, Castro stated. She estimated the street value to be $2.1 million.

Last week, other agents assigned to the Falfurrias Station in Brooks county worked with the local sheriff’s office to find and recover the bodies of three illegal immigrants who appeared to have died from exposure to the Texas summer heat and lack of water, Breitbart Texas reported. The three recently deceased bodies were discovered in a single day.

Brooks County Sheriff Benny Martinez told Breitbart Texas he is very concerned about the death toll potential as they move into the hottest months of the year. “We are at 24 (bodies recovered) so far this year,” Sheriff Martinez said. “This is well ahead of where we were this time last year and we ended last year with 61.”

Martinez said that because of Border Patrol’s increased presence in the county and the work of his deputies, human smugglers are dropping their “cargo” further away from the checkpoint. “That means they have further to walk, more days in the fields,” Sheriff Martinez explained. “The longer they are out there, the more at risk they are. These coyotes don’t care about the people they smuggle. If they fall behind or become injured, they are just left behind to die.”

Border Patrol agents have also been successful in rescuing some of these migrants before they succumb to the heat and dehydration. Agents rescued four migrants in the Kingsville and Falfurrias operational areas last week. Castro said their agents are on high alert because of the increasing temperatures that are now reaching into the high nineties.