The apprehension of illegal aliens by Border Patrol agents along the southwest border with Mexico increased for the third straight month. Figures rose from 16,087 in June to 18,198 in July – a 13.12 percent gain. 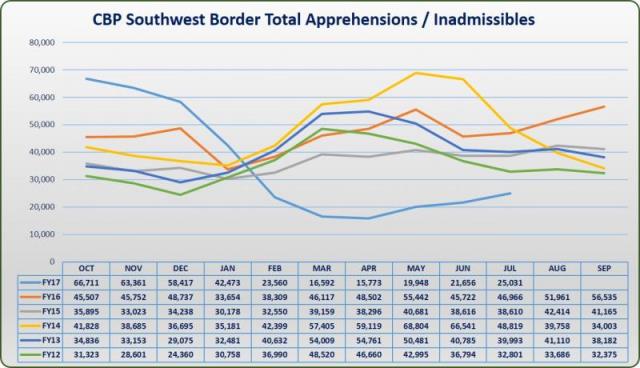 U.S. Customs and Border Protection chart showing the total apprehensions and inadmissibles along the southwest U.S. border with Mexico.

Apprehensions of illegal aliens by agents working the border region began to fall following the election of Donald Trump as President of the United States in November. The number dropped even more dramatically beginning in January and continued falling until April when they reached a historic low of 11,125. Many believe these numbers took a dramatic drop in anticipation of Trump’s promise to build the walls along our border and to rigorously enforce immigration laws inside the country. However, the past three months’ reports show the threat of increased border security and enforcement may not be enough.

During the peak months of the summer heat when the number of apprehensions historically decline, Unaccompanied Alien Children (UAC) and Family Unit Aliens (FMUA) arrests rose dramatically, according to the Southwest Border Migration Report released this week by U.S. Customs and Border Protection officials.

Similarly, the apprehension of FMUAs (defined as one or more minors traveling with a single parent or guardian) increased dramatically from June to July this year. FMUA apprehensions rose from 2,322 in June to 3,397 in July – a 46 percent increase. FMUA apprehensions fell from a high in December of 16,139 to a low-point in April of 1,118 before turning around and starting back up.

The Rio Grande Valley (RGV) Sector in South Texas continues to be the focal point for human smugglers to deliver their cargo of minors and families. Of the 13,115 FMUAs apprehended along the entire southwest border with Mexico in July, 8,718 occurred in the RGV sector (66 percent). Agents arrested 4,082 UACs in the RGV Sector in July. This represents 61 percent of the 6,705 UAC apprehensions in July. Of the 46,182 total apprehensions of illegal aliens along the southwest border, 22,642 occurred in the RGV Sector (49 percent).

CBP officials point out the total number of apprehensions and inadmissible persons apprehended this fiscal year along the southwest border declined by 22 percent when compared to FY 2016 numbers. The July apprehension and inadmissible numbers are down by 47 percent from one year ago when they were at historic highs.