An illegal immigrant fled to Mexico after he allegedly murdered his pregnant wife and a roommate in Phoenix, say police. He then reportedly kidnapped his two young sons, triggering an Arizona Amber Alert early Saturday.

Dimas Coronado, 47, an illegal immigrant from Mexico, was named in an arrest warrant after investigators from the Phoenix Police Department developed probable cause for three counts of homicide. Coronado’s estranged wife, Oralia Nunez Gonzalez, 24, and her roommate, Omar Gonzalez, 34, (no relation), were discovered wounded inside a trailer home by a relative of Nunez after arriving home from work. When police responded, they discovered Gonzalez was already deceased and Nunez, who was approximately eight months pregnant, was transported to a local hospital where she succumbed to her gunshot wounds. The warrant for the three counts of homicide includes one for the death of the unborn child.

During the investigation, it was determined that 8-year-old Victor Coronado-Nunez and 5-year-old Jonathan Coronado-Nunez were reportedly kidnapped by their father after the alleged slayings—triggering an Amber Alert for the boys. Police confirmed on Sunday that Coronado and Nunez were married but separated for two months. Officers previously responded multiple times to Nunez’s home for domestic violence calls, according to Phoenix Police Department spokesman, Sgt Armando Carbajal. 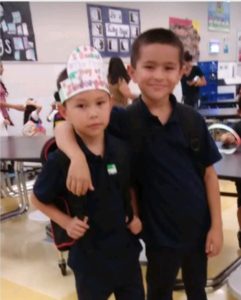 It is believed that after the alleged killings, Coronado fled with his children in a Chevy Silverado, silver in color, with a temporary tag. It was found a few blocks away where he reportedly switched to an older model aqua green Ford truck, Mexican license plate ZUD-71-64, from either Chihuahua or an unknown Mexican state.

“We have reasons to believe Mexico was an option for the suspect as he had family there,” Sgt. Carbajal said.

According to Breitbart Texas law enforcement sources and Mexican media reports, Coronado is believed in Mexico because he was born and raised there and his family lived in the United States for less than two years prior. Nunez and her children arrived in the United States on a visa, but Coronado entered the country illegally, law enforcement sources said. Breitbart Texas emailed the Phoenix Police Department media relations bureau to check on the immigration status of Coronado, but received no response. The Phoenix PD rarely releases any immigration status of suspects, including violent felons and major narcotics violators.

Coronado has a violent history in his native Mexico and was previously arrested for murder, but fled to the United States with his family, according to local media reports. The fugitive reportedly worked as a cartel hitman and fled to the United States because a team of assassins from Casas Grandes, Chihuahua, were hunting him. The brother of victim Nunez, Ramon Nunez Gonzalez, also told Mexican media that his sister was previously beaten by Coronado and received death threats via text message. According to the victim’s brother, his sister took out an order prohibiting her husband from being near her or the boys.