U.S Customs and Border Protection (CBP) officers and Border Patrol agents seized approximately 140 pounds of methamphetamine, heroin, and fentanyl at the Arizona border during three separate inspections on the afternoon of September 27.

The first incident occurred early Thursday morning when U.S. Customs and Border Protection Officers assigned to Arizona’s Dennis DeConcini Port of Entry in Nogales referred a 50-year-old male to a secondary inspection of his Ford SUV, according to information obtained by Breitbart Texas from CBP officials. A CBP narcotics detection canine alerted to a scent within the vehicle’s roof that it is trained to detect. 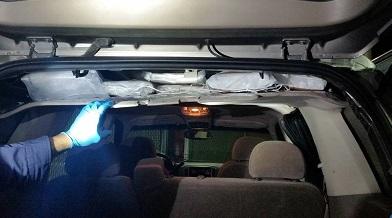 During the secondary inspection, officers removed several packages of drugs which were identified as approximately 91 pounds of methamphetamine. Officials said the methamphetamine is worth almost $272,000. The officers also found more than five pounds of heroin with an estimated value of almost $144,000. Officers seized the drugs as well as the vehicle and arrested the male driver. Officers turned the suspected drug smuggler over to U.S. Immigration and Customs Enforcement’s (ICE) Homeland Security Investigations (HSI).

The second incident occurred Thursday afternoon when CBP officers working Arizona’s Port of Entry at Lukeville, Arizona, referred a 36-year-old male for a secondary inspection of his Ford truck as he applied to re-enter the United States from Mexico. A CBP canine alerted to an odor it is trained to detect, leading officers to the discovery of approximately 18 pounds of methamphetamine within the dashboard.

Officials estimated the value of the methamphetamine to be more than $53,000. They also seized a nearly 2.5-pound package of heroin — worth more than $65,000 — along with a quarter pound of suspected fentanyl worth more than $11,000. Officers arrested the male driver and turned him over to HSI special agents. Officials seized the drugs and the vehicle.

On Thursday night U.S. Border Patrol agents assigned to the Interstate 19 Immigration Checkpoint outside of Nogales observed a Chevrolet Malibu occupied by two males, and one female approaching the checkpoint for inspection. After a canine agent alerted to an odor it was trained to detect emitting from the vehicle, the agents referred the driver to a secondary inspection station, officials stated.

A search of the vehicle led to the discovery of 21 bundles of methamphetamine hidden throughout the dashboard of the vehicle. The bundles had a combined weight of more than 22 pounds with an estimated street value of $538,800. The agents arrested all three individuals and turned them over to HSI special agents for investigation and possible prosecution. The agents seized the drugs and vehicle.

Breitbart Texas reported on two major seizures in northern Mexico totaling over 120,000 pounds which were believed to belong to the Sinaloa Cartel also known as Cártel del Pacífico. The seizures included a major drug lab with 50 tons of methamphetamine seizure on August 16. The second report covered the finding of 10 tons of methamphetamine on August 22. Both incidents occurred in the northern state of Sinaloa.