Tucson Sector Border Patrol agents arrested a group of 11 migrants who were allegedly smuggling 820 pounds of marijuana into the U.S. Officials report one of the illegal aliens is wanted by a court in Marion County, Oregon.

Agents patrolling near a mountainous canyon southeast of Arivaca, Arizona, received information Wednesday afternoon about a group of people wearing camouflage and carrying large backpacks. The agents called in a helicopter aircrew from U.S. Customs and Border Protection Air and Marine Operations. The search led to the discovery of the group of 11 migrants from Honduras, Guatemala, and Mexico. Officials discovered 36 bundles of marijuana weighing about 820 pounds, according to information obtained from Tucson Sector Border Patrol officials. 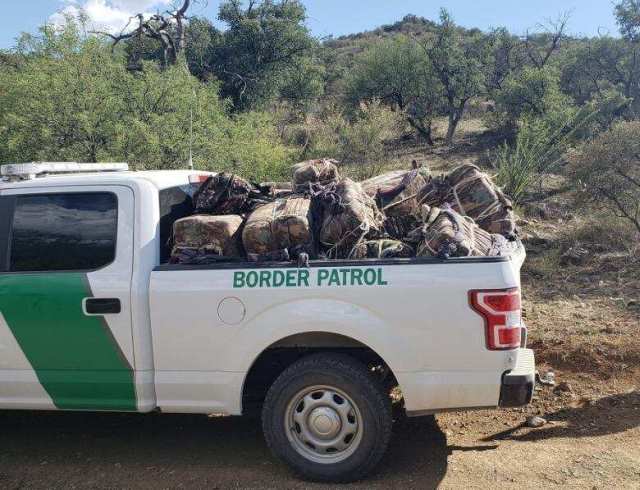 The agents arrested the 11 illegal aliens who ranged in age from 15 to 38. They will be charged with drug smuggling and immigration violations.

During a biometric background investigation at the Border Patrol station, agents learned one of the Guatemalan migrants has an active warrant from a court Marion County, Oregon. Marion County is a sanctuary jurisdiction that does not honor immigration detainers placed by ICE.

The warrant on the migrant is related to charges of burglary, domestic violence assault, and contempt of court, officials reported. Border Patrol agents notified the court and placed 25-year-old Mario Felipe-Perez into custody. He awaits extradition to Oregon authorities.

Breitbart News reported extensively on crimes by illegal aliens and by previously deported aliens who are stopped by Border Patrol agents from successfully re-entering the United States.

In July, Tucson Sector Border Patrol agents arrested another Guatemalan migrant who previously served time for a murder-for-hire scheme in Pennsylvania and a Mexican national convicted of sexual offenses against a child in New York, Breitbart Texas reported.