Mexico’s government announced the detention of 402 caravan migrants during a violent rush at its southern border on Monday morning. Authorities are searching for more than 50 who ran into the jungle.

In a statement released by Mexico’s National Immigration Institute (INAMI), officials revealed that on Monday morning, 500 migrants rushed the country’s southern border by crossing the Suchiate River and then tried to force their way past Mexican National Guardsmen and immigration officials. The Mexican government claimed the group was carelessly encouraged to cross by caravan organizers and did not take into account the risks that such actions presented to women and children.

During his morning press conference, Mexican President Andres Manuel Lopez Obrador pushed back against criticism about immigration authorities holding the migrants. Lopez Obrador said authorities are working to not violate human rights, but his opponents are wishing otherwise.

As Breitbart Texas reported, a series of videos from the scene revealed the intensity of the rush and the efforts by Mexican authorities to hold back the groups.

According to the INAMI statement, out of that group of 500, officials detained 402 primarily from Honduras. The migrants were taken to a facility for food, medical care, and housing. They will go through an immigration process where they could be eventually deported back to Honduras. 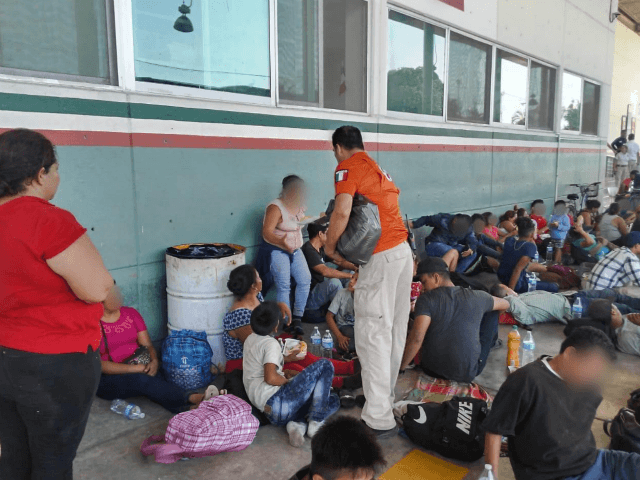 After the rush, a group of 58 managed to avoid capture by running into the jungles of southern Mexico. Search parties made up of INAMI rescue agents were sent out. The statement also revealed that a group of about 40 turned back on their own during the initial push at the river.