Two Texas men are charged in a federal court for an alleged nationwide neo-Nazi conspiracy that targeted journalists and public officials with threats and intimidation. The conspirators allegedly engaged in “swatting” calls against journalists, particularly those who are Jewish or of color, and other high-level public officials.

FBI agents filed a criminal complaint in the U.S. District Court for the Southern District of Texas, attached below, against two Texas men, Kaleb Cole, a 24-year-old resident of Montgomery, and John Cameron Denton, a 26-year-old man who also lives in Montgomery, along with two other men. The law enforcement agency carried out arrests in four states to apprehend all of the co-conspirators in the plot.

In the Houston area, FBI agents raided a home in Montgomery, Texas, where they arrested Cole and Denton.

The complaint alleges a campaign by members of the neo-Nazi group known as the Atomwaffen Division (AWD) to threaten and intimidate Jewish and other journalists “of color,” according to court documents. The intimidation tactics included the mailing of threatening posters to the houses of journalists and making “SWAT calls” to send a large law enforcement response to their homes or places of worship, the complaint states.

“Swatting” is an intimidation tactic where the attacker calls emergency dispatchers and claims people at an address are in imminent danger. The law enforcement agency typically responds with an overwhelming show of force.

In an FBI recording referenced in the complaint, Cole allegedly tells the AWD members on a September 2019 leadership call in Washington state, “The matter of these nosy reporters coming into our daily lives, where we work, where we live, where we go in our spare time. We must simply approach them with nothing but pure aggression. We cannot let them think that they can just … that that it’s safe for them to just come up to us, and fuck with us. We cannot let them think they are safe in our very presence alone.” 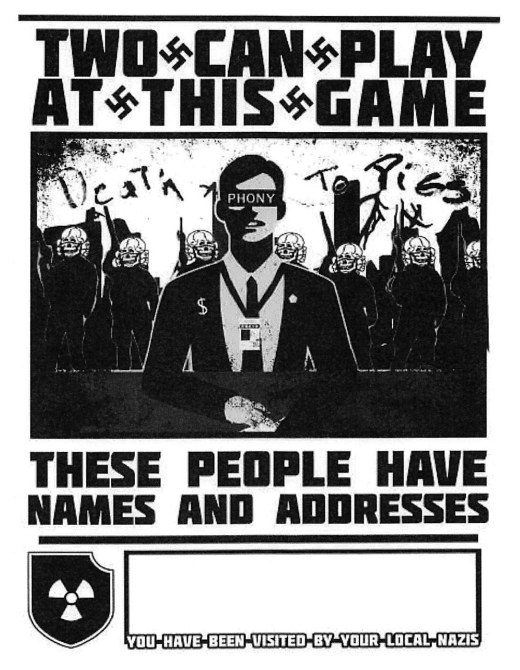 FBI officials said this statement came in response to a journalist approaching an AWD member at a music festival in Texas. The journalist reportedly was working on the Documenting Hate news series.

It appears Cole became angered by media outlets calling AWD a threat to the public, the complaint continues.

Shortly after this, Kole leaves Washington and reportedly travels to Texas where, in November 2019, police in Post, Texas, stopped Cole and another member referred to in the complaint as “A.B.” The two men were reported to be headed to Houston to meet with another member. Police arrested A.B. for possession of a firearm by an unlawful user of a controlled substance. The police allegedly seized four firearms and about 2,000 rounds of ammunition. Cole continued to the Houston area where he began his plans to deliver “threatening messages to journalists’ homes and media buildings,” the complaint states.

“We’re coordinating this nation wide [sic] operation called Operation Erste Säule named after the first pillar of stat[e] power, AKA the media,” conspirator Cameron Brandon Shea reportedly wrote. “We will begin postering journalists’ houses and media buildings to send a clear message that we too have leverage over them … The goal, of course, is to erode the media/states air of legitimacy by showing people that they have names and addresses, and hopefully embolden others to act as well.”

FBI agents said Cole and Shea were the primary planners of the plot and that Cole had access to the “target list,” according to the court files. He allegedly developed the threatening posters that were to be left at the homes of the journalists and provided instructions to AWD members as to how to find the home addresses of the journalists to be targeted.

The conspirators communicated on several occasions they were targeting Jewish journalists, according to the complaint. Co-conspirator Johnny Roman Garza claimed to have found a “leader of an ‘association of black journalists'” in his state.

By December 2019, the posters were developed and the plan shifted from actual visits to the homes of journalists to mailing the threatening posters. 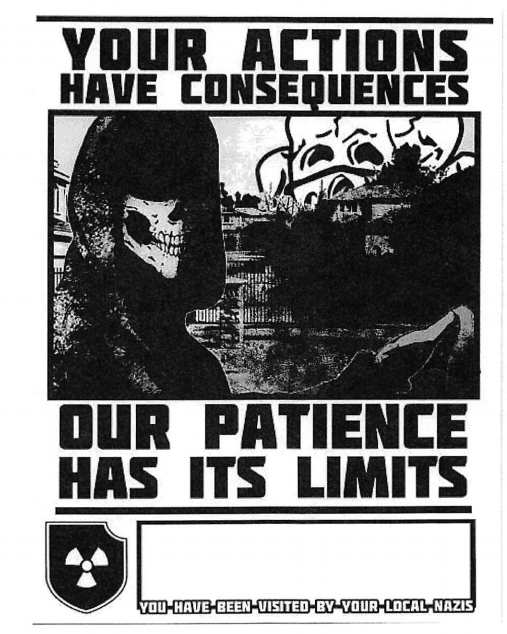 In January 2020, the operation began to unfold and FBI agents received complaints from a Seattle-area reporter and an employee of the Anti-Defamation League  (ADL). The reporter alleged received a poster titled, “Two Can Play At This Game.” The poster included his name, his home address, and his cell number, the complaint states. The ADL employee said he received a poster titled, “Your Actions Have Consequences.” It also included his home address.

The Houston Chronicle reported that Denton and another alleged conspirator worked together to execute three “swatting calls” against a cabinet official’s home in Northern Virginia, and at Old Dominion University. They also allegedly targeted a Baptist church.

The group then targeted a Pulitzer Prize-winning journalist who works for ProPublica and the company’s New York City office, the KHOU CBS 11 reported. Denton said he would electronically alter his voice while making the SWAT calls.

“Our responsibility right now is resistance, anything that happens after that we’ll simply adapt to it and work with what we have,” Denton allegedly told followers of the SeigeKultur website.

The conspirators were set to appear in courts in Houston and Seattle this week.