An Oklahoma judge issued an ex parte emergency order to have a mother’s children “immediately picked-up.” Her crime, she says, is her employment at a medical clinic.

An ex parte ​order is one issued without all the parties having notice.

Katie Spencer warned in a Facebook post: “Just a heads up to nurses, doctors, firefighters, police officers, and other first responders who have children and sneaky exes…watch your backs!”

Spencer’s former spouse filed an “Emergency Motion to Modify Custody and for Pick-Up Order Due to Respondent Spencer’s Exposure to Coronavirus.”

The March 20 order, which led to the law enforcement pick-up of the medical worker’s children, states: “the Petitioner alleged, and submitted documents in support, that the Respondent alleged proximity to Coronavirus.”

“The Court takes judicial notice there is at present no vaccination, though children are generally less susceptible to the virus’ effects it is highly contagious and lethal,” the judge added. 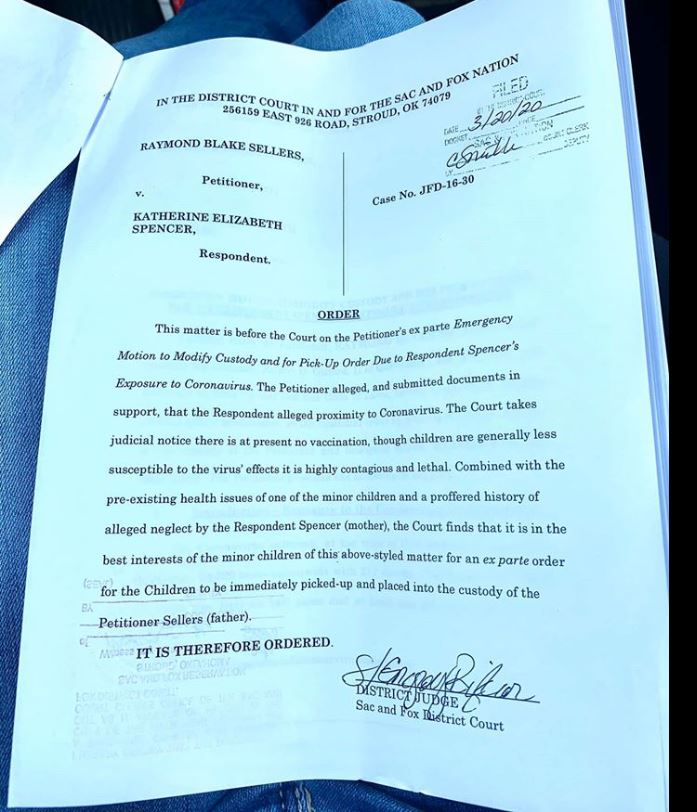 A photo of the court order Spencer says was used by police to pick up her children. (Photo: Facebook/Katie Spencer)

District Judge Michael C. Smith said he found the order to be in the children’s best interest because of the combination of “pre-existing health issues of one of the minor children and a proffered history of alleged neglect by the Respondent Spencer (mother).”

In her Facebook post, Ms. Spencer denies the allegation of neglect and added: “I do NOT have a history of abuse.” She asserted that her ex has a history of domestic abuse by strangulation.

Court records obtained by Breitbart Texas show that the father, Raymond Blake Sellers, had two protective orders filed against him. One was in Seminole County, Oklahoma, in January 2017. There was an Agreed Order of Dismissal signed in that case in March of that year. A protective order with a different female and a minor child was filed in February 2018 in Oklahoma County. It was dismissed at the request of the petitioner less than two weeks later. Sellers also had a felony charge for domestic abuse by strangulation in March 2018 in Oklahoma County. The criminal charge was dismissed in November 2018.

The Intro on Ms. Spencer’s Facebook page lists that she works at the St. Anthony Family Medicine Clinic and the Chickasaw Nation Medical Center in Oklahoma.

Oklahoma News 4 went to the judge’s home to ask him about the order. The media outlet reported, the judge said that “it wouldn’t be proper to discuss the facts of the case.” The judge added, “He even put a gag order on all parties because he said there has been a lot of misinformation circulating about the details of the case.”

The judge issued a gag order on March 21 prohibiting the diffusion of any information about the people or the issues in the case, the Oklahoma news outlet reported.