A search and rescue operation involving federal, state, and local law enforcement agencies led to the rescue of two migrants lost in the Arizona desert near Gila Bend.

Shortly before midnight on Sunday, a local 911 operator received an emergency call from two men claiming to be lost in the desert. The dispatcher transmitted information about their alleged location to Ajo Station Border Patrol agents who initiated a search and rescue mission, according to Tucson Sector officials. 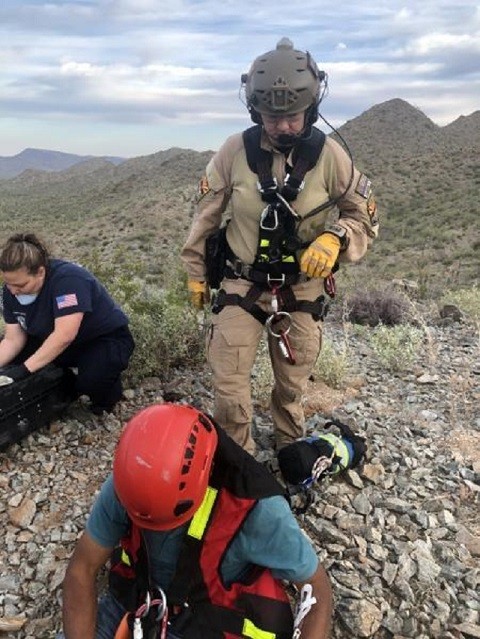 An Arizona DPS paramedic and a Gila Bend Fire Department EMT treat two illegal aliens and prepared them for airlift by the DPS helicopter to a local hospital. (Photo: U.S. Border Patrol/Tucson Sector)

The helicopter lowered the two EMTs, one Border Patrol agent and a Gila Bend Fire Department firefighter, to the two distressed migrants. The EMTs stabilized the men by about 6 a.m. An Arizona Department of Public Safety helicopter crew with a paramedic on board arrived overhead. The two men were lifted into the helicopter and transported to a local hospital, officials reported.

Border Patrol agents confirmed both of the men were illegally present in the United States. Once cleared by hospital staff, they will be processed for immigration violations. Under current Coronavirus protection protocols, it is likely the two men will be returned to Mexico. Border Patrol officials did not disclose the nationality of the two men.

“This rescue illustrates the expertise and dedication, not only of the Border Patrol Agents at the Ajo Station but of the first responders that serve our communities”, Ajo Station Acting Patrol Agent in Charge Rob Allen said in a written statement. “With rising temperatures in southern Arizona, they are a beacon of hope to those who find themselves lost or stranded in the desert.”

Tucson Sector officials reported that their agents rescued at least 15 people in eight incidents across southern Arizona since Friday.