Officials loyal to a now imprisoned former Mexican border governor were accused of contract rigging for equipment intended for local government hospitals, according to leaked documents exclusively obtained by Breitbart Texas. Officials are also believed to have profited from government supplies of fuel and asphalt.

Breitbart Texas obtained exclusive access to documents from Mexico’s Attorney General’s Office, formerly known as PGR, which include statements from witnesses that shed light on acts of corruption and alleged ties to cartels. The investigation is largely focused on the term of former Tamaulipas Governor Eugenio Hernandez Flores (2005-2010), who is currently in a Mexican prison fighting extradition to Texas for money laundering charges.

Some of the statements point to high-ranking members of the Gulf Cartel and Los Zetas having sway in selecting police chiefs in their particular regions. Other statements explain how allegedly rigged contracts funneled government funds back to officials close to the former governor. 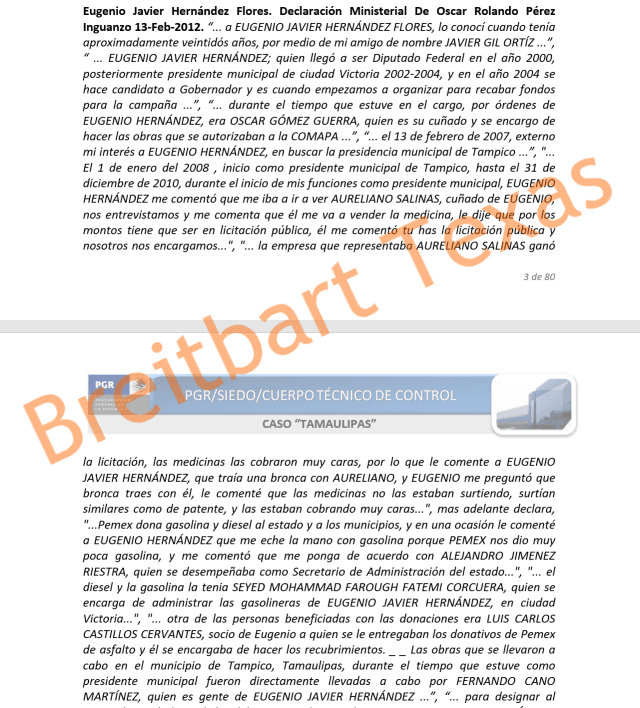 In one of the statements, former Tampico Mayor Oscar Rolando Perez Inguanzo testified that after taking office, then-Governor Eugenio Hernandez sent his brother-in-law for a meeting. The conversation dealt with ordering the mayor to have companies tied to the governor’s family be the main supplier of medical supplies for the local hospital system. The mayor would open bidding, only to have the governor’s relatives rig the process so they could win and overcharge.

Perez Inguanzo complained to the governor that in addition to overcharging, his relatives were swapping brand name medications for generics, or completely failed to deliver. The mayor also claimed Hernandez’s associates redirected fuel donated by PEMEX intended for city and state uses to gas stations run by Hernandez loyalists.