A Texas sheriff’s cold case unit is bringing comfort and some degree of closure to the families of victims who have long-since gone missing. In the past year, the unit uncovered two victims who had been unidentified for 30 and 40 years, respectively.

Williamson County Sheriff Robert Chody took a different approach to cold cases after being elected to the office in November 2016 by utilizing a volunteer staff of retired detectives and technology resources.

“We always worked cold cases in the past,” Sheriff Chody told Breitbart Texas in a phone interview on Wednesday. “But historically, it fell on detectives who were focused on working currently active cases.”

Chody said he now as a staff of 26 volunteers who work every day on dormant cases that are years or even decades old.

“We now have retired law enforcement officers — experienced investigators — who volunteer their time to actively focus on developing these cold cases,” Chody explained. “They work as their schedule allows, but we have someone working on these cases every day.”

The efforts of this unit bore fruit in the past year with the identification of two victims who remained unidentified for 30 and 40 years respectively.

In January, the detectives identified the body of a young girl who had been known as “Corona Girl” since her body was found in September 1989, Chody said. Detective work and DNA testing led to her identification as Sue Ann Huskey. County officials reported the girl was 17 at the time of her death. The sheriff’s office stated the cause of death to be homicide by firearm.

Finding her identity was only part of the problem, Chody explained. Once they identified Huskey as the victim, the detectives then had to figure out what happened to her body after death.

“The detectives combed through old newspaper accounts, photos, and county records to try to determine what unmarked grave the young girl had been buried in,” he explained. “The detectives’ efforts led to the finding of her grave.”

Huskey’s mother, Sue Bryant told KVUE ABC in January, “I just – I know where she’s at now. She was my baby daughter.”

This week, the family got another step closer to closure and comfort as Rockdale Memorial Company donated and installed a headstone on her previously unmarked grave. 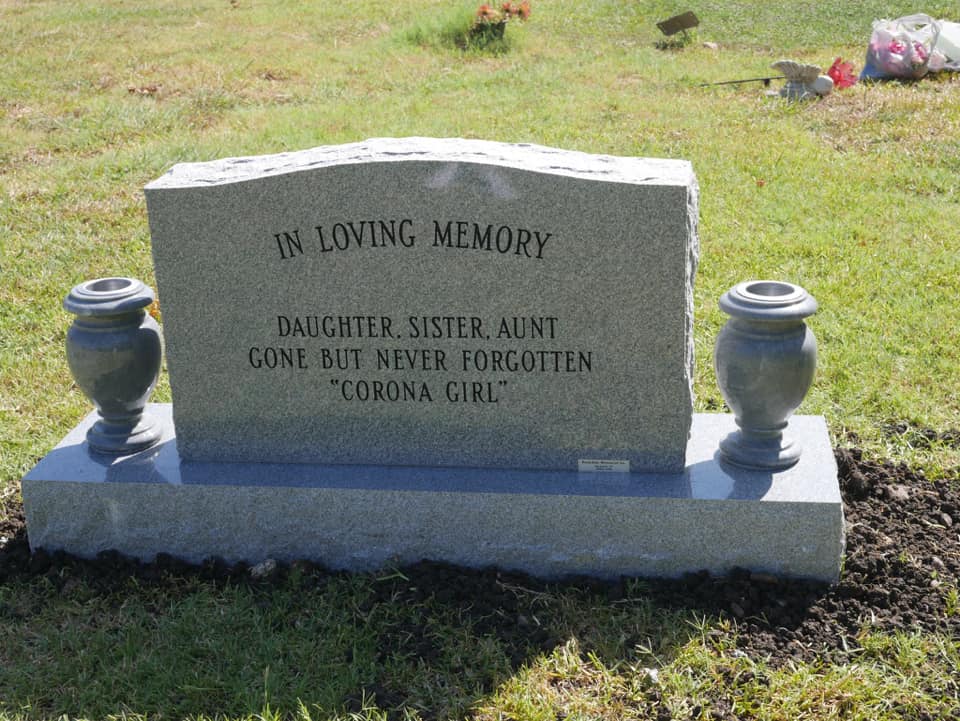 A headstone donated by Rockdale Memorial Company marks the grave of a woman known only as “Corona Girl” for thirty years. (Photo: Williamson County Sheriff’s Office)

“Today, Sue Ann has a proper headstone thanks to the generosity of Rockdale Memorial Company, who donated the headstone,” Chody said in a Facebook post.

Chody said that since his detectives identified the victim, new doors opened on the case that could eventually lead to justice.

“Knowing who the victim was gives the detectives more people to talk to and more evidence to examine,” the sheriff explained. “This is the kind of opportunity that helps turn cold cases into solved cases.”

The cold case unit had another successful result in August 2019 when DNA and new forensic drawings led to the identification of a woman known only as “Orange Socks” since October 1979 was identified as Debra Louise Jackson –a then 23-year-old woman from Abilene, Texas.

Jackson’s strangled body was found near Interstate 35 north of Georgetown, Texas, in a concrete drainage ditch, the local ABC affiliate reported at the time. A court convicted serial killer Henry Lee Lucas of her murder in 1984. He later recanted and claimed he did not kill her.

Crucial break in the 40 year old case commonly referred to as “ORANGE SOCKS.” Victim is now positively IDENTIFIED after 4 decades. A press conference is scheduled tomorrow August 7th @ WilCo SO ,2pm. Expect official press release in the morning. No other info until conference. pic.twitter.com/k8fRl39bnP

“Commercially available databases can be an invaluable resource in helping these victims and their families,” Chody said. “However, due to recent changes, customers have to ‘opt in’ for the DNA data to be accessed by law enforcement investigators.”

Of the various DNA services used across the years both locally and nationally, a few of the pivotal players in the investigation were the DNA Doe Project and GEDMatch. Though plenty of DNA was received through the investigation, a lot of it was unusable due to an “opt-in” feature through GEDMatch. Officials urged all users of the program to make sure they are opting in, which helps researchers in their investigations.

Though researchers were able to find a genetic match from a possible cousin whose distance was too far to confirm, it was her sister that called in in June and provided the breakthrough piece of information. She provided a saliva sample, which was returned as a confirmed match in August of this year.

Sheriff Chody said he utilizes asset forfeiture funds available to his office to fund the resources required for this volunteer detectives to be successful.

“We started this two to three years ago and now we are realizing the success these families have been seeking for decades,” The sheriff stated. “We have 26 experienced investigators who retired from federal, state, and local law enforcement agencies from all over the county who volunteer their time to help these victims and their families. The families of Sue Ann Huskey and Debra Lousie Jackson now have a small sense of closure after waiting all these decades for answers.”

“Our philosophy is to turn over every possible rock to find relief and answers for families who have lost a loved one,” Chody concluded. “Our entire department will do whatever it takes to bring them comfort, closure, and justice.”