Rio Grande Valley Sector Border Patrol agents seized more than 330 pounds of methamphetamine and cocaine at two interior immigration checkpoints located about 80 miles from the border with Mexico. The seizures took more than $9.5 million dollars worth of drugs out of the hands of cartel-connected drug traffickers.

Kingsville Station agents assigned to the Javier Vega, Jr. Immigration Checkpoint on U.S. Highway 77 on Thursday referred the driver of a passenger car to a secondary inspection station after a K-9 alerted to an odor it is trained to detect, according to Rio Grande Valley Sector Border Patrol officials. During a search of the vehicle, the agents found multiple bundles of drugs inside the gas tank. 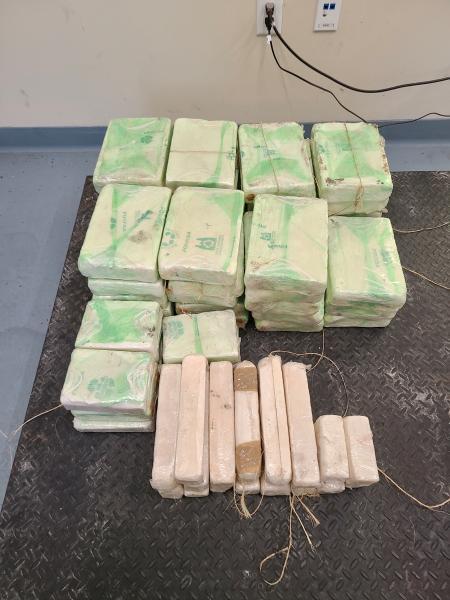 The agents tested the drugs and identified them as methamphetamine. The load weighed nearly 20 pounds and had an estimated street value of $632,000, officials reported.

The agents arrested the 17-year-old driver and turned him and the case over to the Kenedy County Sheriff’s Office for prosection.

Later that day, Falfurrias Station agents assigned to the U.S. Highway 285 checkpoint observed a tractor-trailer approaching for inspection. During the initial interview, a Border Patrol K-9 alerted to an odor coming from the fuel tank. The agents referred the driver to the secondary inspection area for further investigation.

A search of the rig led to the discovery of liquid methamphetamine inside one of the fuel tanks. The agents arrested the driver and turned the case over to Drug Enforcement Administration special agents for further investigation. A HAZMAT team responded to the scene to extract the dangerous drugs from the tank. The weight and value have yet to be disclosed.

Later in the afternoon, Falfurrias Immigration Checkpoint agents referred another tractor-trailer rig to a secondary inspection following a K-9 alert. The agents searched the rig and found more than 60 bundles of drugs. The agents identified the drugs as methamphetamine that weighed more than 180 pounds. Officials estimated the value of the methamphetamine to be $4.5 million. The agents also turned this case over to DEA agents for investigation.

On Friday morning, Falfurrias Immigration Checkpoint agents observed a Ford F250 approaching for inspection. Yet another K-9 detection led to the referral of the driver to a secondary inspection station. The agents searched the pickup truck and found 50 bundles suspected to be filled with cocaine. The packages weighed more than 130 pounds and have an estimated street value of about $4.4 million, officials reported. The agents also turned this case over to the DEA.

In total, the agents seized 330 pounds of methamphetamine and cocaine in addition to the yet unclassified load of liquid methamphetamine. The value of these drugs exceeded $9.5 million.